Taylor Wagner, front, of Chesterfield, Ind., heads back up the steps of Lucas Oil Stadium as he nears the end of his 9-11 Memorial Climb. Wagner made the climb on April 20, 2012, in Indianapolis, in full gear, for a fallen firefighter whose name he selected when he arrived to participate. In the background are family members and friends who came to support his effort. (Photos by Jodi Magallanes)

A sea of fire engines, fire rescue equipment, educational speakers and entertaining events vied for an audience at the FDIC national gathering of firefighting professionals in April. But only one received big-screen coverage.

From several states and a few foreign countries they made their way to Indianapolis — most, to train for the professional dangers they confront almost every day and to linger in front of state-of-the-art tools of the trade. But around four dozen men and women also attended expressly for the opportunity to hustle and sweat in memory of firefighters for who a “call to serve” carried the highest price.

The National Fallen Firefighters Foundation launched the second season of 9-11 Memorial Stair Climbs on the fifth day of the weeklong event. On a 96- by 35- foot video board normally reserved for NFL players and pop stars, casual observers could watch as firefighters and paramedics labored up, across and down three flights of steep bleacher stairways once, twice and then several times more to honor the sacrifice made by responders who raced to the 1 and 2 World Trade Center towers on Sept. 11, 2001.

Six years earlier, several members of the Denver, Colo., fire department conceived the idea as both a way to condition and a way to honor comrades who lost their lives in the modern-day, national tragedy. They never thought that in 2012 they would be organizing several grueling climbs yearly that would be carried out by thousands of fellow first responders and other participants of all ages in up to 50 cities.

According to Dave Statter of the NFFF, as the popularity of the climbs grew, the men looked for assistance in coordinating them. NFFF took over the organization of the climbs in 2011 and worked with the originators to implement the climbs as a way to support the families of 9/11 victims. Last year, the efforts raised $150,000 that was donated to the Fire Department of New York Counseling Services unit.

FDNY Commissioner Salvatore Cassano met with the group last year and informed them that not only were their efforts appreciated, but that the money raised from the climbs had saved counseling programs for survivors that had been slated for closure due to a lack of funds.

Also in 2011, while on a trip to the Big Apple to plan future climbs, five original members of the Memorial Stair Climb Committee and three newer members were inspired once again to lead by example.

At 6 a.m., the men met dressed in T-shirts, shorts, turnout boots and helmets in the narrow stairwell of a hotel next door to Ground Zero. Before most residents of the hotel even awakened, they had climbed up and down the building’s stairwells 6.5 times to replicate the 110 stories of the Twin Towers. All memorial stair climbs are the equivalent of 110 stories. 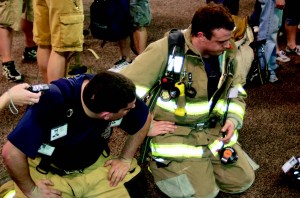 Firefighters who perform 9-11 Memorial Climbs in full gear challenge themselves to their physical limits. Still, many climb participants choose to add the extra weight out of respect and honor for those who donned it, and died in it, in New York City on Sept. 11, 2001.

In a reflection on the moment before the men began to climb that morning, Victor Stagnaro, director of fire service programs for the NFFF, wrote:

“Oren Bersagel-Briese stood on the rooftop of the Club Quarter’s World Trade Center Hotel in December of 2011, a few yards from where 343 of his fire service brothers had made the ultimate sacrifice 10 years before. He and the four other members of the 9-11 Memorial Stair Climb Committee — Scott Eckels, Brian Bush and Shawn Duncan from Colorado, and Josh Smith from Nashville — had just completed their own personal climb to honor the fallen heroes of 9/11. They had participated in climbs in Denver, Nashville, Indianapolis, Baltimore and Washington, D.C., but not in New York City.

“… As Bersagel-Briese and the others looked out over Ground Zero, he was confident that what he and his friends had started six years before was significant.

‘It really was everything that you would imagine it to be, including very emotional,’ said Bersagel-Briese. ‘I’m not sure that anyone said anything to anyone else in the stair well, mostly because there wasn’t a need to say anything at all. And then once we got to the top of the building for the last time, walked onto the roof, and looked down onto Ground Zero … wow.’”

FDNY Commissioner Salvatore Cassano met with the group afterward and informed them that not only were their efforts appreciated, but that the money raised from the climbs had saved counseling programs for survivors that had been slated for closure due to a lack of funds.

At FDIC this year, volunteers pinned the names of victim responders to their shirts or gear. Some sported one name but others, including several firefighters who were sweating and bent over in full gear, carried more than a half-dozen.

“It wasn’t until I really saw it that I did get it,” said Statter, of why firefighters feel compelled to perform a memorial climb. “Then, I remember in Nashville last year when the story was published on local television about the firefighters and who (one of them) was climbing for. The family saw the picture on his jacket and contacted him to say how surprised they were that somebody they didn’t even know was doing that for him.”