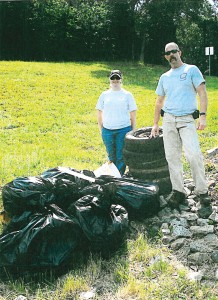 They do things in a big way in Texas, and the sprawling Western territory of cattle, cowhands and lone prairies now has another feather to stick in its 10-gallon hat. One of its municipalities, Sugarland, has snared top ranking as one of America’s cleanest cities — and other municipalities are using Sugarland as a model for their beautification plans.

According to Angela Castilleja, program director of Keep Texas Beautiful, her state originated a model that was taken over by Keep America Beautiful. KAB launched the Great American Cleanup nationally, and states across the country now participate.

“What we do is provide support to our affiliates across the state of Texas with all their recycling beautification cleanup programs. This year our Don’t Mess with Texas program celebrates its 27th year as the most prodigious anti-littering campaign ever,” Castilleja said.

Enter Asheboro, N.C.: one city whose envious eyes were on the sparkling clean Sugarland model, according to Brenda Ewadinger, executive director of Keep North Carolina Beautiful.

Ogburn Yates, a retired citizen in the city of Asheboro, invited Ewadinger to speak at a meeting of like-minded individuals to address possible solutions to litter in their community.

“I gave a presentation of how we could duplicate Sugarland’s success in Asheboro — an achievement which eventually was implemented by our entire state.”

The town’s cleanup was initiated by and continued by Mayor David Jarrell.

“We had lots of volunteers, and we participate in the statewide Big Sweep on a yearly basis, conduct a local Lake Lift and have mayor’s cleanup days,” said City Manager John Ogburn. “Those initiatives are directed at litter prevention and education as well as community cleanup.”

The cost of the endeavor was less than $2,000 annually. Ogburn said the city is “very happy” with the results. The cleanup will kick off again this spring and take place from March 1 through May 31.

“These are positive events for Asheboro. These cleanup days enhance our community and create a sense of community spirit and volunteering,” he noted.

Becoming a certified affiliate of KAB is a first step for municipalities struggling with litter issues, said Ewadinger. She points to a three-page KAB Litter Index as one way that cities can then measure their progress.

Some other ways in which any area can be motivated to participate include having a “Most Unusual Litter” contest in which cash prizes are awarded twice yearly to individuals or groups who collect bizarre pieces of litter during community clean-up drives.

“The North Carolina Swat-a-Litterbug endeavor is also working; that’s where a citizen sees someone littering or trash blowing from a vehicle and reports them,” said Ewadinger. These citizens are encouraged to get the license plate number (and report) the type of littering offense, date, time and location.”

“We also have an annual Tarp Day in which kncb affiliates work with local law enforcement agencies and solid waste personnel to distribute free tarps and litter prevention brochures at landfills and recycling centers. Our goal is to reduce accidents from unsecured loads and roadside litter while simultaneously teaching them the littering laws of our state.”

kncb is a 501(c)(3) which accepts tax-deductible monetary donations.