With 2013 looming, cities are looking into the future for the potential to create growth. The Municipal asked mayors of three very different cities to describe their outlooks for their cities under their leadership, and discovered cities that work internationally are feeling more cautious than cities who thrive inside their own boundaries.

Mayor Kurt Dykstra, of Holland, Mich., said one out of every five products produced in the Holland area is exported internationally.

“With that level of export activity, Euro-zone economic troubles and (the) Asian slowdown directly impacts our local economy,” he explained. While the U.S. and Holland, Mich., are holding their own, the economy of other countries, specifically European nations, is a major concern.

“Our companies are in a much better position than what they were a couple of years ago,” Dykstra noted. “However, there is still much caution and concern over both politics and world affairs, so that is causing companies to act conservatively.”

For example, in late October, Holland’s Gentex Corporation posted a low quarterly profit. According to the company, sales had slowed because of the economic confusion in Europe, its biggest market.

In 2011, European nations accounted for about 45 percent of Gentex’s sales.

Cities that trade with non-Eurasian nations don’t appear to be experiencing the same problem. The city of Racine, Wis., recently began a number of trade missions with countries in South America. Because international trade is fairly new to businesses in Racine, city officials looked for partners who didn’t appear to be struggling to begin their international ventures.

“We’re not going to let anyone else’s problems stop us,” John Dickert, mayor of Racine, said.

The city’s government is expressing concern over a different topic. Rather than worrying about the international economy, they’re focused on transportation.

The city of Gladstone, Mo., is undergoing some construction projects this year. Unlike cities that do business internationally, Gladstone has been able to keep much of its revenue inside the city. The photo shows construction on a new town and civic center that began in early November. (Photo provided)

“We’ve got a highway system that’s congested,” Dickert said. “We need to expand our bus system and bring in rails.”

Located about 60 miles north of Chicago, Racine is considered to be on the edge of the Chicago-land “megatropolis.” But it does not have a transportation system near equal to that of Chicago. The average commuter in the area spends around $700 per year waiting in traffic.

“Chicago has a great transportation system in the city,” he said. “We’re looking to expand that same methodology in this whole area.”

Dickert believes that improving transportation systems in the area will provide the best possible growth for Racine and encourage the exchange of Chicago-land people, as well as products.

For Gladstone, Mo., keeping city residents happy is what will mean a better outlook for the municipality as a whole. City officials made a concerted effort during the recession to improve their own city, rather than worry about outside affairs.

“In fact,” Carol Suter, mayor of Gladstone, said, “we have been able to take advantage of the low cost of credit and lower costs of construction during the economic slowdown.” 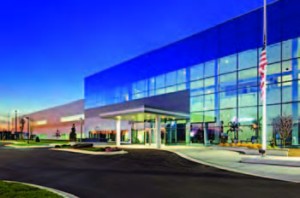 Cities with businesses that rely on international trade are finding the economic troubles in Europe troubling. In 2005, the Haworth Corporation of Holland, Mich., began a massive remodeling project, shown here. However, within the past two years, economic struggles in Europe have caused concern for the furniture manufacturing company and forced it to close two facilities. (Photo provided)

Currently, Gladstone is working on a new town and civic center. New offices and restaurants are also under construction.

“We are seeing new activity in economic development, as developers have started to plan for new projects again,” Suter said. However, much of the profit for Gladstone comes back to sales.

Unlike the larger cities of Holland and Racine, Gladstone doesn’t rely near as heavily on national and international trade. Rather, most of its businesses collect their profits from local consumers. The evidence of progress, for them, lies within the city limits as home sales improve, developers make plans for new projects and citizens buy more goods.

“Sales revenues have been increasing, so residents have been buying more,” she said. “That’s a good sign that folks are doing better these days.”

While it appears all three municipalities know their own strengths, those with locally- focused sales are a more confident about 2013 than those who rely on international economies. Small and medium-sized cities that work with major metropolises will likely be able to experience more growth in 2013 than those that deal with struggling European nations.