By MARGUERITE DUFFY AND MICHELLE SOKOL
The Municipal

County courthouses are the foundation of a community. They provide order in the midst of development and lay down the law of the land.

Their place of honor as one of the first municipal buildings to go up in a town puts these historic structures at risk today. Many have deteriorated to the point that the easiest solution is to demolish the existing building and start fresh at another location. Administrators in Todd County, Minn., and Genesee County, Mich., though, not only saw the long-term benefits of renovation — namely, preservation for future generations — but figured out how to make it cost-effective as well. If done right, even the environment can benefit from an investment. 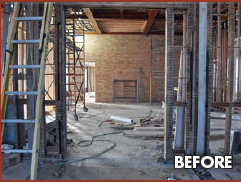 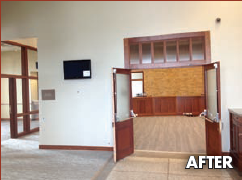 Major construction was needed to renovate the entrance to the Todd County Courthouse boardroom, which used to be the courtroom. The photo on the bottom shows the finished conference rooms and the board desk, seen through the open doors. The cabinets on the far right were original fixtures in the building. Renovations are expected to be completed by summer 2012.

The Todd County Courthouse was built in 1883. By 2010 it faced an uncertain fate: officials were debating between an expensive renovation or demolition. After conducting a study on the structural integrity of the building and its potential capacity, a board of commissioners opted for renovation and asked for voter approval.

Perhaps because of a push by the Preservation Alliance of Minnesota to recognize the courthouse as a historical site in danger, voters vindicated the decision to renovate.

“It seems to me that there is a history in this county of preserving historic buildings as well,” Todd County Courthouse Administrator Nathan Burkett said. Three have been renovated in the past 10 years and another one will likely be renovated during the next two years.

Bonds were sold in the amount of $4.3 million and construction started on the courthouse. Because the building’s exterior was on the historic registry, only the inside was renovated. It was gutted and replaced with new equipment, which allowed for a venture into energy efficiency.

The board opted for a geothermal heating system at a cost of about $120,000 more than a standard heating and cooling system. Geothermal, while more expensive at the outset, results in lower energy costs long-term. Because the courthouse is made of brick, which is very efficient in maintaining a good ambient temperature, the building’s energy costs stood to decrease even further after the system’s installation. Burkett predicted around a 10-year payback period on the investment.

In addition to the geothermal system the courthouse boasts historically accurate and highly efficient windows paid for by a grant from the Minnesota Historical Society.

Some aspects of the original interior remained the same for the sake of preservation. Several brick walls were exposed, including an original, arched entryway to the building. Additionally, a cross-weave beam in the county boardroom was exposed and preserved.

Overall, Burkett said he is proud the project was completed and is especially happy that original design elements were incorporated. He feels that county services are now more efficient, both in regard to energy and to customers.

“I think our long-term impacts in terms of our ability to serve the public have been underestimated to this point, and I am excited to see what the future brings,” he said. 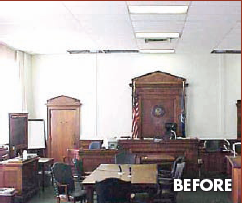 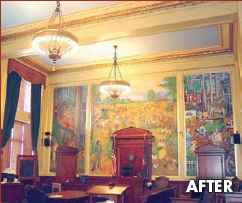 Before and after photos of the renovations to Courtroom 1 in Genesee County, Mich., in 2003 illustrate a stark difference. Restorations designed to bring the courtroom back to its original grandeur included the removal of suspended ceilings to replace fluorescent lighting with 1926-style light fixtures, re-creating murals from a black-and-white photo in the Flint Journal and replacement of a window treatment. (Photos provided)

Genesee County’s Courthouse has been a center of justice since 1838. Five courthouses have stood on the same location, with the current one being built in 1926.

The building’s renovation in 2003 was part of a larger, $25 million town improvement project. While the Genesee County Board of Commissioners appropriated most of the funding, the Genesee County Bar Foundation, in addition to a number of private foundations in the legal community, was also supportive.

A renovation had been in the works for several years because of a need to accommodate current demands on the space. The Board of Commissioners placed special emphasis, however, on preserving the original design and structure of the building.

There were two 1926 murals in the courtrooms at the time of renovation. Both were integrated into restored rooms. It was discovered that a third had been removed during a renovation in the 1960s. Because the board wanted to return the courthouse to its original look, an artist was commissioned to repaint the third mural using a black-and-white photo of the original.

“After a somewhat lengthy investigation, it was determined that the original muralist for all was Edgar Spier Cameron,” Menear said. “He was an illustrator for the Chicago Tribune, in addition to a muralist and painter.”

In addition to preserving the original building as much as possible, energy efficient upgrades were also a priority. New windows had been installed during a partial renovation preceding the 2003 one, and after an energy audit and upgrade, compact fluorescent lightbulbs and light sensors were added to save energy both when the rooms are occupied and when they are vacant. The original 1925/1926 steam boilers were replaced also, converted to hot water boilers.

“I am most proud of the historical restoration of the original courtrooms,” Menear said. “Great care was given to historical accuracy and functionality. Many courtrooms still have the original furniture, which was also restored.”

While Genesee County was more concerned with returning the courthouse to its original condition, and Todd County aimed to preserve the facility for future generations with energy-efficient upgrades, both buildings are now a source of pride for their respective counties. Millions were appropriated in each case, but the funds were definitely a “money well spent” investment in the future. 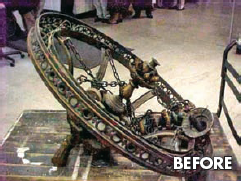 Moldings were cast from three 1926 light fixtures found in the building. These photos are of the successful restoration. 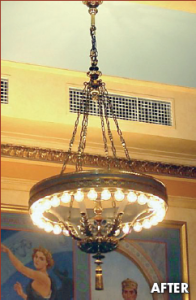