As of October 25, the total number of gun violence deaths in the U.S. this year alone is a staggering 31,885 with 342 from mass shootings. These numbers would be unbelievable if we weren’t seeing it play out nearly daily in the news.

The Municipal wanted to check how some communities were dealing with gun violence and examine some tools that may help.

In the early morning of Aug. 4, 2019, Connor Stephen Betts shot and killed nine innocent people and injured 27 within seconds. Dayton Director and Chief of Police Richard Biehl reported that the first shot rang out at 1:05:35 a.m. and Betts was brought down by officers in the area at 1:06:07 a.m.

Had there not been police officers nearby that death toll surely would have been significantly higher. According to Biehl, the 30 second response time was probably unprecedented. He added, “I haven’t heard of any other tragedy being dealt with so quickly.” 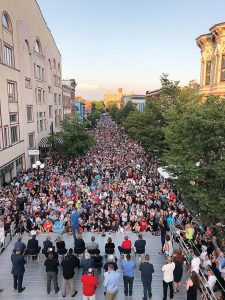 Thousands gathered in Dayton, Ohio’s, Oregon District for a vigil after the mass shooting Aug. 4. At the end of the month, Dave Chappelle gave a benefit concert for the residents of Dayton. (Photo provided)

Generally speaking, there are officers staged nearby in a central location to that busy Oregon District neighborhood as closing time for the bars and clubs nears. Biehl said the Federal Bureau of Investigation is still investigating the shooting, including the motive and mindset of the shooter.

Part of that investigation is trying to determine if the date had any bearing. “Is there something specific about Aug. 4? Why did he choose that date?”

Biehl said from the start that they didn’t see it as a hate crime. “Everyone wants to know why and I understand — but it’s probably not very productive at this point.”

Any information from the investigation would likely be made public, not only to the local residents but also to the general public, with Biehl noting, “We know it struck a chord nationwide.”

When asked how the city was healing Deputy City Manager Joseph “Joe” Parlette said one thing that helped was what he described as a “pop-up concert of 30,000 people” put on by Ohio resident Dave Chapelle.

“It was incredibly inspiring and a much needed therapeutic concert,” Parlette said. “Just the feeling and the vibe and the obvious emotion and healing that proved to be very helpful to the entire community.”

Biehl noted, “The process is far from being complete. Internally and externally, we’re in a state of recovery and trying to maintain a balance — some semblance of normalcy — as we figure out what does normal even look like after this.”

He added not only the police but all emergency services and public safety employees in Dayton have been affected by the “extraordinary in magnitude” crises they’ve had to deal with in a short period of time. Aside from the shooting, there was a large white supremacist rally in the city followed by an EF3 tornado.

“Most public safety agencies never have to deal with one of these,” Biehl said. “We’ve had to deal with no less than three in as many months.”

The entire police department was mobilized for the Honorable Sacred Knights — a Ku Klux Klan affiliate — rally and its surrounding venues. He said later it was discovered that Betts attended that rally, protesting the white supremacists. “One can only imagine what could have happened with that crowd density of hundreds with that kind of weaponry.”

Biehl believes the sheer presence of the officers played a role in creating a buffer between the two groups with radically differing views. He said the only time he’s seen that level of crowd and police presence in his 40-year career was when he was involved in a 2001 civic unrest protest in Cincinnati. The HSK rally cost Dayton approximately $700,000.

During preparations for the rally, the chief said officers were telling themselves they’d “be able to take a deep breath and relax on the (May) 26th and then the 27th happened.”

The EF3 tornado that tore through the Dayton area also had the city’s public safety and emergency services departments working with little sleep. Personnel were barely recovered from these events when a little over two months later the mass shooting occurred.

“In my 40-year view of policing, this is unprecedented,” he said.

“The mayor (Nan Whaley) has been very clear she absolutely supports what the governor’s proposing but also that it doesn’t go far enough,” Biehl said.

The focus has shifted somewhat to a “pink slip” system, which allows the police to pick up someone and take them to a hospital for an emergency psychiatric hold, whether they want to go or not, if they’re deemed a risk to themselves or to public safety. If the legislation goes through, it may give them a window of opportunity to seize weapons and allow for a hearing to be held within three days for the owner to recover his or her weapons.

Biehl said he “absolutely supports the strategy, but it has limitations.” 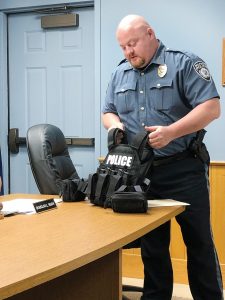 One limitation is the vast majority of people with mental health issues are not violent, so it would be warranted for a narrow segment of the population, and only a small percentage of those pink slipped and taken to a hospital had a prior arrest.

Biehl related a situation awhile back where they pink slipped someone and brought them to the hospital. The hospital kept the person for three to four hours, and when released, the person murdered three people.

As for when the governor’s proposals might take effect, he said it has to pass the House of Representatives and the Senate where unfortunately gridlock on this topic is common.

When debates occur about banning automatic weapons, there are nuances to be considered. Biehl said the weapon Betts used was sold as a pistol and was built out to function like an AR-15 rifle. He added magazine capacity has to be considered aside from the type of weapon. Betts shot 47 rounds out of a 100 round magazine. They recovered 39 casings but know he was able to shoot 39-47 rounds in 24 seconds — that’s shooting two people per second, six lives in 2-3 seconds.

“That matters.” He also noted, “Two of our officers did magazine change-outs.”

He commented that unfortunately a lot of weapons conversations are polarizing people.

Biehl talked about visiting Dayton’s sister city, Augsburg, Germany, where he asked about its gun crime. There was a pause and some confusion, and then the Augsburg representatives replied they didn’t have gun crime and all their guns are registered.

“Why is it other western industrial nations are able to escape (this) and we haven’t?”

As for any changes the department made after the shooting, Biehl said they’ve done an assessment of equipment that’s crucial for them to have when faced with any crisis and realized having enough tourniquets and medical supplies was crucial.

“Clearly there are things we want to examine, not just from this (shooting) but also the tornado and any other mass event,” Biehl said.

Dayton also had a mass casualty crash two weeks later with 11 critically injured and a horrific scene. Parlette said a lot of the same first responders who responded to the shooting also responded to the crash. He asked Biehl to talk about the resilience training.

Given all the tragedies this year, Biehl said the department is currently in conversation with Rice State University on how to cultivate resilience in police officers and public safety personnel. “We see things that other people never see and that can rock you to your core.”

Even in a small Midwestern town with a population of about 1,500, the police chief wants his people to be prepared for a potential mass shooting. The Milford, Ind., Police Department has 14 on the force — five full-time, three part-time and six reserve officers. In September, all officers for the first time received an active shooter kit to wear.

Police Chief Derek Kreider said, “The opportunity arose with the funding being there, and with the climate being as it is with the rise in the country of shootings, I wanted our people to be prepared with the proper equipment if a situation should occur.”

He admitted gun crime is not a big issue in his community; however, “It can happen anywhere. I want to give our people the best equipment to deal with a situation if it should happen. To me, that’s important.”

There are several gun detection systems on the market now. One system by Athena Security detects a gun when it is brandished. Lisa Falzone co-founded the company with Christopher Ciaberra in 2017 after the Douglas Stoneman High School shooting.

“I kept hearing about all these mass shootings, and I wanted to create something to help,” Falzone said. 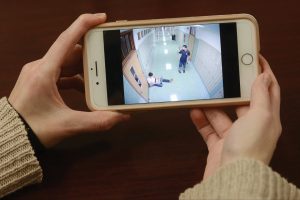 This photo shows the Athena Security app streaming an active shooter situation in real time. With the Athena system, once the alert is sent to the phone, customers are able to access real-time video via the CCTV cameras. (Photo provided)

The system works with current closed circuit cameras as long as they’re not analog; any cameras installed in the last five to 10 years should work if they’re IP based. Falzone said when someone draws a gun, within 3 seconds it sounds a text alert to the police or whomever the client is.

The system often gets confused with gunshot detection systems, but she said, “Our system alerts before a shot is fired.”

Athena Security has some Fortune 500 companies, cities, religious institutions and schools as clients. “Anyone concerned about gun violence is a potential client,” she said.

Unlike some gun detection technologies that alert on anyone carrying a weapon, Athena only alerts when that gun is brandished, and once there is an alert, they’re connected in real time to see what is happening.

Biehl shared his concern with some detection methods. “The challenge with gun detection is how to apply it broadly and that it can give false positives.”

Parlette mentioned the HSK rally and what they saw on video. Biehl added there were at least 75 guns among the crowd.

Biehl said, “We are a concealed and open carry state, so how do you factor in the law?” 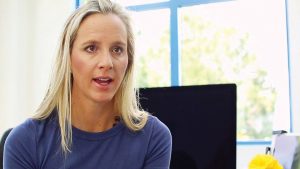 Ohio’s state legislature allows even more latitude in guns being prevalent in the environment and also has a preemptive law that prevents the passage of any municipal laws that are more stringent than the state.

“In other words, we can’t say in our city it’s unwise to carry guns in certain environments or certain venues,” he said.

He conceded the gun detection technology may have a place in some venues where crowd density is an issue but wasn’t sure how it could be applied broadly within the law.

Still, for some cities and venues, gun detection might be a solid pursuit.

Falzone said even small communities with a limited budget could afford to install the Athena system. She said it typically cost $100 a month per camera. “Versus the cost of a human monitoring a camera, it’s a lot less expensive.” And a city could choose how many cameras to install the system in — there’s no minimum required.

Kreider said Milford’s police department is currently using an app called Hero911 that alerts when an active shooter is in the area and informs them what officers are responding.

One thing all agreed on was some action needs to be taken.

Falzone said, “We’ve got to do everything we can — even if we have political gun reform, this is still going to be a problem.”

“We train for the most dangerous situations, but we are glad to go our entire career without having to use it,” Kreider said. “But we have to be prepared.”

Biehl said, “Whatever your opinions are on this perspective, you need to engage in conversation. Put your strong ideologies aside and open up to hear other’s views. At the end of the debate, come up with reasoned and effective policies. To not have that conversation and get stuck in your views prevents anything from happening.”

NEXT: Cities continue to cope with gun violence