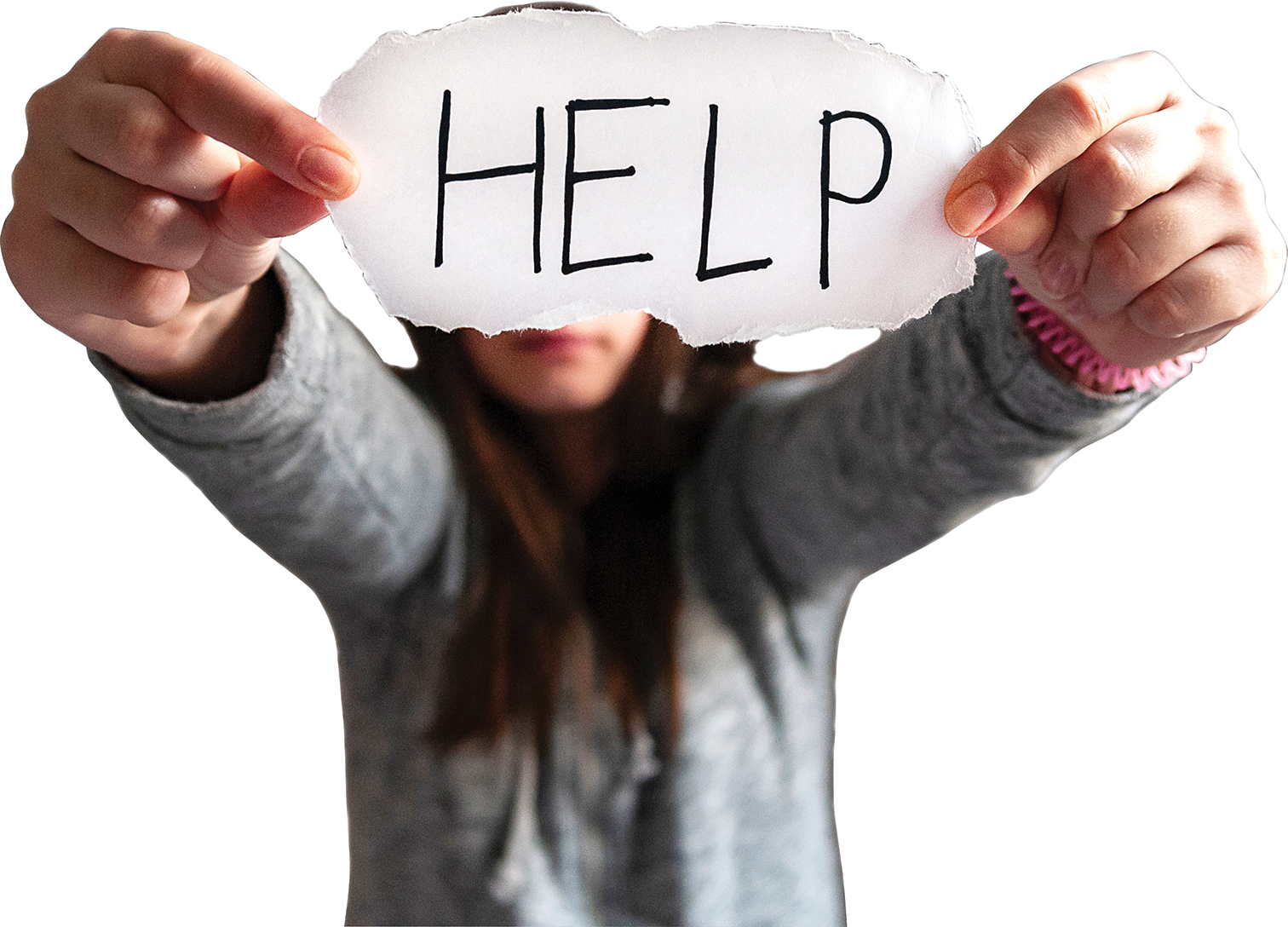 When disaster hits a community and an SOS call goes out, generally the problem is not a lack of response but rather an overwhelming response of volunteers and donations. For mayors and other city officials trying to put their communities back together again, it can create a different set of problems.

According to Brett Kriger, deputy director of disaster recovery for the Louisiana Municipal Association, “Donations are one of the biggest problems when a major disaster gets attention all over the country with all the individuals and corporations who want to help. It was a major concern during Hurricane Andrew.”

Kriger said the resources that pour into a disaster area come in three forms: people, money and “stuff” from fellow Americans who knowing that people lost belongings want to send replacements.

“Hopefully from the time the truckload leaves you know what’s on it, have a place to park it, security for it and can get it unloaded and sorted,” Kriger said.

In Louisiana it starts at the state’s border with a check-in at the way station where the truck will stay if officials don’t know what’s in it. On the other hand, at the municipal level, residents need stuff but things work out best when officials make known what is needed. 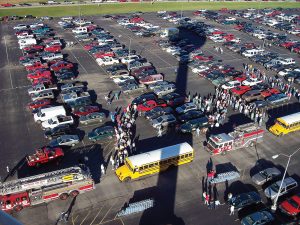 This aerial photo shows the lines of school buses at Northwood High School in Nappanee, filling up with volunteers to go out and pick up debris after an EF3 tornado struck the city and its surrounding countryside. Each school bus was escorted by an emergency vehicle. (Photo provided by Nappanee Fire Department)

When goods are received as donations, Kriger said, “You’ve basically become a Walmart so how are you going to set up this retail operation? Are you going to limit hours? Who is going to provide security?”

Sometimes the items received are valuable, and during Hurricane Andrew, a truckload of canned shrimp disappeared. He said mayors need to determine where goods that can’t be used will go and ensure that everything is recorded so people and organizations can be thanked.

In one situation, a corporation wanted to send three truckloads of goods, and Kriger told it the ongoing recovery efforts really needed money. The officials at the corporation sent money but explained it was important for its employees to be able to go to the store, select something and load it into trucks for photos. Kriger understood and recovery officials also took photos when the goods were received.

“It created tremendous goodwill for everyone — anything you can do to create goodwill during a disaster is a good thing,” he said.

He advised that mayors be aware of nearby charitable organizations and the resources they may be able to provide. He said there should be memorandums of understanding ahead of time with such organizations. City officials need to be prepared to be self-sufficient for 72 hours before the Federal Emergency Management Agency and other aid organizations arrive. Residents will need to be fed and have a place to stay, which can be difficult because victims need those hotel rooms.

He said more important than having a plan is knowing what the plan is and practicing the plan and tracking everything in order to be reimbursed by FEMA.

Over the course of this two-part series, three cities that know the benefits of planning and utilizing resources will be highlighted. Through their efforts, Nappanee, Ind.; Dardanelle, Ark.; and Denham Springs, La., managed to weather the disasters that struck them and come out stronger on the other side. The Municipal will be starting the series with Nappanee.

A community pulls together

Former Mayor Larry Thompson recalled storm watch volunteers were in place “as they had been many times, and when the actual event was a few miles away, we engaged the tornado warning system — the first time in 11 years we engaged it for an actual event.”

Between the city’s warning system and local meteorologists warnings, despite the devastation, there were no fatalities and only minor injuries. Several years prior to that event, city officials had developed an emergency management plan and part of the plan was tornado preparation, with Thompson commenting, “Everybody followed the plan.” 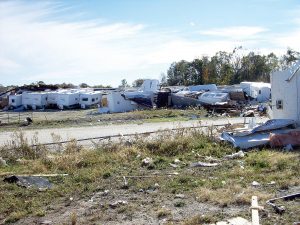 These trailers from a Nappanee, Ind., recreational vehicle company were picked up and thrown all over after a tornado hit the city’s east side in October 2007. (Photo provided by Nappanee Fire Department)

Leaders of every department in the city were all in the command center, which was at the time the 911 dispatch center, so the city had total control of communications.

“Surrounding cities were not affected so we were able to pretty quickly engage our mutual aid agreements,” he said, adding that they had about 25 ambulances at Nappanee’s service but only transported one person to the hospital.

“We had to go check and double check, and at daylight, we checked again to make sure we didn’t miss anyone in homes and businesses,” Thompson said.

The emergency services staged at the middle school and spread out to seven areas to do that checking. The next morning was a Friday and officials discovered the tornado was 20 miles long, and aside from three sections of the city that were hit, a lot of farms and Amish properties were affected. Thompson shared the governor called and said he wanted to come but his daughter was getting married, and Thompson told him he didn’t need politics, he needed help. That help arrived via an army of state highway manpower and equipment parked at his family’s funeral home business.

“We had so many people calling wanting to help so we made Sunday volunteer day,” he said.

Nappanee is a pretty church-based community, but several pastors told him they were canceling services and instead encouraging their congregations to volunteer. Traffic was backed up for over 10 miles that day from people showing up. Thompson said they used the high school parking lot, where school superintendents, pastors and city employees organized the volunteers. They utilized every school bus, and each filled bus was escorted by a police car, fire truck or ambulance to designated areas.

One company donated thousands of garbage bags and another semi load of water bottles. They estimated about 3,000 volunteers showed up. Additionally, other volunteers came with chain saws and log splitters, but city officials didn’t want to assume responsibility for them so they filtered out on their own.

“At the end of the day Sunday, a lot of debris was picked up and a lot of wood cut. We had victims and volunteers going through cornfields because that corn needed to be combined,” he said, noting local landfill waived fees to accept storm debris.

The key to getting that kind of help, according to Thompson, is that city officials can’t plan it for two weeks later.

“You’ve got to get ahead of the game when they’re passionate about helping and accommodate the helpers.” He added, “When you roll up to a homeowner’s place and see them crying and trying to clean up themselves — you want to help.” If efforts had been slower, officials probably wouldn’t have received the massive turnout that they had.

Nappanee was denied aid from FEMA twice. It was told it “didn’t meet the threshold” since a school, hospital or government center wasn’t hit and a large percentage of the property owners had insurance. Still, he said former clerk-treasurer Kim Ingle “was a genius behind this — every type of equipment was documented. Her record keeping was second to none.”

The former mayor said officials wanted to offer the same type of assistance to their Amish neighbors who at first declined because they had a disaster relief fund, but it had been seriously depleted so they finally came to terms and accepted two donations from the city.

Nappanee set up a committee named the Northern Indiana Tornado Recovery Operation — or NITRO — to handle donations and claims. 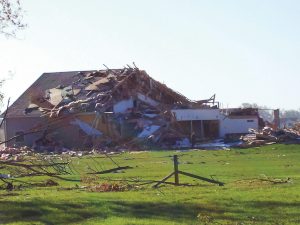 This is just one of many homes damaged by the EF3 tornado that struck Nappanee after 10 p.m. on a Thursday night in October 2007. (Photo provided by Nappanee Fire Department)

“Once the word went out that no FEMA funds were coming, donations started coming in,” Thompson said.

The committee ran the funds through a special account set up at the Elkhart County Community Foundation, which acted as its bank. The former library director, Linda Yoder, was named chairperson, and the committee consisted of a social worker, the clerk-treasurer, pastors and three people hired to do case reports. The committee decided who got what and how much recipients received based on insurance and immediate losses. So if a car was totaled, its owner probably got funds for a new car; if someone lost all their belongings, they got money for clothes. Donated items went through the charitable organizations Family Christian Development Center and Open Door.

NITRO was not in the city’s original emergency management plan, but officials soon realized they had to have a process and it was set up within five days and was active for nearly a year. The city did get some disaster relief from the state, which helped cover the city’s uninsured losses. The street department garage was wiped out, along with all the tools.

Thompson said the last official act of NITRO was to disburse left over funds and it did so by adding tornado warning systems in the rural areas — even one 20 miles away in the town of Bourbon where the tornado first touched down. The rest was split between the Red Cross and the Salvation Army, both of which had been helpful during the disaster.

Thompson said, “The best thing I did was bring the best people to the table.”

Current Mayor Phil Jenkins was on the board of public works and safety at the time. He hopes he never has to deal with such an emergency but said he’d likely do something similar to a NITRO committee if the need arose. When asked how often officials review their emergency management plan, he admitted, “Probably not as often as we should,” though he added, “We do discuss it in our weekly public safety meetings.”

Nappanee is going through a comprehensive review of the plan right now to ensure it has “the most accurate up-to-date information at our fingertips,” according to Jenkins.

“In the event of an emergency, I think this area of northern Indiana — between the mayors and departments — rallies behind each other. I’m confident we’d have the support and we would provide the support,” Jenkins said. “This Hoosier willingness to help each other out is our best asset in times of disaster — as well as our Elkhart County Emergency Management team and director Jennifer Tobey.”

Join us next month for Part II of this series where Denise Fedorow spotlights the experiences of Dardanelle, Ark., and Denham Springs, La., during their times of crisis. We will also share how all three featured communities started the emotional healing following their respective disasters.