Base Station: The Mount Washington Cog Railway Base Station has accommodated the boarding and debarkation of more than 5 million riders since the first passengers ascended the mountain in 1868.

It is the rare and special dreamer who can scan the choppy waters of a mile-long strait in San Francisco and say, “We can build a bridge over that.”

Or to peer at a mountain range and envision an asphalt ribbon taking millions of travelers over, through and around those formidable obstacles.

Sylvester Marsh was that kind of dreamer. In 1852, while scaling Mount Washington, the highest peak in the northeast United States, he committed himself to building a railway to ascend the 6,288-foot mountain.

His idea, like so many other inventive breakthroughs in engineering, was met with derision. But elbowing through the wall of ridicule and castigation, Marsh invested $5,000 of his own money to build what P.T. Barnum would later dub “the second greatest show on earth.” 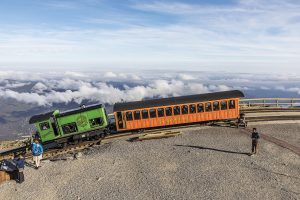 Summit:
Trains reach the 6,288-foot summit of Mount Washington about an hour after they depart the base station 3 miles away.

On June 25, 1858, Marsh, a retired businessman, obtained a charter for the path that replicated the mountain trail established by Ethan Allen Crawford, but the American Civil War intervened to scuttle any progress until May 1866, when Marsh developed a prototype locomotive with a short section of demonstration track to court investors.

The first paying customers boarded the original boiler train on Aug. 14, 1868, and more than 5 million passengers have followed their lead since then.

The 3-mile-long Mount Washington Cog Railway was the first of its kind built anywhere on the globe and ranks today as the second steepest railway in the world, with an average grade of more than 25% and maximum grade of 37.4%.

The cogs under the chassis of the trains — the present fleet consists of eight biodiesel and two steam engines — operate similar to bicycle sprockets and lock between the rungs of the “ladder” situated between the rails of the narrow gauge track to prevent slippage as the train propels forward. One 70-rider car is attached to each engine, and the passenger cars are often booked to capacity with reservations days ahead of departure.

At the summit, passengers can linger for an hour, visiting the Sherman Adams Visitor Center’s museum, post office and snack bar; and enjoying the breathtaking 360-degree vista of five surrounding states, Canada and the Atlantic Ocean.

The ascent and descent each take about an hour and are accompanied by narration about the history of the railway and features of the surrounding countryside. 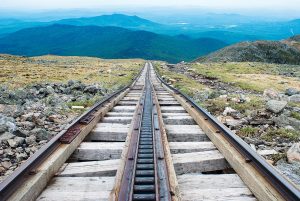 Rails:
The mechanical structure of the cog railway ensures the train does not slip backward during its ascent or lurch forward on the way back down the mountain.

The railway’s current owners have made major enhancements to the enterprise in the past 20 years, including new switches, a passing loop and air ride coaches, according to Wayne Presby, president of the Mount Washington Railway Company. Projects in the near future include replacing all the steel rail; building an 18,000-square-foot maintenance facility; and restarting winter operations to transport hikers, snowshoers and skiers.

According to www.thecog.com, riders are encouraged to arrive well ahead of departure time “for ticketing and restroom visits. There are no restrooms on the trains, but there are at the base station and the summit. We only hold reservations until 15 minutes before departure.”

One-way tickets are not available for those who want to climb the mountain and ride back. “There is no guarantee a train will make it to the summit,” says the website. “Inclement weather can happen at any time and occurs frequently. Always be prepared to hike back down just in case.”

Peak periods include the Fourth of July and Labor Day holidays and late September through late October. 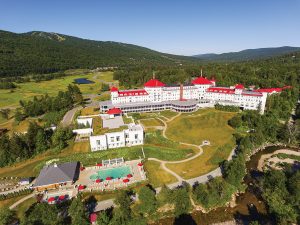 Hotel:
The Mount Washington Hotel was the site of an international conference in 1944 that established the World Bank and International Monetary Fund.

The railway is the signal attraction of Bretton Woods, an unincorporated area of indeterminate population within the town of Carroll, N.H. The area is surrounded by the White Mountain National Forest and is home to the iconic Mount Washington Hotel, the site of the 1944 United Nations Monetary and Financial Conference, which led to the establishment the following year of the World Bank and the International Monetary Fund.

The area took its name from Bretton Hall, a country house granted to Sir Thomas Wentworth by King George III in 1772. The hall and 82 other buildings, accompanied by 24,640 acres of land, served as a plantation, which later became the town of Carroll.

The Bretton Woods Mountain Resort ski area, located in nearby Bethlehem, is the largest in the state, boasting 101 trails.

NEXT: Texas applies lessons from Harvey toward recovery and flood mitigation planning