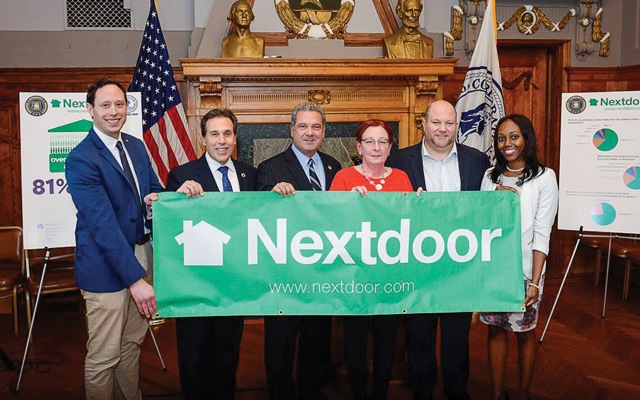 As social media continues to be more prevalent in society, municipalities are finding new ways to utilize it to engage with the public.

Most people are familiar with Facebook, Twitter and Instagram but Next Door is a social media platform specific to neighborhoods and the people who reside in them. Yonkers, N.Y., Police Department partnered with Next Door in 2017. Public Information Officer Det. Sgt. Dean Politopoulos said the police department has multiple resources to engage with the community.

The department has a community affairs unit that enables officers to meet with residents one-on-one or in group settings. The department also utilizes social media — Facebook, Twitter and Instagram.

“Most recently we saw that Next Door was in Yonkers, and we wanted to get involved in order to increase our social media presence and interaction with citizens,” he said.

According to Politopoulos, Next Door is unique compared to other social media sites because it makes an effort to verify residency and only allows members who live in that community to join. Yonkers, a city in Westchester County just north of the New York City boroughs, has several Next Door neighborhoods, and the verification is done by mailing postcards to the potential member’s homes.

“So, if you don’t live there you wouldn’t be able to join,” Politopoulos said.

That level of verification offers several benefits to the police department: knowing that it’s talking to residents of that neighborhood for one, and it also localizes issues to specific neighborhoods. When it comes to crime reporting, he said people are more proactive about reporting suspicious activity and people are sharing more of the things happening in their neighborhoods.

“For example, someone might post ‘Why was that helicopter flying over Central Avenue?’” he said, noting neighbors will respond. He can also respond with accurate information when possible. “So it’s much more localized. The information we see is very unique to the neighborhoods.”

He added the police department is able to use that information as “localized intelligence specific to neighborhoods — it’s good for us because it’s street-level intelligence.”

Benefits for residents, according to Politopoulos, is that they get much better police service. “We’re interacting with them all the time and can address any concerns.”

He said it also helps residents feel that they can be a part of improving the quality of life in their neighborhoods and not “just be a bystander. It puts some skin in the game. Not every complaint can be addressed, but we try to help as best as we can.”