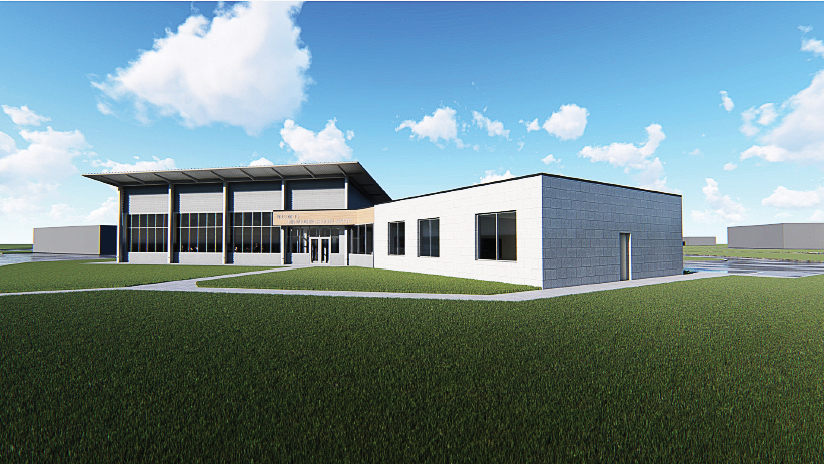 Pictured is a rendering of the new terminal, which will have a larger pilot’s lounge with 24-hour access, a separate passenger lounge and a conference room, which will be shared with the Air Force. (Photo provided)

When a plane lands at the Enid Woodring Regional Airport in Enid, Okla., director Dan Ohnesorge wants passengers to know that they have arrived.

“The airport terminal is the first thing people see when they get here and the last thing they see when they leave, so it is important that it makes a good impression,” he said.

Dedicated in 1928, Enid was the first city in Oklahoma to have a municipally funded airport. The facility was made possible with a $50,000 bond as well as 80 acres of land donated by a private citizen and backed by the American Legion. It was named for Lt. Irvin A. (Bert) Woodring, one of the U.S. Army Air Corps’ “Three Musketeers of Aviation” in 1933 and is located 4 miles from downtown Enid. Its services include the Barnstormers Restaurant, numerous hangar facilities, maintenance facilities, Federal Aviation Administration repair stations, a flight school, air taxi and aircraft rental.

This rendering shows the entrance from the parking lot. (Photo provided)

Over the past several years, the airport has made approximately $13 million in infrastructure repairs and upgrades, but last year the city approved the airport’s most ambitious project to date: the construction of a new terminal that is scheduled to be finished in mid-June with a ribbon cutting soon to follow.

“The Air Force uses our airport for a several of their missions and a portion of the new terminal will include a meeting room where they can plan their flights, brief and debrief their personnel,” Ohnesorge said.

A bit of turbulence

Despite a generous donation and a healthy budget with which to complete the development, the journey to the new terminal was not without a bit of turbulence. When the project was first advertised in early 2018, the bids they received were higher than anticipated. CEC Engineers and GH2 Architects went back to the drawing board — so to speak — and reexamined the plans then made some adjustments that would cut costs while still giving the city the new terminal it needed. RSM Development in Edmond, Okla., was eventually awarded the contract and ground broke on the new terminal in September of last year.

“Since then, it has moved along pretty well,” Ohnesorge said.

The new terminal will be a 7,300-square-foot space and will have a better layout than the previous one. As engineers studied the existing terminal, it was determined that there was a lot of wasted space that could be better utilized. In addition to the new conference space that will be shared with the Air Force, the new terminal will have a larger and more comfortable pilot’s lounge with 24-hour access as well as a separate passenger lounge for those waiting on flights.

“At the current moment, they have to sit in the restaurant and that’s really not the best solution, so we thought a lounge was necessary. There will also be 24-hour access to the lobby as well as restrooms for those who have airport business as well as upgrades to the kitchen in the restaurant to modernize it,” Ohnesorge said. 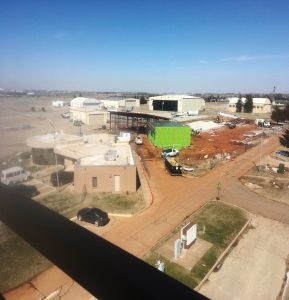 Pictured is construction work on the new terminal. (Photo provided) 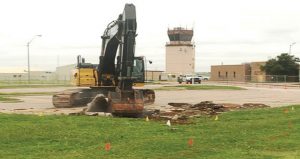 Ground was broken for the new terminal in September of last year, and work is expected to be concluded in mid-June. (Photo provided) 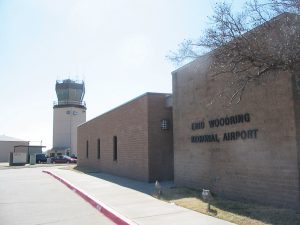 Enid was the first city in Oklahoma to have a municipally funded airport. The city continues to make improvements, including the construction of a new terminal that is designed to make a good impression on travelers. Pictured is the old terminal in 2010; it will be demolished once the new one is completed. (Public domain photo)

The new terminal has been built behind the old one utilizing part of the parking area. When the new building is finished, the old terminal will be demolished approximately four to five weeks later and replaced by sod. The remaining furnishings and equipment will be sold through an online auction. Naturally, during the nine-month period of construction, there were a few hiccups ranging from weather delays, minor issues that are part of any project and confusion among travelers who had to find a new place to park.

“We carved out a little part of the parking apron and put up signs to alert people where they could park, but as you can imagine, that can be a little confusing. Some people weren’t seeing the signs so we had to make them more visable, but for the most part, people followed the car in front of them hoping that they knew where they were going. Luckily, most of our passengers are regulars so there weren’t too many issues,” Ohnesorge said. “When all is said and done, the new terminal will be a great update to the airport and wonderful addition to the Enid community.”