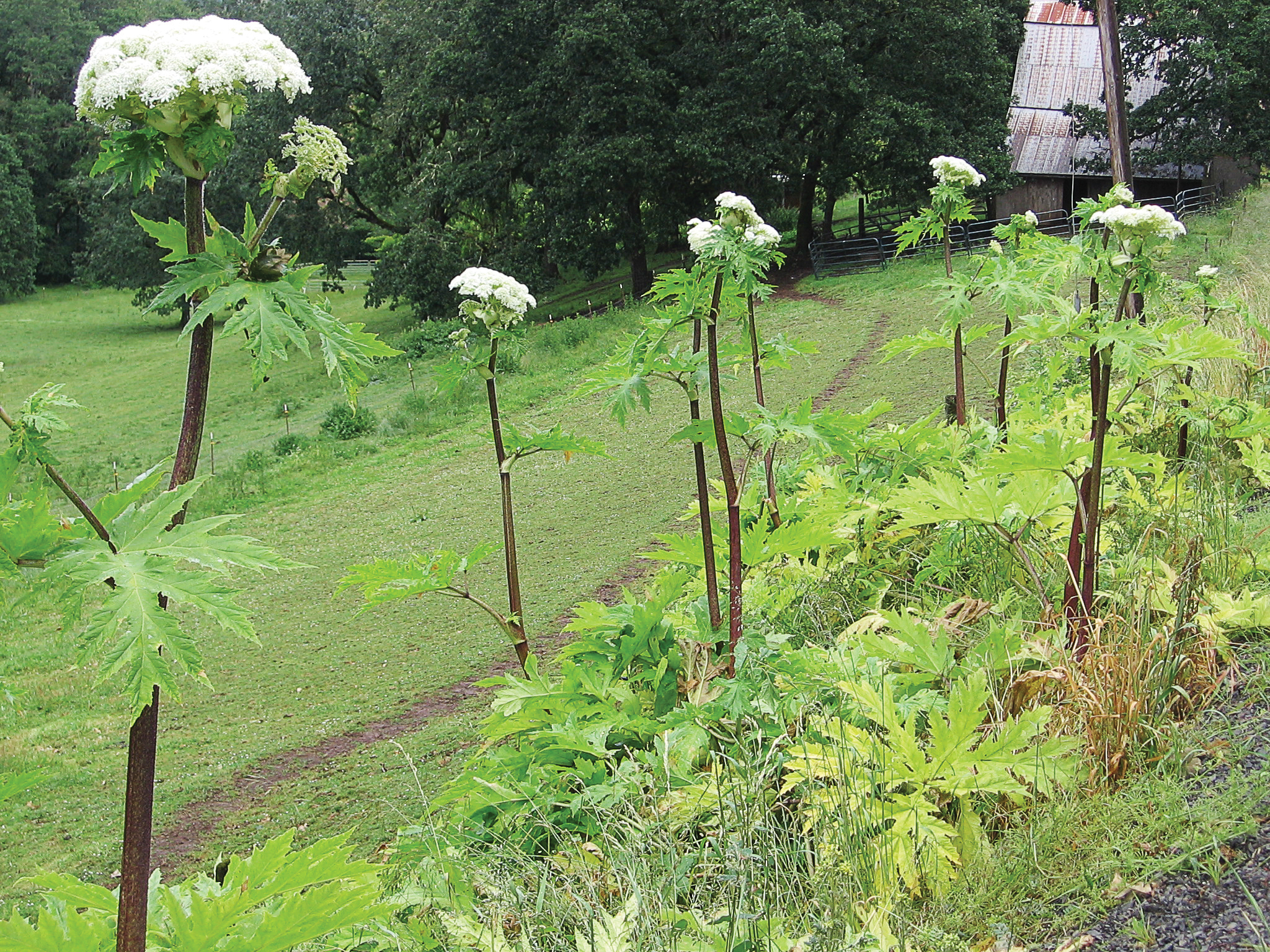 There is a real monster out there, growing to heights perfect to brush against passers-by. It can grow to 15 feet tall and its arm spread is an envious 2-3 feet wide. It sports innocently disguised white “flowers” on its head.

This invasive weed is better known as giant hogweed — scientifically known as Heracleum mantegazzianum — and is said to be a native of Eurasia that was probably introduced to North America as an ornamental garden plant. Once introduced, it escaped into natural habitat where it became wild and unruly, popping up on trails, roadsides and the edges of fields and streams. It can also be found in various backyards. When it overtakes some municipalities, it calls for heavy artillery from environmentalists to be effectively banished.

Giant hogweed, for those unfamiliar with it, can cause great discomfort to humans, thanks to its noxious watery sap that results in severe blistering, burns, possible scarring and hypersensitivity to sunlight. It can also cause blindness. Growing occasionally to 15 feet tall with a hollow stem, 2-4 inches in diameter, with reddish-purple blotches and bristles, Giant hogweed leaves are acutely incised and may grow to a width of up to 5 feet. Their white flowers are tightly clustered into an umbrella shape of up to 2 1/2 feet wide.

The large perennial herb is in the carrot and parsnip family and is similar in appearance to Queen Anne’s lace, angelica, wild carrot and cow parsnip. Other species that may be mistaken for giant hogweed include the common elderberry and poison hemlock. Knowing the difference between the plants is mandatory and could save your life one day. 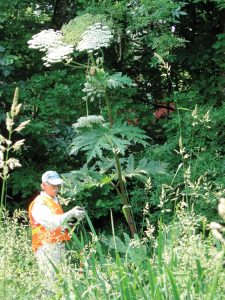 A man uses a GPS to mark the location of a giant hogweed. In Oregon, locations that have been affected by giant hogweed are monitored regularly to make sure the plant doesn’t return. (Photo provided by Beth Myers-Shenai)

Care must be taken in eradicating giant hogweed. No one should mow or use a weed trimmer without wearing protective clothing, taking care to cover any exposed skin. It should also be reported immediately to the county extension, allowing for a positive identification.

According to Mitch Bixby, botanic specialist of the city of Portland Bureau of Environmental Services in Oregon, the biggest challenge in eradicating giant hogweed is probably finding it.

“This is always a problem for early detection, both in urban and in rural areas,” said Bixby. “For us, ‘getting the word out’ so folks know that it is a problem is probably our best tool.

“Managing it is fairly straightforward. If there are a small number of plants, we’ll actually dig them out. If they’re flowering, we cut them into pieces. Either way, we bag that up and put it in the trash (not compost). For larger plants or groups of plants, we use a herbicide, which also helps minimize the risk to ourselves. We also try to follow up every year or every other year on most known infestations within Portland; (about 90 properties) are now completely without plants. We hope these are ‘eradicated’ patches, but sometimes a long-lived seed surprises us.”

One of the key collaborations for Portland’s Early Detection Rapid Response program has been with the state. Oregon Department of Agriculture keeps track of all infestations statewide; it is the default organization on hogweed.

“ODA began targeting hogweed in the late ’90s or early 2000s; we teamed up with them in 2009 and have been co-managing hogweed ever since,” concluded Bixby, adding that he knew that King County, Wash., had also been very active over the years.

In 2001, the hazardous plant was first identified in Connecticut, which, as of last June, had confirmed giant hogweed in all eight counties. Many of these sites are under control, but educational outreach is on the way to further warn the public about giant hogweed. This outreach will address the plant’s critical health risks and offer control alternatives.

Last year Virginia Tech had discovered the dangerous weed in three Virginia counties — Clarke, Rockingham and Fauquier — but fortunately no evidence of spread was found at these sites.

Michael Flessner, PhD, extension weed science specialist and assistant professor at Virginia Tech School of Plant and Environmental Sciences in Blacksburg, Va., surmised that they were planted by unwitting homeowners.

“One person thought he was planting angelica, a look-alike plant in the same family as a giant hogweed, but it ended up being giant hogweed,” said Flessner. “The individual realized it wasn’t angelica but liked it enough to keep it and never had any problems with it. The other plantings were also certainly intentionally planted as ornamentals.” 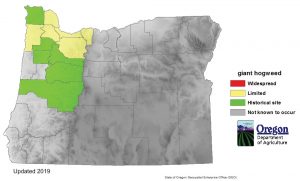 This map shows areas in Oregon where giant hogweed has been reported. (Photo provided by Beth Myers-Shenai)

Each summer Flessner fields calls about a suspected giant hogweed, but those plants always ended up being a close relative — cow parsnip. Until last June, that is.

“The photos I received from Mark Sutphin looked like giant hogweed to me, but since this would be the first reporting in Virginia, I coordinated with Virginia Tech’s Massey Herbarium and the Virginia Department of Agriculture and Consumer Services (the noxious plant regulator in Virginia) to send samples to Blacksburg for expert identification by the herbarium curator, Dr. Jordan Metzgar,” said Flessner. “He tweeted confirmation on Friday, June 8, and by Monday, the internet had run away with the story. I regret the public fear that ensued, but the media attention was certainly the reason for the other three reports (two in Rockingham County).”

According to Flessner, there are officially four reports, which were confirmed as giant hogweed. But there were two additional locations that got press attention, but the plants were destroyed before VDACS could get there to verify.

“Of the four confirmed, VDACS removed flowers and seedheads within days of confirmation to limit seed production and potential spread,” said Flessner. “VDACS returned to treat plants with herbicides or physically dig and remove the plants, according to the landowner’s preference. There are plans for VDACS to visit the sites again this season. To the best of my knowledge, the 4 confirmed cases are all contained.”

Wild populations of giant hogweed are also found in the Pacific Northwest, Maine, New York, Massachusetts, Connecticut and Pennsylvania. North Carolina has also reported one in one county. Many states have adopted the mandatory rule that if a citizen spots a possible giant hogweed, they must report it immediately since it is a Tier 1 federal noxious weed, which is the most critical classification.

According to Beth Myers-Shenai, integrated weed management coordinator in the Oregon Department of Agriculture, there have been large populations in western Washington and the New York state has had very large populations. 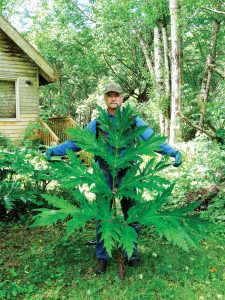 Giant hogweed earns its name as it can grow 15 feet tall; its leaves can also grow to a width of up to 5 feet. (Photo provided by Beth Myers-Shenai)

“I believe it is fairly common on the upper East Coast and upper Midwest states of the U.S.,” said Myers-Shenai, an invasive plant specialist who has been controlling giant hogweed since 2004.

“Giant hogweed excludes native plants because it grows so quickly and densely, and it causes permanent skin injury to people who get it on skin exposed to sunlight.”

Myers-Shenai said most of the populations have been very small and easy to control and have been eradicated within three to five years. They have all been found in northwest Oregon, west of the Cascade Range. They are nearly all from ornamental plantings that have escaped, sometimes to neighboring yards or natural areas. In two instances, they were planted near stream banks and local flooding carried seed further down the stream system and created more intensive infestations.

One of those areas has been eradicated — about 13 acres of scattered plants when first found — and one is scattered over about 150 acres in an urban area near Portland, which is still under the control process after 10-plus years; however, densities of plants have dropped by at least 90 percent in that time. Another population was found growing next to a road, likely from dumped yard debris.

“After first finding giant hogweed in Oregon in 2001 and getting word to the public via media outlets, a large number of individual populations were initially found,” said Myers-Shenai. “Now there are a number of potential sightings reported to us each spring, starting around May, but those are nearly all cow parsnip, a native cousin of giant hogweed. We’ve averaged one to two confirmed reports of giant hogweed in the last five years or so. All known populations of giant hogweed in Oregon are under control or have been eradicated. It is a federally listed noxious weed and is on our state’s ‘A’ list, which is the highest priority for detection and eradication.”