In 2017, Borrego Springs’ microgrid was connected to a solar farm and rooftop solar PV systems. It is the largest microgrid in the U.S. that could operate totally on renewable energy. (Photo provided by SDG&E)

Such catastrophes have sparked interest in innovative microgrids.

The microgrid is a small network of electricity consumers with a community source of supply that is usually hooked up to a centralized countrywide grid but is able to operate independently.

Borrego Springs, Calif., a remote jewel of a town in the desert, boasts 3,400 residents and is an International Dark Sky community about 90 miles east of San Diego. It also gets extremely hot — often more than 100 degrees — and suffers from strong winds, lightning strikes, forest fires and flash floods, all of which contribute to frequent electricity outages.

Having power at such life-threatening times is critical, especially since in unforgivable heat, senior citizens and other frail people will die from lack of air conditioning, for example.

Borrego Springs’ microgrid in 2017 was connected to a solar farm and rooftop solar PV systems, which made it the largest microgrid in the U.S. that could operate totally on renewable energy.

According to Wes Jones, communications manager of San Diego Gas & Electric, the Borrego Springs microgrid received grant funding from the Department of Energy and the California Energy Commission; SDG&E will then deploy technologies that will meet the service needs of the customers to ensure safe, reliable and efficient operation of the electric grid.

“Energy storage, microgrid and control system technology is still evolving and emerging, and it is very important to deploy the appropriate technology for the use case,” said Jones. “It is also very important to commit time and resources to perform dynamic power system modeling of the new microgrid, to effectively deploy technologies and systems that will operate safely with the electric grid and provide safe and reliable operation in an island condition.” 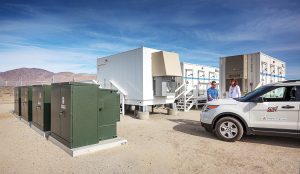 Pictured is a close-up of Borrego Springs’ microgrid. (Photo provided by SDG&E)

In the event of an emergency, the operating practice requires a full visual field assessment to ensure the conditions are safe to operate the microgrid. Once the conditions are safe or the fault/problem has been safely isolated, the Borrego microgrid can be operated remotely from the distribution control center. Once repairs have been addressed to the electric grid, the system operator can flawlessly transfer the customers from the microgrid to the electric utility.

“During a planned outage, the system is designed to seamlessly transfer from grid to microgrid and vice versa, and the customers will not experience an outage or interruption,” said Jones.

One reason the microgrid industry is booming is resiliency; another is that these renewable energy islands can ease access into the contemporary, larger grid. Saving money is yet another reason microgrids come into play — there is no need to build new transmission lines. The need for building new transmission lines is negligible.

According to Conrad Eustis, director of retail technology for Portland Gas & Electric, microgrids were a much hotter topic following Hurricane Sandy.

“They’re still important but not as exciting news as they were in the beginning,” said Eustis, an engineer. “Connecticut was one of those hot beds. The state was offering substantial grant money, and if you Google it, you’ll see that there were eight projects proposed a year ago, all of them desiring a microgrid to operate behind the utility meter and to possess black start and load-shedding capabilities.”

Hartford, Conn., was the first microgrid program of its kind in the nation. It was also the first to pass a microgrid law in 2012, and since then, New York, Massachusetts, Maryland, New Jersey, Rhode Island and Washington, D.C., have all introduced microgrid incentives.

After Hurricane Irene and a major snowstorm damaged the East Coast in 2011, Hartford built a fuel cell-powered microgrid that began operating in March 2017.

Co-op City, a community of 50,000 residents in the Bronx, is one of the largest residential end-use customer microgrids in the world. It operates a combined heat and power — or CHP — microgrid, with 40.8 MW total capacity and capital costs of $68 million.

These mini-grids can be confusing in what they can and cannot do, said Eustis.

“Many people look at microgrids to meet their electric needs when the main grid goes down, whether it is for two to six hours or at least a day or even for weeks. Then we need to ask if the microgrid is designed to serve one customer or many customers. Does the microgrid need to provide just critical needs or mostly the same amounts of electricity? The last important characteristic is at what cost — much higher than the utility price; comparable to the utility price; or hoping it is less costly than utility rates?”

With just these four characteristics there are 36 combinations. The cheapest way to get backup power for a week to meet most of the facility needs is with a diesel generator with on-site storage of diesel fuel; however, even this cheapest solution is more costly than electricity from the utility, which is why most customers do not have backup power, according to Eustis.

The Department of Energy’s definition of a microgrid requires that it be connected to the main grid most of the time and able to deliver energy to the grid or take energy from the grid. When the grid goes down, the microgrid disconnects from the main grid to supply backup power to one or more customers.

“The only realistic microgrids have at least a battery to provide backup power to critical loads for a few hours when the grid goes down,” said Eustis. “When the grid is up, the battery provides services to grid operators, for example, to store excess solar energy by day so as to provide power by night. By adding a solar panel to the microgrid, there is a reasonable chance the system can provide emergency communication services for several weeks in most parts of the year.”

Last fall the city of Portland with three partners — Portland General Electric, PSU and the Massachusetts Institute of Technology — launched a $300,000 pilot “PrepHub” project that desires to build 40-50 microgrid statues in Portland parks that will become common landmarks.

“We have finished the design of the first PrepHub unit and expect to place it online at the end of the summer,” said Eustis. “The cost for this prototype is expensive. At scale (not just devices for the city of Portland) we would hope the cost to be less than $75,000 each. Citizens who charge their phones on such a unit will not have to pay for it; the electricity to fully charge a phone is less than one cent.”

California’s microgrid was borne of wildfires, lightning strikes, flash floods and forest fires. What was Portland’s catalyst for microgrids?

“The impetus was the means to provide emergency communication services via its BEECN (Basic Earthquake Emergency Communication Node) nodes for its citizens in the event of a major earthquake, which disrupts most services for water, gas, electricity and communication (both mobile and internet),” said Eustis.

“The initial 50 or so, central gathering nodes were not expected to have any electricity except batteries. The city learned about the MIT PrepHub concept and thought it could be a useful way to provide more robust and longer term services. PGE’s interest is that the model of battery storage used for emergency could go beyond emergency to create value every day to store excess wind and solar energy. Further, the energy storage model could go beyond 50 city sites to be an option in thousands of residential premises. For PSU there were numerous educational aspects that could demonstrate PSU’s strengths and roles as a metro university.”