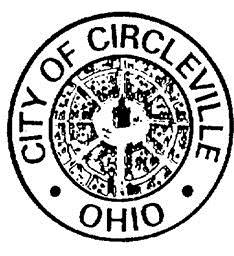 Circleville, Ohio, is named for its original shape, which was in turn crafted around a Hopewell earthwork erected between 100 B.C. and A.D. 500.

Earthworks are manmade geometric elevations in land level and can memorialize the burial place of ancestors or mark the movements of celestial bodies or the rising and setting points of the sun.

The 1,100-foot-diameter earthwork 25 miles south of Columbus, Ohio, provided the template for the layout of the town created in 1810. When surrounding Pickaway County was established that year, Circleville was selected as the county seat with the intent to preserve and maintain the Hopewell mounds. The county courthouse was built in the center of the innermost of the concentric circles of streets and parceled lots.

Circleville was founded by European-American settlers migrating westward after the American Revolutionary War. The first sale of property in town was celebrated with a barbecue and a wheel of cheese weighing several hundred pounds transported to the barbecue by sled.

The town was incorporated in 1814 and by 1827 boasted 725 residents, along with a private school, public school, one church, nine stores, three pharmacies, three groceries and a market house.

Within the following decade, however, citizens became dissatisfied with Circleville’s layout, claiming the lots were too irregular and inconvenient, the circular plan wasted space and the area around the courthouse was unpresentable.

In March 1837 town leaders petitioned the Ohio general assembly for authorization to alter the town’s structure. The legislature granted authorization to change any quarter of the circle upon consent of the landowners in that quarter.

By 1856 all four quarters were altered to a grid pattern. The work involved demolishing, moving and constructing buildings and grading and repaving streets. In the process all vestiges of the earthworks were destroyed.

By at least one historical account, Circleville’s citizens regretted changing the original layout.

Since 1903 Circleville has hosted an annual pumpkin show billed as “The Greatest Free Show on Earth.” The four-day event is ranked the sixth largest festival in the United States and draws more than 300,000 visitors a year. This year’s festival will take place Wednesday-Sunday, Oct. 16-19.