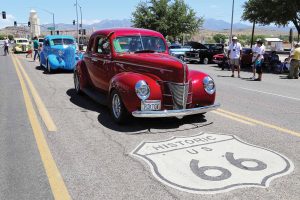 Kingman is on many people’s bucket list as the city hosts some of the longest sections of the old Route 66 that still exist. (Photo provided) 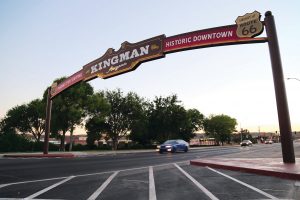 Antique cars cruise down Kingman’s section of Route 66 as part of the annual Historic Route 66 Fun Run. The 2019 event occurred in May. (Photo provided)

An American treasure and bucket list item for many, Route 66 was one of the original highways in the U.S. highway system. Established in 1926 and stretching from Chicago all the way to California, the route served as a means of travel for those looking to migrate west. Along the way, pitstop towns that already existed became popular tourist destinations, and some are still thriving today.

Long before travel as we know it today, communities existed as hubs for railroads. Kingman, Ariz., is one of those communities that, based on placement and a bit of luck, then thrived as vehicular travel grew in popularity. Situated at the crossroads of modern-day U.S. 93 out of Las Vegas and Interstate 40 in Arizona, Kingman is at the heart of Route 66.

A city of just under 29,000 people, residents recognize their community’s existence as a historical treasure on many fronts — a town of industry, a railroad hub and a remaining piece of the original Route 66, with mention in Bobby Troup’s popular song and all.

“We’re at the heart of the old Route 66 so that’s a really big deal,” Planning and Economic Development Director Gary Kellogg said. “A lot of our tourist traffic is heavy with folks who are interested in that. We have some of the longest sections of the old Route 66 that still exist, one of them going right through town.”

The community capitalizes on their popularity as a Route 66 town, featuring a visitor’s center called The Powerhouse, chock-full of memorabilia as well as a nod to another popular story of the same era. 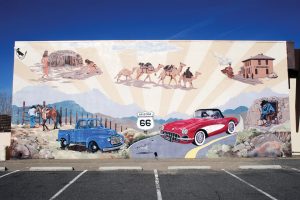 Pictured is a mural that was painted on the Mohave Museum, highlighting Mohave County’s history. (Photo provided) 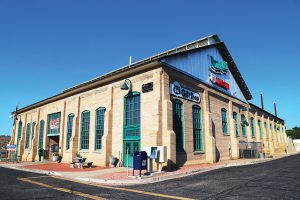 “When visitors come here, they look for the downtown area,” Kellogg said. “We have a visitor’s center that at the turn of the century actually had generators that fueled the mining industry. Housed within there is the Old Route 66 museum. In that museum, they’ve recreated ‘The Grapes of Wrath’ because a lot of those folks fleeing the Dust Bowl came through Kingman. The Arizona Route 66 Association is also based here.”

Railroads and Route 66 aren’t the only historic stories of Kingman, however. The city was also home to a World War II-era military base, which still exists today.

“Historically, the town was a very active railroad community, but before that, we were instrumental in wartime,” Kellogg said. “We have a historical former military base here that was constructed during World War II — the airbase here was a gun range that trained pilots in B-17s.”

In addition to a robust transportation history, Kingman is also home to the largest industrial park outside of metropolitan Phoenix, bringing a diversity of industry and resident to the community.

“We employ about 2,600-2,700 people in all different types of industry,” Kellogg explained. “Within the park, we actually use the old railroad ties and have a little rail system because a lot of our habitants are served by rail.” 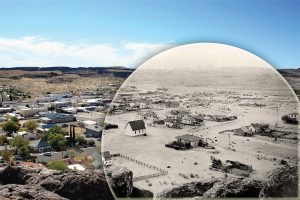 Pictured is a look at modern-day Kingman and how the city appeared circa 1890 from St. John’s overlook. (Photo provided) 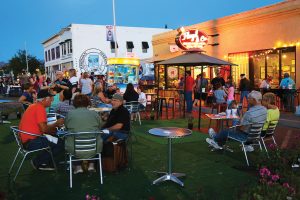 People turn out to a First Friday event at Floyd & Company, just one popular restaurant in downtown Kingman. (Photo provided)

“We’re five hours out of Los Angeles, two hours out of Las Vegas and three hours from Phoenix,” Kellogg said. “Those are all easy day trips for business purposes right there, plus you don’t have the same cost of living here as you do in some of those metropolitan areas.”

The city also sits not too far from the Colorado River, another big draw for business and pleasure alike.

“If you’re an outdoors person, the Colorado River is just a short half-hour drive away. So on top of being less than an hour from wildlife, we’re not far from big attractions, too,” Kellogg said.

Kellogg, though admittedly biased toward his beloved community, said Kingman is basically the whole package, and with improvements the city is looking to make in terms of conveniences, he foresees its popularity increasing.

“We have a great industrial park, a great community college and transportation. Cost of living here is moderate compared to other places, not to mention our climate is pretty temperate,” he said. “We’re continually working on improving the number of restaurants and stores here. We have all the major stores here, so it has still that small-town feel with big city amenities. And if you really need the big city, you’re really not far at all.”