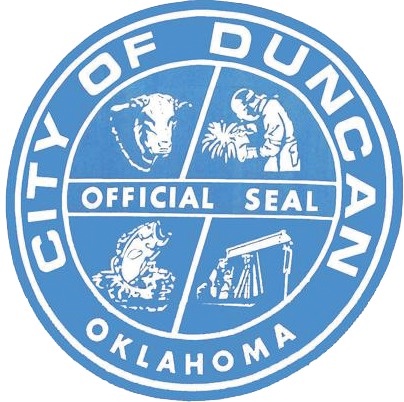 The city seal of Duncan, Okla., population 23,484, contains a quartet of images depicting the city’s heritage of livestock and agriculture, natural resources, technology and industry.

Duncan is historically known for its fortuitous location along the Chisholm Trail, an 800-mile route carved through the prairie to herd nearly 10 million beef cattle from San Antonio, Texas, to Abilene, Kan., for the two decades following the Civil War.

The city is the namesake of Scottish merchant William Duncan, who with a business partner in 1881 opened a trading post at the junction of the Chisholm Trail and the east-west route from Fort Sill to Fort Arbuckle. In 1884 Duncan was appointed postmaster of the settlement, then a part of the Chickasaw Nation.

In 1889, learning the Chicago, Rock Island and Pacific Railroad was to build a rail line along the trail, Duncan built a new store and homes for his family at the anticipated site of the railroad.

He plotted the surrounding land and leased the lots to newcomers arriving in the area. The town’s population reached 300 residents when the first train rolled through on June 27, 1892, regarded as the town’s birthdate.

When Oklahoma achieved statehood in 1907, Duncan was named the county seat of Stephens County. Centrally located along the north-south axis of the county, Duncan officials appeased the northern and southern county residents by placing the county courthouse in the middle of Main Street and etching the road in a circle around the building.

Duncan became a boom town when oil wells opened in 1918. The city enacted regulations to ban shacks and to channel growth in an organized manner. The oil and agricultural industries facilitated the town’s meteoric growth during the early 20th century and the town adopted the slogan, “The Buckle on the Oil Belt.” Halliburton Corporation, founded in 1919, remains Duncan’s largest employer.