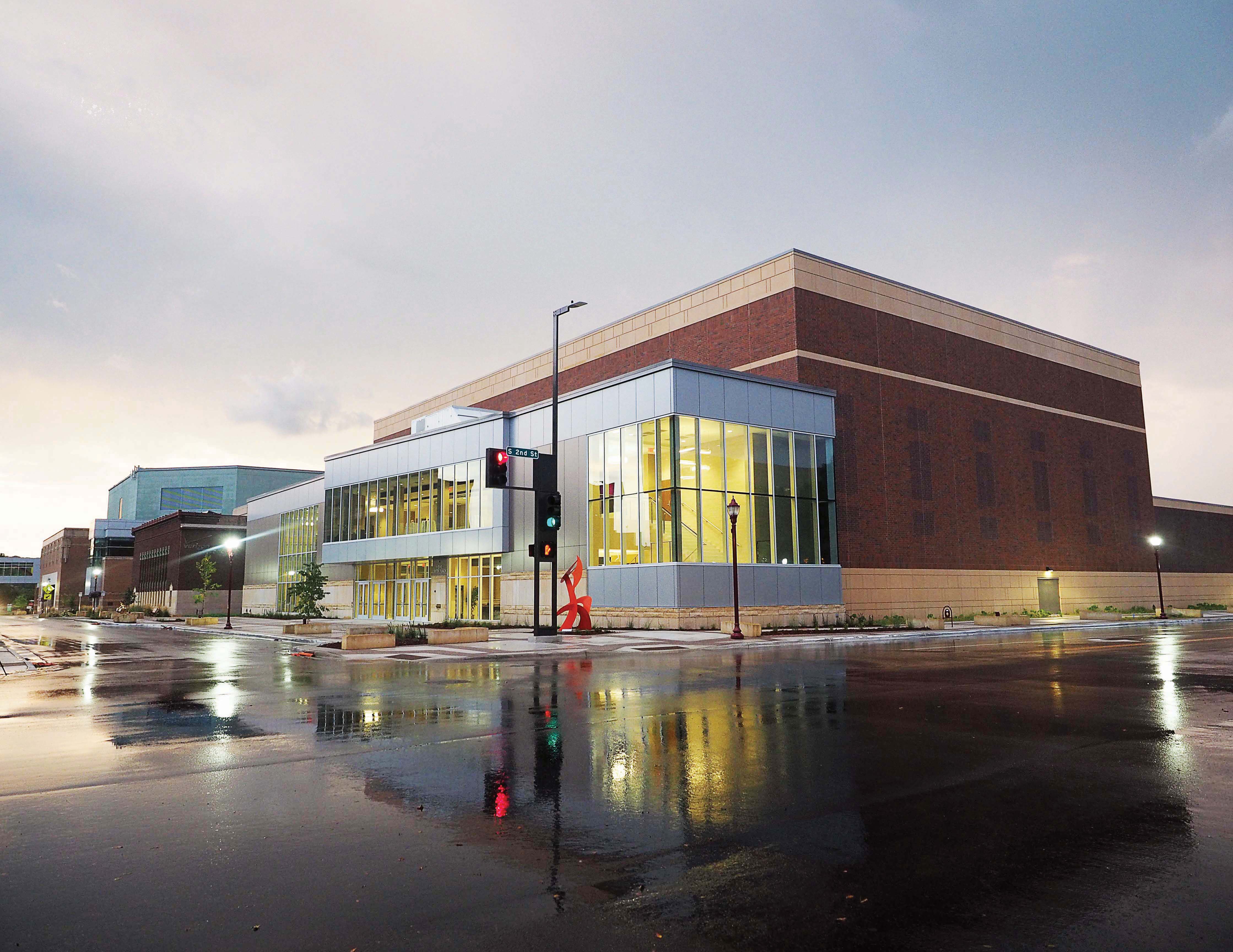 It may not be as simple as “If you build it, they will come” — the iconic line from the movie “Field of Dreams” — but several cities and towns are finding that having a conference or convention center is helping to boost the local economy.

One city that entered into a convention center project with that idea in mind is Mankato, Minn., population around 42,000. The Mankato Civic Center — previously the Verizon Center — was built in 1995 as a multiuse facility.

According to City Manager Pat Hentges, the convention center itself has a maximum capacity of 1,000 attendees but attached to it is an arena, utilized by the University of Minnesota’s hockey team and for concerts, that seats 5,000. There’s also a grand hall that seats about 3,000; it is used for exhibitions and smaller concerts and events. 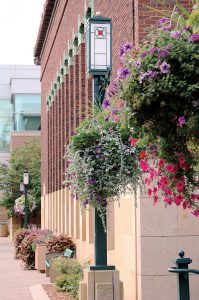 A historic Mankato landmark built in the early 1900s…

Hentges said building the civic center was “first and foremost a way to revitalize the downtown core of our city.”

He said in the early 1990s Mankato’s downtown “suffered dramatically.” The retail presence moved out of downtown to a section of the city called the Hill, leaving the downtown with just a limited business presence.

Since the civic center was built, the city has seen that revitalization — bars and restaurants downtown have grown, providing entertainment before and after concerts, games and conventions.

“They are thriving,” Hentges said. “Sales have gone up $3 million a year since we built the center, and there’s been a $25 million related entertainment investment in downtown.”

It also gave a corporate presence downtown with the development of a $4 million multistory building that houses corporate offices for accounting firms, a regional office for the Mayo Clinic and more. Hentges said the proximity to the civic center is a positive for recruiting young professionals.

The Mankato Civic Center was built using special legislation that allowed the city to use a local option income tax. The entire civic center is owned by the city, was developed by the city and is now operated by the city. Hentges said at first the city contracted with Ogden Entertainment to manage the center with some city employees, but about 18 years ago it converted to complete city oversight. Hentges thought that was pretty typical to his knowledge for smaller venues in the Midwest. He said a number have started with contract management and over time transitioned to municipal management.

Hentges has been with the city for 23 of the civic center’s 24-year life and said it was beneficial for Mankato to have started with a management company. Having that private management allowed the city to “maximize our potential, learn the trade — including naming rights — I don’t think we’d be where we are today if we started with total municipal management,” he said.

The inclusion of the arena brought the Minnesota State Maverick’s men’s ice hockey team to NCAA Division 1 level status because of its Olympic-sized ice rink. Hentges said the arena was built with two objectives: to drive a greater presence by MSU, located on the fringes of the city to downtown, and secondly the reutilization of downtown. 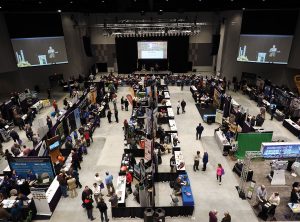 “All of these components come under the flagship of the civic center and are part of our revenue stream,” Hentges said.

Conventions are an important part of the civic center but equally important are all the events — the hockey games, air show at the regional airport, concerts and other ticketed events. And, according to Hentges, all of these components work to help the others.

“Every major country artist and classic rock icon as well as up-and-coming groups has played here as well as off-Broadway shows,” he said. “It’s helped us grow our convention business — we’ve had some of our better convention years.”

Hentges said Mankato was one of the first smaller venues to have a naming rights agreement. The city just completed a 20-year agreement with Verizon and as of April 1 reverted back to Mankato Civic Center. The initial naming rights agreement was with a Midwest-based cellular data company, which Verizon then purchased. Hentges said the city is currently entertaining potential agreements with other more regional companies.

He said 25 percent of the center’s revenue comes from naming rights and advertising in the arena. Food and beverage sales are also a critical part, whether it is for sit-down dinners or vendors at hockey games and events. There’s been more interest in advertising because of events held at the arena. Hentges said creating good relationships with advertising companies is also critical.

While the city is not operating any hotel facilities, a Hilton is connected to the civic center via skyway and another brand-name hotel is considering development and would also be connected via skyway.

While the civic center has been the centerpiece of an economic revitalization, there are downsides to consider as well. Hentges said the convention business is “very competitive” and can be a loss leader. Mankato Civic Center is operating on a 20 percent overall budget deficit; however, that deficit is covered by the food and beverage tax.

He said a half-percent sales tax helped build and maintain the center and there’s a 1 percent food and beverage tax — half of which is used to cover the deficit.

A conference center is a large piece of infrastructure, taking a lot to maintain its roofs, equipment, ice-making machines and floor coverings.

“We want to give a good impression so we’re constantly refreshing and that takes lots of dollars, so the operating challenge is to make sure you sustain the revenue to finance maintenance.”

Hentges advised, “Any community looking at this needs to go in with eyes wide open. We have a multiuse facility with a state-of-the-art ice-making machine, we hosts concerts and have a convention center and grand hall.”

For Mankato, the convention center continues to be a positive thing and “a regional identifier.”

“A convention center itself may be the niche needed, but being able to have a broad range of events helps keep it filled,” Hentges said.

Convention center or conference center — what’s the difference? Those two names have been at times used interchangeably, but according to Nancy Lindemer, president for the Americas of the International Association of Conference Centers, the difference is basically size.

A convention center is larger, has bigger spaces for thousands of attendees and is usually found in bigger cities like McCormick Place in Chicago. It has flexible places, big exhibition spaces and multiple meeting rooms. Often, convention centers are city owned. 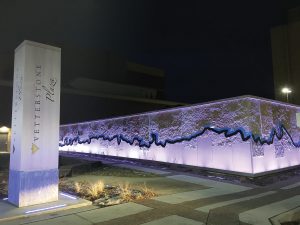 Vetter Stone Plaza — made of Minnesota stone — is an outdoor gathering space at Grand Hall on campus of Mankato Civic Center. The space includes art, which builds from a compressed image of the Minnesota River. The Vetter Stone Amphitheatre is made with the same stone as well. (Photo provided by Mankato, Minn.)

Lindemer said IACC participated in a report conducted by the Events Industry Council that “took a look at the global economic significance of events,” and the report shows that conference centers “absolutely can bring value” to cities or towns.

The report took a look at direct impacts like spending and jobs involved in the planning and producing of events; indirect impacts or supply chain, including vendors needed, the people who produce the food served, etc.; and induced impact, or the spending done by employees of conference centers on housing or other necessities as well as participant spending.

The report showed that the business event sector is the eighth largest industry based on sales. In the U.S. that results in $325 billion in direct spending with 329 million participants. Average spending, according to the report, is $1,156 and the industry created 5,905 jobs in 2017.

Lindemer said if a community is considering this venture, it should determine if there is a demand and have an understanding of the market.

She said one of the keys is to “really do your due diligence, conduct a feasibility study, talk to the local CVB (Convention and Visitor’s Bureau) and the chamber of commerce, know the demands; and if all things point in the right direction, it can absolutely increase revenue.”

She also suggested examining what is driving business in the area and what businesses could use a convention space. Are there state associations that may be prospects? Are all the hotels full? What is the draw to your community or region?

Lindemer said, “There’s a lot more to it than ‘build it and they will come.’”

The city of Conroe is embarking on a convention center and hotel project. According to Assistant City Administrator and Chief Financial Officer Steve Williams, plans for what will be the Conroe Convention Center and Headquarters Hotel at Grand Central Park began in 2009.

“Due to the economic downturn we didn’t proceed at that time,” he said. “We picked it up again in 2016 and updated the study.” 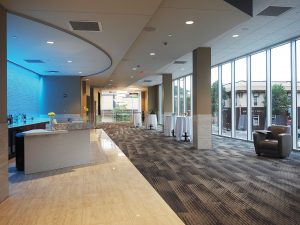 Meanwhile, Johnson Development Corp. developed Grand Central Park — a mixed-use development with residential, commercial and retail on the southern portion of the city. So when the city refreshed its study officials thought the convention center would work best at Grand Central Park. The city issued a request for proposals and Garfield Public-Private LLC was chosen in May 2017 to move forward with an updated feasibility study and predevelopment agreements.

The Conroe project will be a public-private partnership. The city will own the convention facility and parking, and the hotel will be owned by a “local government entity,” similar to an economic development corporation, serving more as a conduit issuing debt.

It is still to be determined whether the whole project will be a franchise or ran by an operating company, but officials don’t anticipate having city employees involved.

Williams said the city had quite a bit of initial support for the $86 million project — $56 million will be funded through revenue bonds and $29 million by the city, which may be a little less since the land was partially donated. Construction is slated to begin in November 2019 with initial projections of completion in April 2021.

“We believe it fills a need for a full-service upscale hotel in the city of Conroe and Grand Central Park is the ideal site,” he said, adding that officials believe it will have a regional and statewide draw with professional associations that may have a need for convention space.

Williams said, “I think anyone undertaking a venture like this will want to do a significant amount of work identifying the need. We’re using this project to guide development and serve as a catalyst for development around it.”

“Our hope and anticipation is it’ll fill a need and fuel development on the same scale. Conroe is a rapidly growing city already; we’re doing our best to guide that development.”

So if a convention center seems like it’ll be your city’s “field of dreams,” do your homework first.