Pity Scotland’s Loch Ness Monster; it now has competition in Brooklyn, N.Y.’s, Prospect Park Lake for interesting “aquatic specimen.” Its new opponent is arguably the same size albeit it’s bright orange. Meet Lake “Mess” Monster — though it has been renamed “The Floating Goat” by a popular vote — Prospect Park Alliance’s brand-new aquatic weed harvester. It chops up underwater weeds and deposits them into a holding tank, from which they will be removed and used as mulch on shore.

This floating lawn mower will keep the lake clear of annoying duckweed and floating water primrose, according to its website, www.prospectpark.org. The new gift was a replacement for the older 20-year model that had been decommissioned in 2014, and Prospect Park was able to obtain the newer model with funding help from the participatory budgeting process.

It is not alone in having such a varied fleet. Municipalities of today are likely to have numerous pieces of equipment within their fleets just to be able to satisfy the diverse tasks asked of them. Because necessity is the mother of invention, some unusual additions to fleets are procured to tackle the odd jobs at hand from airboats and horses to air pollution-measuring vehicles and more. 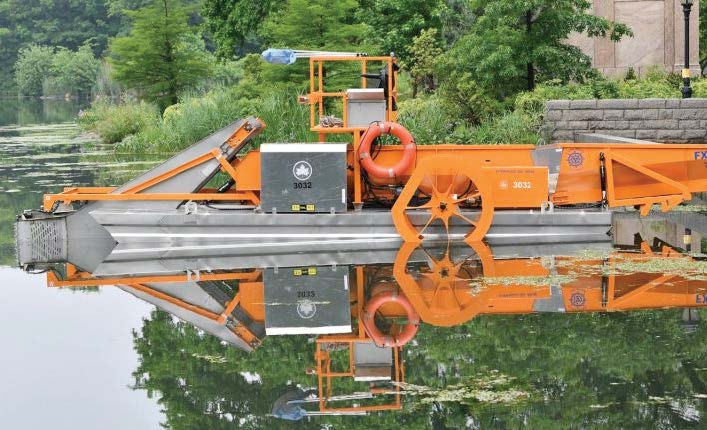 Witness Dover, New Hampshire which has a colorful addition to its fleet of customary police cars and vans in its popular mounted police unit.

Officer Michelle Murch has been a member of the city’s police force for 19 years and has been assigned to the mounted unit for 12 years.

According to Murch, the unit is aided by a tremendous volunteer force that helps with the care of the horses and the education of the public on how to behave around the animals.

The Dover Mounted Horse Patrol receives no tax funding, but community businesses are paddock sponsors, which allows the unit to use the money to care for the horses in various aspects — farrier, vet, shaving or fly spray — and in return, each paddock sponsor receives a 3-by-5-foot sign, displayed on the paddock fence near the stable. 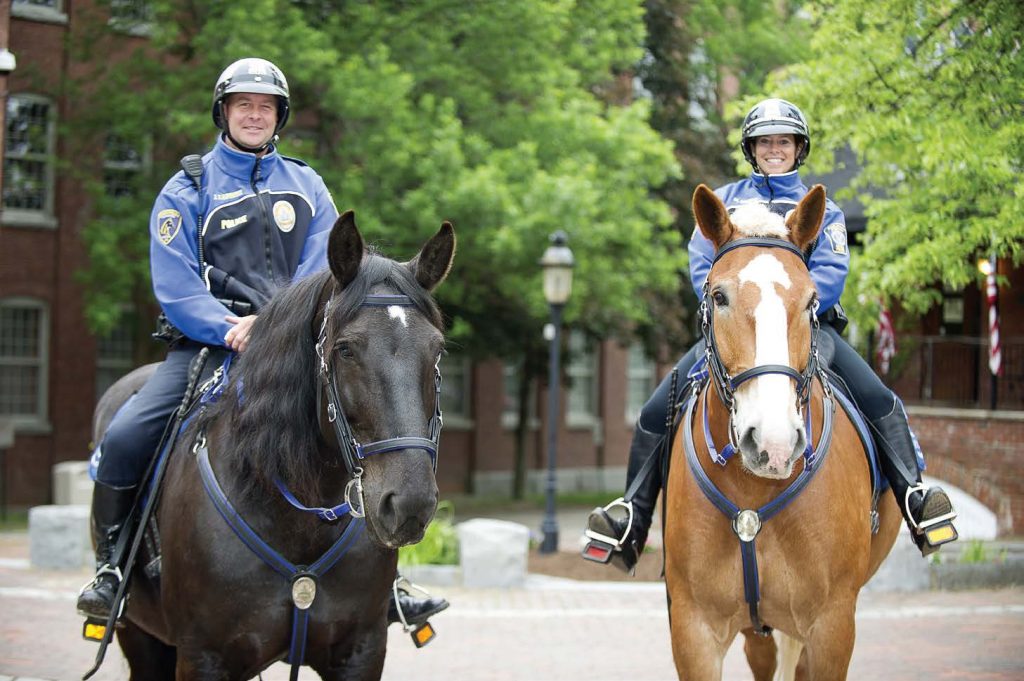 Officers Joe Caproni and Michelle Murch of the Dover Mounted Police pose with their horses. Caproni is on Rasa, a Percheron-cross and the first mare in the department, and Murch rides CJ, a Belgian gelding. (Photo provided)

The unit, which has had more members in previous years, only has two officers assigned to it, Murch explained.

“The training period for each officer is different depending on how much riding experience the officer has prior to being assigned to the unit,” said Murch. “They take riding lessons and go to Canada for training with the Royal Canadian Mounted Police for two weeks to ride with them. This training consists of three sessions of riding a day and is free to mounted officers.”

The mounted unit is used in all major events in the city and “not utilized for crowd control as much as a visible presence in large crowds, but if needed, we could be used to contain or move crowds,” added Murch.

The mounted officers ride in Australian stock saddles, which are a cross between English and Western. They also ride draft horses because of their calm nature. The breeds of these gentle giants are usually Percherons or Percheron crosses, with CJ the horse being the first Belgian.

Police horses are an instant attraction with the public and especially with children and their parents. The officers are happy to stop and answer questions from fans as a means of providing a positive face of the police department.

The most challenging aspect of running a mounted unit, said Murch, is gaining support and funding.

“Other than the officers’ salaries, the Dover Police Mounted Unit is entirely funded by donations. This means that, in addition to feeding and caring for the horses, a significant portion of our job involves fundraising, over and above our law enforcement duties. We also work hard to maintain a positive image for the department and to recruiting and maintaining a group of volunteers to help support the program. Without the generosity of the community and the work of the volunteers, it would be impossible to do the community policing work that we are able to do as members of the mounted patrol.”

Asked whether the police riders have chased criminals, Murch said yes, and “we are capable of handcuffing from our horses or we could dismount — every situation is different. Typically, if we are chasing someone, other units are involved and handle the suspects once contained.”

The police officers ride daily, including in winter, said Murch, and even though the draft horses are at least 16-17 hands high, the officers must be able to mount from the ground.

“We have regular patrol in cruisers, motorcycle, mountain bike and we also have a ‘POP’ officer for ‘Problem Oriented Policing,’ and we do our own crime scene investigation but it isn’t so much a specific patrol,” concluded Murch.

Other communities that use horse patrols include Tempe, Ariz.; Willoughby Hills, Ohio; Mandeville, La.; Modesto, Calif.; and more than 100 other mounted units throughout North America. Also included are Tucson, Ariz., and other Western states whose mounted police units patrol the border over punishing ravines, hills and uneven territory. 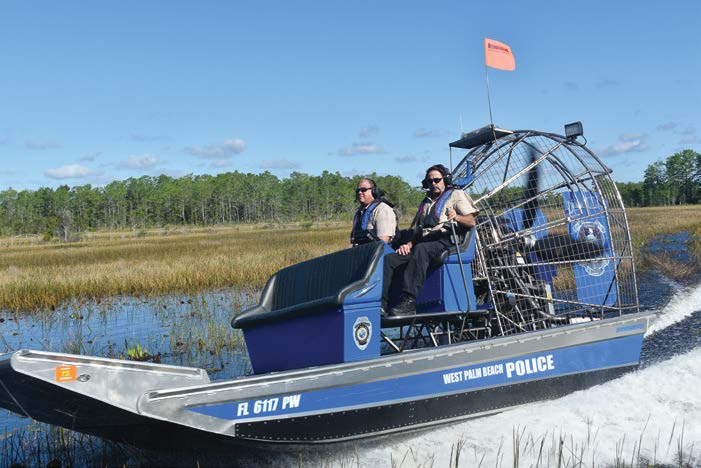 Taking to the waters

Some fleet vehicles reflect the environment that surrounds their respective cities. West Palm Beach, Fla., uses fanboats in its police division and so do other Florida jurisdictions that have waterways that need to be policed.

“The West Palm Beach Police Department has two airboats that have been in service since 1980,” said Laterese Abner, MBA, a certified instructor by the Department of Interior for the city of West Palm Beach and administrative assistant of the Field Operations Bureau.

“We use the airboats for patrolling the Grassy Waters Preserve, which is 23 square miles of wetlands and previously known as the upper headwaters of the Everglades. Grassy Waters is a surface watershed, which is used for city water for three municipalities.

The water is moved from Grassy Waters through a canal where it is treated and used for consumption.”

Airboats, however, can have accidents like any other mode of transportation, said Abner.

“In 2006 there was an incident during multiagency training,” Abner recalled. “While completing training, a deputy struck a tree and requested assistance from WPB police department. WPBPD responded, and it was after the boat slowed to assist when we were rear-ended by another agency boat.”

Meanwhile, in the state of Texas, the Harris County Sheriff ’s Office has purchased a $1.1 million boat to clean up chemical spills, according to Jason Spencer, the office’s spokesman.

“We have not yet received the boat, as it is under construction at this time, and target delivery for it is May 2019,” said Spencer.

The vessel will be the first of its kind in the Gulf of Mexico and is being built by the Washington shipbuilder, SAFE Boats International.

“This boat will make our Port Security Mission much easier on the Houston Ship Channel. It will not only protect its crew from toxic fumes but give them a vessel capable of sustained port security operations, including radiologic detection and response, interdiction, security escorts of vessels and security zone enforcement. This vessel has been designed with less than lethal force options built in as well as the ability to support underwater search-and-recovery operations. The range and capabilities of this vessel increases the response capability of the entire region; it will be capable of assisting in mass evacuation and search and rescue response, as well as tactical operations and command and control functions during incidents.

“The fleet of boats operated by the Harris County Sheriff ’s Office Homeland Security Bureau Marine Unit is managed by a highly skilled group of deputies that have received specialized training in port security operations and boat operations. The sheriff ’s office has fostered partnerships not only with federal and local agencies that have similar missions and interests but with Industry and other organizations as well. Those partnerships include the U.S. Coast Guard, Texas Parks and Wildlife, Port of Houston Authority, Houston Ship Channel Security District, private industry and others. This partnership between the private sector, industry, local, state and federal government agencies is truly unique and beneficial to this region.”

Last summer public works officials in Reed City, Mich., sold some of their outdated equipment, including an excavation attachment for a tractor and a utility truck, to make room for more useable items such as extra cemetery items, according to Ron Howell, city manager.

The city, which owns Woodland Cemetery, had purchased the excavation attachment in 2006 for a city council-owned tractor was found to be not large enough for grave digging and was only used once. The city’s replacements to its fleets included a new patrol car for the police department, a pumper-tanker for the fire department and an excavator for digging graves.

In Houston, Texas, it’s not so much the vehicles themselves that are a bit unusual, but rather it is the gadgets that are being added onto them.

Scott Packard, chief communications and public affairs officer of the Houston Health Department, is enthusiastic about a new program of mobile measuring air pollution that ran as a trial period in his department.

Installing air pollution sensors with telematics technologies on vehicles, such as animal control, waste management and public health, would turn up valuable information since the air pollution can vary greatly from one block to another. Utilizing these top-of-vehicle-mounted mobile sensors would allow a municipality to cover more territory and thus come up with remedies to manage or lessen air pollution. Smog, ozone, exhaust fumes and even the weather can play a part in deciding where to create a bike route, buy a house or where an asthmatic child can play in a park away from such ill air.

“The mobile air monitoring program was a pilot that ran for three months last summer,” said Packard. “During that time two of our Houston Health Department fleet vehicles were equipped with air monitors. Th ere are not currently any vehicles with the monitors.

“We hope to expand the program in the future. As is the nature with pilot programs, we’re evaluating the data and program and will use that information to prove the concept with the goal of ultimately seeking more funding to continue and expand the effort.”

Asked if the results were given weekly or monthly, Packard said that they collected data for the duration of the pilot program and then pulled it for analysis at the end of the three-month period.

“However, the goal of the program, were it to continue or expand, is to have real-time data,” said Packard. “Since this was a pilot program, the intent was to gather data and evaluate the program to determine if it’s something we would pursue continuing and expanding.

The mobile approach gave us data from areas that are not typically monitored at the ground level. So, we feel the data and program are valuable and have hopes of continuing and expanding it in the future.”

A study from Geotab and the Environmental Defense Fund showed that combining mobile air quality sensors with telematics technologies, city vehicles could measure air pollution going on their regular itinerary.