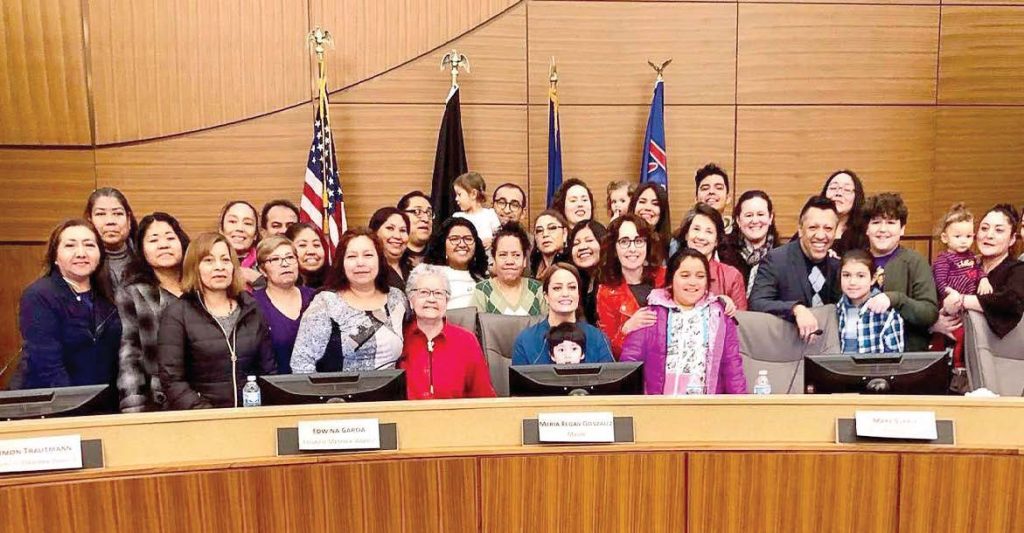 Marie Regan Gonzalez, the new mayor of Richfield, Minn., poses with members of the community as she sits in her new chair. She is the first Latina mayor in Minnesota history. (Photo provided)

2018 was coined the “Year of the Women” due to the record number of high-profile midterm races that resulted in the election of a wave of female candidates. The path to city hall was no exception, with more women taking the helm in municipalities large and small.

Marie Regan Gonzalez is among those fresh faces, and she’s ready to tackle the challenges of her town head-on. The 33-year-old was elected as the mayor of Richfield, Minn., in November, becoming the first Latina mayor in Minnesota history. Richfield, which has a population of about 36,000, is a suburb of Minneapolis.

Gonzalez had previously served on the city council and decided to run for mayor after incumbent Pat Elliott announced he wouldn’t seek re-election. She ran opposed but still ran a “full campaign,” as she put it.

“So, before I ran for office, I worked for the city,” she said. “I fell in love with the community and decided to buy my first home here.”

In other words, she felt a strong connection with the constituents. Her time serving on city council was especially formative, she said.

“I loved my work on city council and working with the (city) staff to bring amenities to our community,” she said. “I thought the position of mayor would be an extension of that.”

Just like she rallied behind the community, they showed up for her. Fortunately, she said the gender factor was not a dominant theme in talks with residents. She said she experienced “minimal comments” regarding her age. Instead, the general attitude was that people were excited to see a young person stepping up to the plate.

On the campaign trail, she said it was about using an authentic and grassroots approach.

“The most important thing is connecting with folks directly,” she said. “You really find a lot of commonality.

Now that she’s in office, she’s busy translating constituent feedback into action at city hall. For example, Richfield is going through what she referred to as “a time of transformative growth.” Redevelopment will be key in ensuring it maintains its identity, character and affordable nature, among other things.

Speaking of identity, she’s aware that’s broken some barriers as a Latina woman. Her advice to other nontraditional candidates: “Be yourself. Run as yourself. Lead as yourself. You won’t be happy if you aren’t authentic.”

Sally Russell, the first elected female mayor of Bend, Ore., is another trailblazer — although she doesn’t necessarily identify as one. In November, she defeated city council member Bill Moseley. Russell herself had served on Bend’s city council since 2012.

“I don’t see myself in politics,” she said. “I really have always been committed to the community and making it the best it could be.”

Call it what you will, but right now that means ensuring her beloved Bend is a well-oiled machine. A combination of rustic and up-and-coming, Bend’s natural resources, budding arts and cultural scene and affordable housing stock has attracted people of all ages in recent years.

An old mill town, Bend, Ore., lacks infrastructure like fully completed sidewalks and transportation, something that is on Mayor Russell’s radar. Pictured is an aerial view of the Old Mill District. (Shutterstock.com) 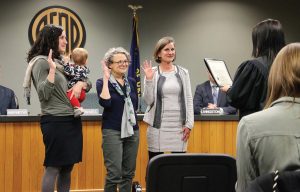 If you ask Russell, there’s something for everyone here. It was her passion for the Oregon city that gave her the energy and inspiration to run in the first place. She described the decision to run as a “thoughtful process” that led her to where she is today.

A problem-solver by nature, she’s leaning into challenges and opportunities largely driven by the growth of the town.

“We’re growing quietly,” she said, noting that the rise of telecommuting means people can live wherever. They are seeking out Bend because of its lifestyle appeal.

Still, she said there’s work to be done. For example, she said Bend is an old mill town, which means it’s lacking in infrastructure like fully completed sidewalks and transportation. Homelessness is also on her radar.

While she’s dove in head first, she’s aware that she’s an outsider in a way, being a woman.

“I hope they look at me as a colleague and through the lens of people not gender,” she said about her male peers.

Ultimately, she said showing up and collaborating is going to position any candidate, regardless of background, for success.

“A large part of the reason I’m mayor is the fact that I worked so hard with different corners of the community.” 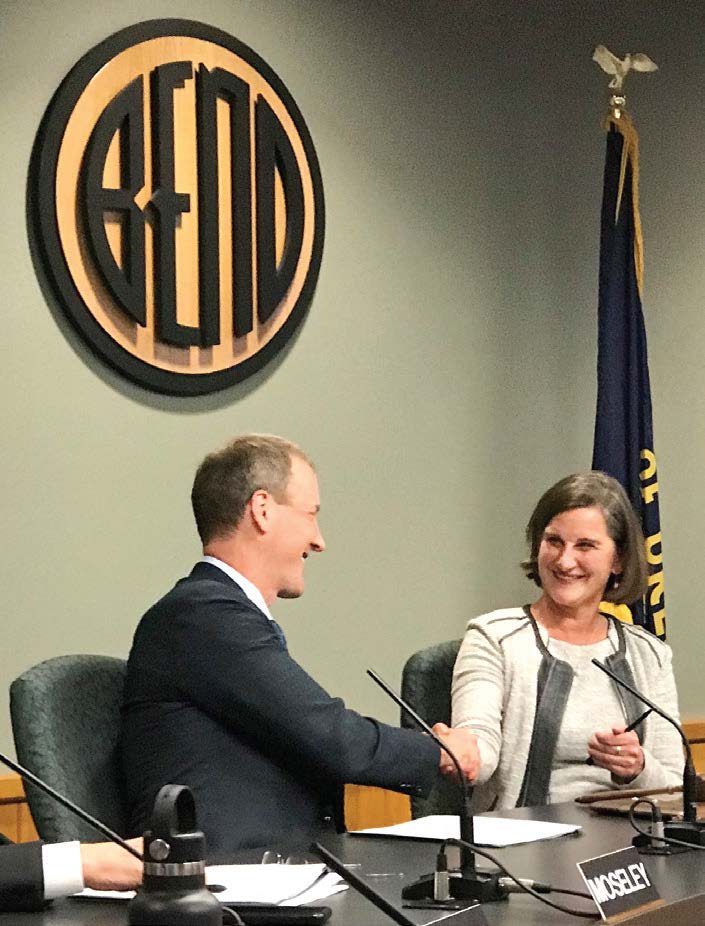