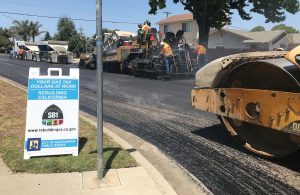 Santa Maria Public Works employees pave a street as part of the city’s efforts to better grade and maintain its roads. (Photo provided) 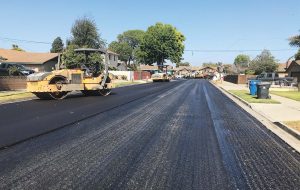 Once the initial grading is complete, roads will be regraded every two to four years. (Photo provided)

Ask any city mayor and they’ll tell you that the most diabolical enemy of their citizens is a pothole.

While a small portion of a mayor’s job, road upkeep impacts how constituents perceive their quality of life — the fewer potholes, the more positive people see their city and mayor.

But how does a mayor or a city official decide which streets are the most important and cost-effective to repair? Most will rely on intel from their road crews, but that can cause certain streets to be overlooked or forgotten.

That is why the officials of the city of Santa Maria, Calif., decided to invest in a new program called StreetSaver, to grade and better maintain its roads.

“I’ve been working with one of our other engineers to try to move our pavement management program forward,” said Roger Olds, the principal civil engineer for Santa Maria. “For many years, as a city, we basically had three major tools in our toolbox. We would do a chip seal. If it got beyond a chip seal, we would do an overlay. Then if it got beyond an overlay, we would do a full reconstruction, so nothing in the middle.

“Now we’re working on trying to utilize StreetSaver to make better decisions and to try to employ some other in-between pavement (maintenance) strategies to try to stretch our dollar.”

According to StreetSaver’s website, 300 public and private institution throughout the world currently utilize StreetSaver software to make more informed and timely decisions when it comes to roads. This includes the city of Seattle, Stanford University and several cities and counties in the greater San Francisco area. The program helps them to judiciously manage maintenance by diagonalizing pavement issues and prioritize repairs — all in a more cost-effective manner.

Currently, Santa Maria is in the process of grading all of its roads on what is called a pavement condition index, where each section of a street is given a number between 100 and one, with 100 being perfect condition.

To make this determination, 100-foot sections of a road are analyzed. The evaluator will physically get out of their vehicle and measure the size of pavement creaks, look for weather damage and more. All of this is entered into StreetSaver, which then determines the overall pavement condition index of that road section.

“The database tracks all of the different sections that you’ve cataloged,” said Eric Riddiough, a senior city engineer with Santa Maria. “And then it gives you a weighted average for the whole city.”

To evaluate its roads, the city is working with a company based in California called Pavement Engineering Inc. Once the initial grading is complete, roads will need to be regraded every two to four years, depending on how frequently they’re used.

Santa Maria is in the process of grading all of its roads, using the pavement condition index. To better track conditions, it has enlisted the help of StreetSaver and Pavement Engineering Inc. (Photo provided)

Santa Maria has owned the StreetSaver software since 2014, but this will be the first time the city has been able to fully take advantage of it.

“This is new effort that we’re making. We’re getting the (streets rated) and having PEI help. It is really going to help us fully utilize all the elements of StreetSaver,” Olds said. “Prior to now, we had purchased the product, but we weren’t taking advantage of it. It’s like you have a Cadillac with all the different bells and whistles and we’ve only been driving it. We haven’t really been using all the fancy tools and now that we’re getting fully up to speed.”

Some of StreetSaver’s “bells and whistles” include a GIS component, where a map can be generated to help a Santa Maria visualize its data.

Once all of the streets are graded, the pavement condition index can be used to determine what road to do maintenance on. It will also help determine the most cost-effective treatment for a road, which should make sure that a road stays in good condition for a longer amount of time.

“When it comes to StreetSaver, the initial investment is huge, but the amount of information and the tools it gives you certainly will help, especially this day and age,” Riddiough said. “When you go to your city council for approval or to get funding, you know you can show why certain roads need to be fixed because you’ve done the work and you know all the information.”