A newer trend seen in some municipalities is the process of leasing fleet vehicles as opposed to purchasing them. Cities decide to lease for a variety of reasons.

For the city of Rockford, Ill., its leasing initiative was born from necessity. As the city “went through a major budget cost reduction initiative,” according to Carrie Hagerty, financial director, outside consultants were brought in to see where money could be saved. One of the first things the consultants noticed was the size of Rockford’s fleet and the maintenance costs associated with it.

“We ended up having a replacement vehicle for every front-line vehicle because the front-line vehicles were unreliable,” Hagerty explained. Since its replacement needs were so substantial, the council approved a four-year leasing initiative to begin replacing fleet vehicles. In the first year, fleet replacement costs totaled over $10 million.

“It allowed us to actually start replacing vehicles,” Hagerty stated. They replaced fire trucks; squad car; ambulances; heavy equipment such as snowplows; sedans; and trucks. Anything that is maintained by the city’s garage is purchased through its leasing plan. A byproduct of this was a large increase in employee morale. “We are giving employees the appropriate tools they need to get their job done,” she commented. Employees are happier knowing they have safe, reliable, modern equipment to work with.

Due to budget constraints, the leasing program was discontinued for a few years; however, city officials feared they would again end up with a large fleet of unreliable vehicles.There were a few 2003 and 2008 vehicles with significant mileage, for example, that had not been replaced in the first wave of leasing. This led the city council to approve a continuation of Rockford’s leasing replacement plan in 2018.

Leasing contracts were awarded on a competitive basis so the city was consistently getting the best interest rate; however, this led to different leases being held at different banks. The city has since chosen to have a master lease agreement through only one bank, PNC Bank. Th e master lease agreement also allows the city to lease vehicles without having a public notice each time.

Since this was still a new approach to fleet replacement, Hagerty commented, “It felt like we were blazing a trail with this.” Not having the benefits of learning from another city, the city of Rockford had to come together to “make sure all the balls stay in the air.” This meant working with various departments, banks and sellers as it figured out the best processes as it went.

Hagerty recommended having a good process planned out, proper approval, proper documents, a system set up for payments and a plan for vehicle procurement. Titling vehicles properly was also a surprisingly difficult process and the city is just now “getting the process start to finish locked down.” She urged municipalities that are considering this route to reach out to other communities for tips and advice.

Currently, with its leasing plan, Rockford is paying approximately $3 million a year for all the replacement vehicles combined. Hagerty concluded, “Municipal leases have been a great sort of salvation for us to get our fleet vehicles and work within our budget constraints.” 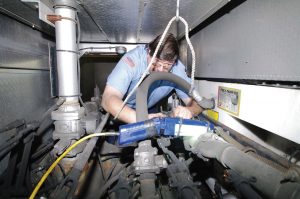 The need for replacing fleet vehicles in Rockford, Ill., had become so substantial that choosing to lease became a necessity. The city had backup vehicles for each of its front-line vehicles since they were unreliable and frequently needed repair. Pictured is Dave DeCarlo working on a fire engine prior to the city choosing to lease. (Photo provided by the city of Rockford, Ill.) 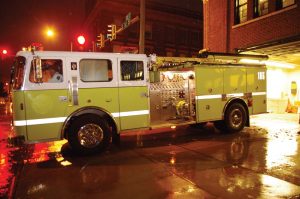 At times the city of Rockford, Ill., would have to buy used equipment from neighboring cities, which put it at, what Carrie Hagerty described as, “a crisis level.” This also led to nicknaming the Rockford fleet the “rainbow fleet” since there were so many different colored vehicles from different towns. (Photo provided by the city of Rockford, Ill.) 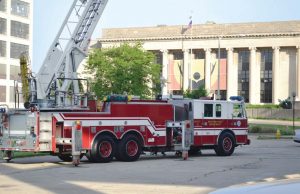 As the leasing plan continues, Rockford, Ill., is most concerned with watching interest rates to ensure that leasing continues to be the best option. Leasing has allowed the city to continue the necessary replacement of fleet vehicles, including this new ladder truck. (Photo provided by the city of Rockford, Ill.) 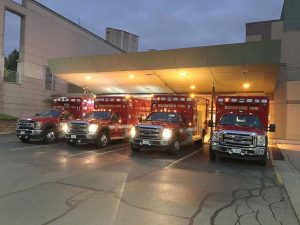 With the leasing arrangement in place, Rockford, Ill., was able to get new ambulances as well as a number of other vehicles. The first year, the city spent over $10 million replacing fleet vehicles. (Photo provided by the city of Rockford, Ill.) 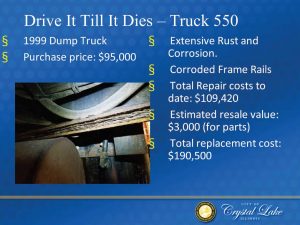 Using the example of a 1999 dump truck, the city of Crystal Lake, Ill., chose to begin leasing its fleet vehicles. Having purchased the dump truck for $95,000, the estimated resale value was only $3,000 due to extensive rust and corrosion. It would cost $190,500 to replace the dump truck after the city had already spent $109,420 repairing the truck. Leasing became the most costefficient option as opposed to spending more money repairing a vehicle. (Photo provided by the city of Crystal Lake, Ill.) 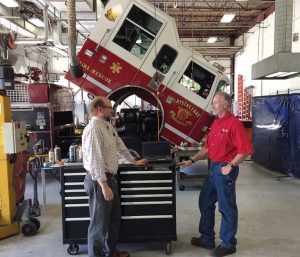 Since the city owns and maintains 326 vehicles and other pieces of equipment, its primary goal is to ensure that the vehicles are safe, reliable and perform their necessary functions. Pictured are Michael Magnuson, left, director of public works, and Don Christenson, fleet and facility services superintendent. (Photo provided by the city of Crystal Lake, Ill.)

When it came to reworking the way Crystal Lake, Ill., replaced its municipal fleet vehicles, the town did its research to determine the best and most cost-effective method. George Koczwara, Crystal Lake’s financial director, discussed the research and preparation that went into the city’s decision to lease its fleet vehicles.

The method the city was using, which Koczwara now calls “capital triage,” was becoming ineffective. “Capital triage wasn’t working and maintenance costs were going through the roof and vehicles weren’t available when we needed them,” he explained.

Research led to the proposition of leasing fleet vehicles.

The city council proposal explains, “The city currently has a fleet of vehicles of varying ages, many beyond their useful lives and capabilities, which has caused staff to reexamine our procurement practices and consider the benefits of fleet leasing.” As financial director, Koczwara also stressed the importance of a lifecycle cost analysis method for vehicle replacement.

For Crystal Lake, the benefits of leasing were substantial. After a cost analysis, it was determined that leasing would increase cash flow. The proposal shared the staff’s findings after comparing purchasing and leasing: “The net cost for the purchase of the fleet is estimated to be $19,565,653 whereas the net cost of the leasing of the fleet is estimated to be $17,783,390.” It goes on to state, “This will result in an estimated $1,519,896 savings in maintenance costs over the course of a 15-year program.”

Maintenance costs will be reduced since the city will follow an optimal vehicle replacement schedule. With 54 out of the 116 vehicles to be replaced having bumper to bumper coverage, repair costs will also decrease.

Koczwara described how the city would also be able to utilize a computerized information management system that would monitor and document preventative maintenance and repairs for fleet vehicles.

Partnering with Enterprise, the city receives increased fleet management support, which includes more buying power; fleet maintenance reminders and recommendations; assistance with insurance claims and repair; and assistance with routine administrative tasks such as license renewals. Once the vehicle’s lease is up, Enterprise sends the vehicle to auction and the city takes the depreciation risk. Residual money from the vehicle’s sale at auction then goes toward the city’s next lease.

The majority of fleet vehicle leases are for five years except for police pursuit vehicles, which are three-year leases. Koczwara also explained that the city has the option to renew its leasing program for an additional five years. Ambulances and fire trucks are not currently included in its leasing.

There is only one current challenge that Koczwara and Crystal Lake face and that is the wait time, specifically for vehicles that need outfitting. “A challenge is the delay on dump truck orders,” he admitted, which is something the city crucially needs.

An initial five-year leasing agreement was approved by the city council on May 1, 2018. The city is responsible for determining how many vehicles will be acquired through the lease annually and including it in the annual budget approval. “We have a more holistic view of our entire fleet and it’s working really well,” Koczwara commented, adding, “It’s a win-win for everyone. The city will have fleet vehicles that work. Local shop will get the work.”

Christopher Lyon, NTEA’s director of fleet relations, stated, “Leasing can be beneficial if capital is not available to replace aging vehicles. It also allows fleets to have new vehicles every few years.” Besides capital costs, leasing a fleet vehicle can also be beneficial for a city since, as Lyon stated, “Many vocational trucks are specialized and often have a longer life cycle length than traditional cars or trucks.”

However, he also mentioned challenges similar to what Koczwara shared, “Vocational trucks, since specialized and often custom-designed, sometimes require longer lead times and special lease terms.” Lyon continued, “Lease companies pay strict attention to depreciation costs, and as a result, those costs are embedded in the lease rate. The net effect for cities is that the lease rate for any given vehicle may be higher than an internally funded direct purchase.”