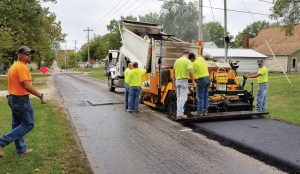 Pictured is Illinois Street, which was the major in-house complete rebuild. It was completed in 2018. (Photo provided) 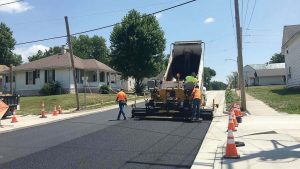 This is the first asphalt Kirksville, Mo., laid on a street from its own asphalt mixing plant. (Photo provided)

Kirksville, Mo., a rural city in Benton Township with a population of 17,536, serves as the county seat of Adair County. For years it had contracted out for the laying of asphalt, including for repairs.

One day in 2016, Ray Sandstrom, street superintendent of Kirksville, approached his boss, public works Director Glenn Balliew, with an incredulous proposal: Why doesn’t the city buy its own asphalt mixing plant instead of shelling out significantly more money that could be used for other more pressing endeavors? Wouldn’t the savings be substantial?

Balliew, true to form, put on his Missouri state “Show-Me” demeanor but allowed Sandstrom to form a task force to explore the idea.

Meanwhile, an old asphalt batch plant was already located in Kirksville but seldom operated — why? This sparked an idea, however. Since it was already in existence, why not develop it into service?

“The old batch plant is privately owned,” explained Balliew. “The city only purchased asphalt from that plant and could not plan projects because the plant seldom ran, would not provide asphalt when we needed it and the quality of the asphalt was questionable at times.”

As to why, Kirksville took on this enterprise, Balliew noted the city’s street infrastructure was failing at an alarming rate. The city had an outside company perform a complete study of every street in the community to include budget recommendations. The study indicated that the overall street pavement condition index was 57 and streets were severely underfunded.

“Funding for streets is tough because streets are nonrevenue generating,” said Balliew. “The city street budget had not seen a significant increase for almost 30 years until the citizens voted to permanently extend an economic development sales tax that added $600,000 to the street budget beginning in 2019. Adding a street construction crew to the staff and buying an asphalt plant was a bold move. The plan is to find efficiencies that would allow the city to do more with the funding provided by the taxpayers. The city can rehabilitate neighborhoods and repair drainage at a huge reduction in cost, and contractors can rehabilitate major streets that require more manpower. In 2019, the city expects to rehabilitate more than 7 miles of streets; this is the most that has been rehabilitated in a single season in more than 20 years.

“With the cost savings, the asphalt plant will pay for itself in five years or less. In 2018 the city saw a cost savings of more than $1.5 million over engineering estimates on a single street. This particular street was a complete rebuild and affordable using correct annual budget amounts. Based on engineering estimates, it would have taken the entire street budget for more than two years to rebuild this street. Federal and state prevailing wage rates drive up contract cost that results in less work being accomplished with the funds provided. Using the city construction crews and making our own asphalt results in an estimated 60 percent reduction in cost on this project. That is huge.”

Also, partnering with the civil and environmental engineering department of the University of Missouri, 92 miles away in Columbia, was a game changer. The university’s Missouri Asphalt Pavement and Innovation Lab experimented with finding the best possible asphalt mix for Kirksville’s plant.

Asked if there was any opposition to creating the new plant, Balliew stated that this was a difficult fight because the city was losing more streets annually than they were repairing.

“Something had to change,” admitted Balliew.

He added, “The public works department didn’t arbitrarily decide to just build an asphalt plant. We conducted two solid years of research before putting it in the budget and defending it. Being able to control the quality of the asphalt; producing it as a 40 percent to 60 percent reduction in cost; and, furthermore, getting it exactly when we needed it was key to our success. We felt confident that the plan would help in getting our street infrastructure back to acceptable levels and putting us on a 15-year rehabilitation plan. We also understood that citizens would want to see progress. We ran the numbers and conducted the analysis and were confident that this was the right thing to do. I felt assured that it would work and we went for it.”

Regional and local contractors voiced opposition to the idea, which they didn’t like at all. They didn’t realize that through the in-house construction and creation of the asphalt plant they would be getting as much, if not more, work as they had in the past. This was a result of the city’s goal to repair even more streets.

“We actually erected the plant in-house to save money,” said Balliew. “The street division performed the site prep; built the footers; hired cranes; erected the plant; managed all utilities; pulled wires; provided the manpower for hookups and controls; and calibrated the plant.”

Other purchases included the asphalt drum mixers unit, which produces up to 110 tons an hour of two kinds of asphalt paving material; a slipform curb machine; GPS surveying equipment for the street division; a small LeeBoy asphalt paver; and a tractor-trailer truck to haul limestone from a quarry. A Wirtgen asphalt milling machine is sporadically leased for the preparation of streets for new pavement.

Balliew and his crew could not locate another city of Kirksville’s size from which to model their asphalt plant off.

“They may be out there, but we couldn’t find them,” said Balliew. “This was a new concept, but something had to change. We hope that other cities can use our lessons learned if they are considering building their own streets.”

As far as reactions to the plant, Balliew noted there were citizens and city leader both for and against it.

“Most citizens were behind the idea,” said Balliew. “They understood that change was necessary. After numerous briefings, newspaper articles and local press interviews, more got on board. With the progress seen from the first year of operations, the asphalt plant is poised to make a huge difference in the coming years. As mentioned previously, the city will rehabilitate more streets in only the second full year of operations than has been done for more than 20 years in a single season. Progress speaks for itself.”

Mari Macomber, Kirksville city manager, is happy about the endeavor for two reasons.

“First, I like having the ability to schedule and know that we are going to get a quality product,” said Macomber. “The second is the capability to use the product in other applications that we hadn’t thought about, such as parking lots and trails.”

Sandstrom wouldn’t do anything differently if he had to do the project over.

“To those cities considering building their own asphalt plant, keep in mind that we did a tremendous amount of research before ultimately deciding that building our own plant was the way to go,” concluded Sandstrom. “We no longer have to depend on other plants that might not have the quality of asphalt we have or the reliability of delivering it when we need it.”