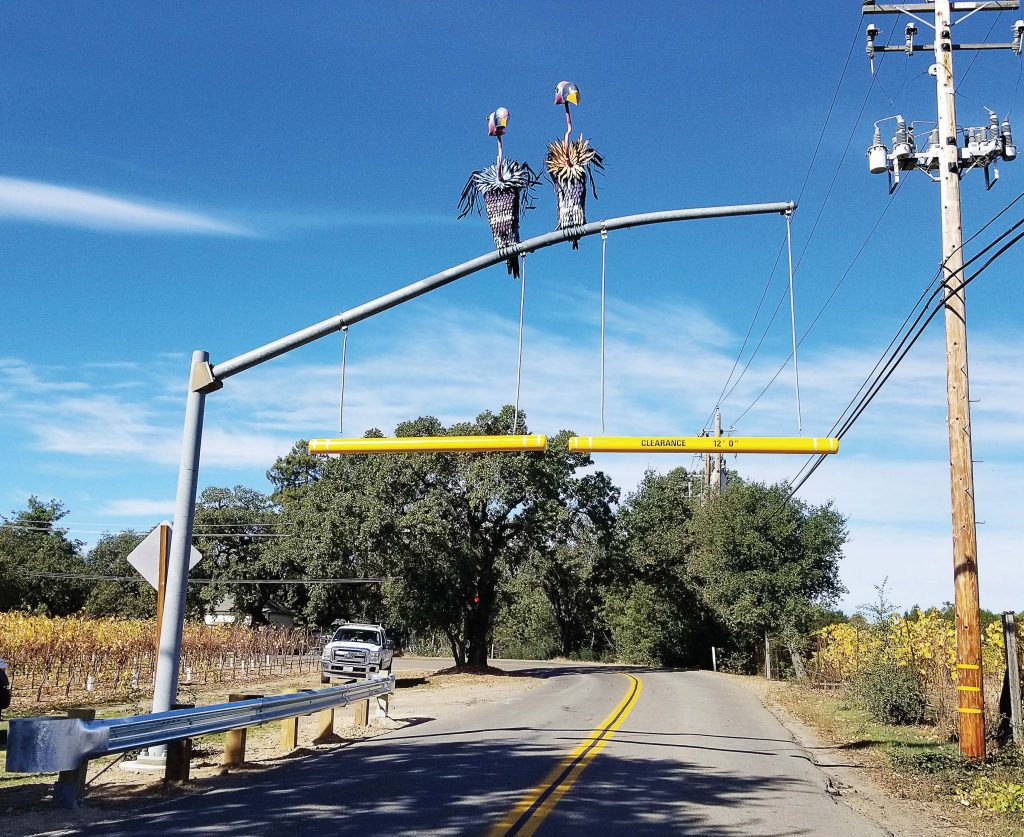 The vulture sculptures in Sonoma County,
Calif., were designed and created by a
local artist who had free range as long as
it met the structural engineering and code
requirements. (Photo provided)

Art can create and transform a city’s identity or revive it by drawing in the eyes of visitors. It gives residents a sense of home and culture that is unique to them and memorable to others. It can solve issues like vandalism and crime while looking good doing it.

As cities implement art, they’re discovering more practical uses with each program and cultivating a closer connection with their community in the process.

While art is beautiful to observe, it serves a practical purpose. Cities across the world have created interesting crosswalks to make pedestrians and drivers pay attention.

Large installments — like “Cloud Gate,” fondly called “The Bean” in Chicago — have become a tourist attractions and a symbols of identity. Art has always been used as a way to define a city, and now more cities are also viewing it as a way to resolve problems.

In Sonoma County, Calif., on Laughlin Road, sit two metal vultures, awaiting their prey. At 7 feet tall, they’re perched atop a yellow clearance boom as a warning to semi-truck drivers about limits.

The sculptures came from a constant problem of truck drivers ignoring flags and size limit signs, resulting in damages that create road closures that wouldn’t only inconvenience residents but cost time and resources for them and the county.

This kind of artistic warning sign is common across Europe, but Sonoma

County believes it is a forerunner in the U.S.

“We’re pleased to be a potential national model for how to implement effective traffic solutions that mix art and engineering in creative ways to enhance safety in transportation in corridors,” commented Johannes Hoevertsz, director of the department of transportation and public works. “We welcome opportunities to help solve ongoing issues and improve transportation-related projects by mixing art and engineering in ways that can meet state and federal standards and are unique to Sonoma County and its communities.”

There haven’t been any incidents since the sculpture installation in late 2018, to the delight of Sonoma County. While it brought more awareness to the issue, the installation also generated positive attention from the public and media.

Hoevertsz advised, “It’s important to identify and work with appropriate departments, agencies and local nonprofits dedicated to the arts to find willing and qualified artists and advocates. Also identify local elected officials who will support and help facilitate the project.” 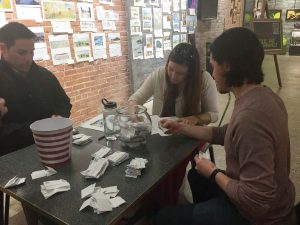 Through a partnership between the artists’ guild and the city, Casper has installed a people’s art choice on its traffic signal boxes. The guild puts the pieces on display during an art show, giving people the chance to vote. (Photo provided) 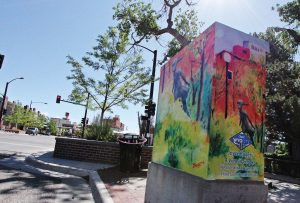 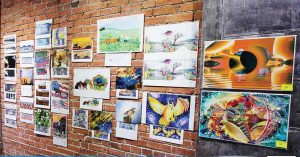 In partnering with local artists and art groups, municipalities stand a better chance of having their projects heard and gathering art submissions. According to Beth Andress, Casper, Wyo., the broader the theme was the more submissions they received. (Photo provided)

All about the vinyl

In Casper, Wyo., the city is combating vandalism through beautification — specifically covering the traffic signal cabinets in art. This may not be unique to other cities, but utilizing vinyl wrap is a new twist.

Using vinyl not only saves time for the artists and the city, it is also easy to install. In 2018, the project was budgeted for $3,000 but cost $2,800 in total, which included installation, printing and paying the artists. Every year five art submission winners’ pieces cover the boxes.

“The technology has gotten less expensive. Vinyl is resilient, washable and replaceable. Our local company gives us a good deal for the wraps,” informed Beth Andress, Casper’s beautification coordinator.

“Public art doesn’t have to be a $50,000 mural and the artists don’t have to be out there for five days, painting it on the box. It takes less of their time and our time.

“This makes the intersections more interesting. Since the wraps went up, they haven’t been graffitied. Even if they were, our traffic department would have an easier time cleaning it up, and we could easily print the art again. You wouldn’t have to call the artist to have them touch it up.”

Despite a municipality having a myriad of people and ways to communicate, partnering with Casper Artists’ Guild was the best step to make it all happen, according to Andress. The guild was able to speak with local artists and had access to them in ways the city didn’t, which proved helpful and beneficial for all parties.

“It’s about picking the right partners who will give you credit. Originally, we were going to do it ourselves, but people weren’t going to pay attention to us. We’re not a local artist place. We don’t talk to them on a regular basis. I don’t think this would’ve been successful if there wasn’t a partnership.”

Andress recalled a 96-year-old artist who had been a winner and had only heard of the program through the guild as it was the place she visited regularly. The guild also hosts art shows, which gives the public a chance to vote on one art piece they’d like to win while also giving artists the opportunity to show their work to friends and family.

Casper has seen a decrease in graffiti and vandalism since art installations.

“We’ve also done four murals. The way we do art is really about graffiti and vandalism,” Andress explained. “Art locations are picked purely where we own the wall and box, and where it’s being graffitied. I think this is a better way than putting up cameras.

“As beautification people, we get stuck in a hole where we think this needs to be professional, cost a lot of money and take all summer long. But these murals were small and cost between $2,000-$10,000. A lot of times the group I work with is AmeriCorps., and they write a grant to pay the artist.”

Andress added, “Go for it, but start small. If you get too grandiose, you set yourself up for failure. Start small, get the right players, get a couple local artist groups on the board and then see what they say.” 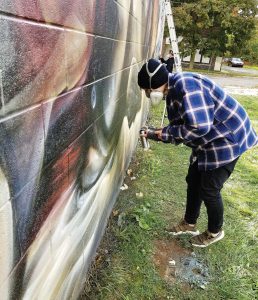 Totem Books, the most recent mural site in Flint, Mich., is only one painted section of the city and has brought countless visitors already. Local and national artists have visited Flint to partake in the public art projects. (Photo provided) 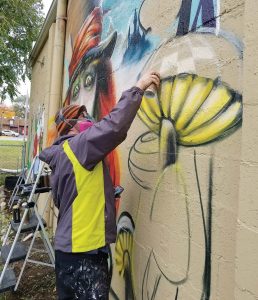 Murals around Flint have depicted inspirational settings, poetry and abstract forms of artwork to beautify abandoned houses and blighted buildings that would otherwise be eyesores. (Photo provided)

Flint Public Arts Project set out years ago to rejuvenate the city and its history of murals in Flint, Mich. After receiving negative press from the water crisis, artists and various nonprofit organizations banded together to display the city’s culture and shine positivity on the city.

Joseph Schipani, former executive director of Amplifier, which FPAP was originally a part of, shared the one example of murals changing the perception of Flint was in 2012. An old run-down building that attracted drug dealing and prostitution prompted a neighborhood to ask about an artistic solution.

“If we put big murals on it, that’d make people want to stop, take pictures and look around. That might make these people not want to come around and do illegal activities then,” Schipani shared. “We covered the building with murals, like an outdoor gallery. The crime went away almost immediately.”

Along with deterring crime and serving as beautification, some of the public art projects focus on promoting local businesses. The most recently completed project was on the walls of a local bookstore located on the outskirts of the downtown area. It catches the eyes of people who would otherwise drive past the business and has become an attraction for visitors.

With the water crisis taking up most financial and philanthropic investments, resources have been lacking when it comes to generating art. According to Schipani, “Getting funded on a local level is difficult, and then it’s harder to get funded on a national level when there’s no support on the local level.”

Nonetheless, Schipani and Flint residents see this as a turning point for the city.

“People come to cities to check out art and culture — they like to live where there’s art and culture. The more of that we have, the more beautiful things we have to look at. People are going to recognize that. If we keep creating art, it’ll spark more business and having more people moving here to become a part of it. It can revive almost abandoned cities.”