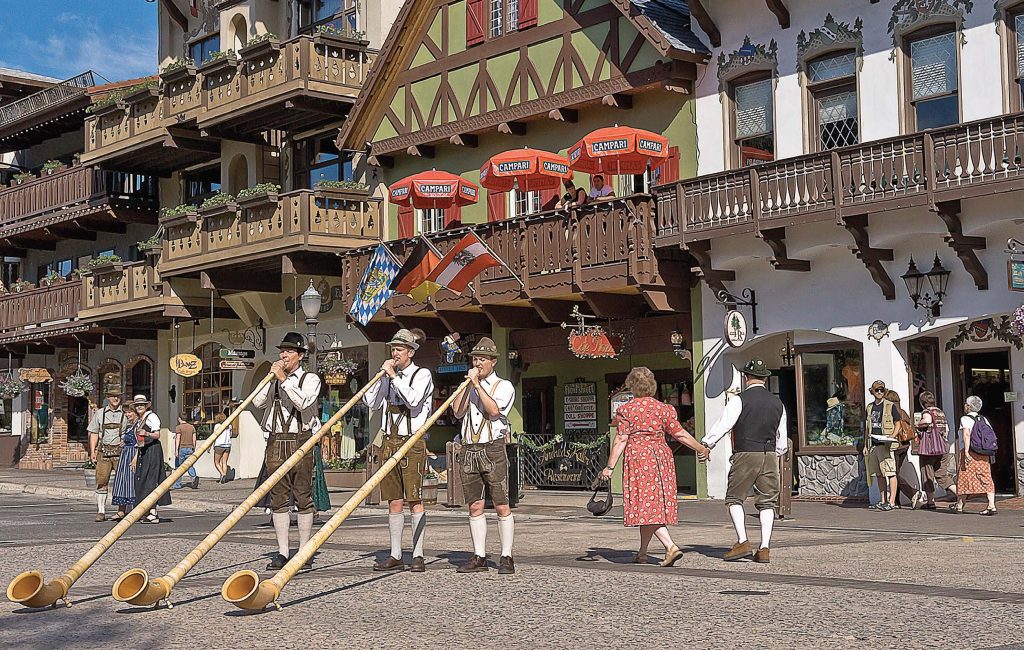 The robust blasts of traditional alpenhorns are a familiar sound in downtown Leavenworth during tourist season. (Photo courtesy of Icicle TV)

With apologies to Plato and Frank Zappa, sometimes necessity is the mother of reinvention.

In the 1930s, Leavenworth, a picturesque hamlet of 2,000 residents nestled in the Cascade Mountains, began to die. The tracks of Great Northern Railway Company, the town’s commercial lifeline for four decades, were rerouted and took with them jobs, industry and hope for the future.

The once robust local logging industry was decimated and the town’s sawmill closed. Merchants shuttered their shops. Some townspeople moved away, seeking a new life. The remainder hunkered down, resigned to a hardscrabble existence in a remote, insignificant community.

Leavenworth’s vitality slowly hemorrhaged until the early 1960s. Then everything changed.

Community leaders brainstormed ways to bring commerce back to town and scored an idea, inspired by the stunningly beautiful Cascades surrounding the town. They decided to turn the town into a charming Bavarian village to entice tourism, which has remained Leavenworth’s signal industry for six decades.

The entire community rallied to the cause. Intensive research was conducted; building facades received comprehensive makeovers, resulting in a townwide milieu rivaling a “Sound of Music” movie set; and building codes were rewritten to maintain the image.

Renovation began with the Chikamin Hotel, which was renamed the Edelweiss after Bavaria’s state flower.

Enterprising citizens crafted a year-round schedule of family-friendly festivals, including Maifest, featuring a maypole that towers more than three stories above the town square; Bavarian Icefest every Martin Luther King Jr. weekend; Kinderfest on the Fourth of July; Oktoberfest; Christkindlmarkt throughout Thanksgiving Day weekend; and one of the inaugural events, the three-weekend Christmas Lighting Festival.

According to www.cityofleavenworth.com, “The new plan worked.

Dancers revel around the maypole in the town square during Maifest, a German celebration celebrating the arrival of spring. The 2019 festival will be held Saturday and Sunday, May 11-12. (Photo courtesy of Icicle TV) 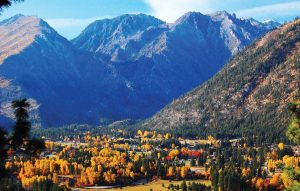 The majestic Cascade Mountains surrounding the town exhibit their unique beauty each season of the year. (Photo courtesy of Leavenworth Chamber of Commerce)

Ever since the change to a Bavarian motif, Leavenworth has become a pillar of the tourism industry in the Pacific Northwest … The story is a landmark case of human spirit: The people of Leavenworth not only survived their most critical hour, they endured.”

Jessica Stoller, media director for the town’s chamber of commerce, lauded the “dedication of a group of local business owners” responsible in large part for the village’s renaissance. “They were tenacious and scrappy enough to follow their dream of making Leavenworth a successful tourist destination. Obviously this dream was fulfilled and we are benefiting from those efforts today.

“We see more than 2.5 million visitors a year and we have seen strong growth year to year,” she said. Tourists have arrived from every state in the country and many nations around the globe. A few came and never left.

Visitors can enjoy international cuisine ranging from folksy to elegant, sip a variety of adult beverages at several brewpubs and distilleries, lodge in immaculate overnight accommodations, hike or bike nature trails and shoot a round of miniature golf on a bent grass championship hillside putting course beneath the languid gaze of disinterested mountain goats.

Leavenworth’s outdoor attractions are blessed with a resolutely collegial climate during tourist season. Rainfall is rare and every month from May to October has recorded zero precipitation at one time or another. In 2003, Leavenworth experienced a rainless streak of 114 days from June 15 to Oct. 6.

One of Leavenworth’s centerpiece attractions is the Nutcracker Museum, which opened its doors in 1995 and boasts more than 6,000 nutcrackers from around the world.

The museum has produced a 14-minute video on the history of nutcrackers; developed two educational websites about the museum, its displays and the nutritional value of nuts, www.nutcrackermuseum.com and www.kidslovenutcrackers.com; and published a coffee table book, “The Art and Character of Nutcrackers,” with photographs of more than 1,000 of the museum’s displayed items.