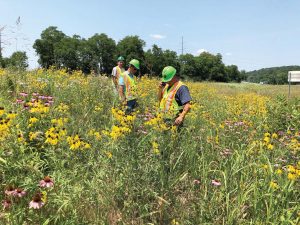 ODOT employees examine the health of the agency’s pollinator habitat located in the state-owned right of way along state Route 207 in Ross County. (Photo provided) 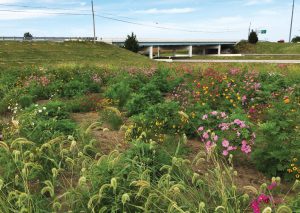 For its pollinator habitats, ODOT seeded a mixed variety of native prairie plant species, providing food specific for pollinators. This program has been well received by the public who enjoy seeing beautiful flowers while they drive. (Photo provided) 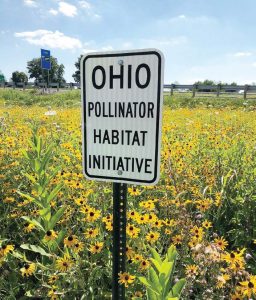 Milkweed is an important part of ODOT’s pollinator habitat as the agency hopes to bolster monarch butterfly numbers. Ohioans can help by harvesting milkweed pods and leaving them at milkweed pod collection stations. (Photo provided)

Pollinators, particularly the at-risk monarch butterfly species, play a critical role in our ecosystem. But what happens when infrastructure gets in the way?

Sometimes the results can be detrimental for life that depends on biodiversity. Monarchs cannot survive without milkweed; their caterpillars only eat milkweed plants. And further compounding the problem, monarch butterflies need milkweed to lay their eggs. With shifting land management practices, milkweed is an unwelcome guest.

An Ohio agency is challenging these norms, however. The Ohio Department of Transportation Office of Highway Maintenance is acknowledging the importance of pollinator habits with an innovative approach to site management. In the fall of 2013, ODOT District 9 initiated the Bee Pollinator Habitat Project. Under this program, ODOT workers converted state-owned right of way to pollinator habitat.

In the spring of 2014, maintenance staff prepped and planted two 1-acre plots along the SR 207 corridor in Ross County. Fast forward to today and ODOT is still focused on planting native prairie plant species to restore the habitat and provide food specific for pollinators.

Joel Hunt, the program administrator for the Highway Beautification and Pollinator Habitat Program, is charged with bringing this vision to reality. He said the current program builds on the momentum and experience from another successful pilot years ago.

“ODOT had a wild flower program in the ’90s,” he said. “We learned a lot of lessons, such as site prep as it relates to controlling weeds.”

Still, the area didn’t have as much wildlife as it does today, Hunt said, and it was expensive to maintain. So, the agency abandoned those efforts in 2011-12. It formed a partnership with  Pheasants Forever and converted its first site.

Today, ODOT works with about 80 conservation groups to do on-the-ground maintenance and outreach.

According to Hunt, ODOT’s efforts are rooted in what he calls a “scientific approach.”

For example, its seed mix is vetted by scientists to ensure it meets certain prescribed standards. It also applies a targeted herbicide that won’t harm the pollinators.

After four years, he said the agency has established protocols and now the practices are dialed in. Generally speaking, ODOT has committed to a variety in vegetation to “really benefit the ecosystem.”

Hunt said this new approach has also curbed the need for mowing Ohio’s 19,000 miles of roadsides, saving the agency time and money. Even without “full implementation,” he said the agency has saved an estimated $1.8 million in taxpayer money.

Plus public sentiment has been positive, too, as people seem to enjoy the aesthetics.

“Having natural vegetation and blooming flowers makes for a much more pleasant drive,” Hunt said.

But perhaps more importantly, ODOT and its partners have yielded results in the name of conservation.

“With mowing reduction, we have been able to create 80,000 acres of suitable habitat statewide,” he said.

Not only is ODOT doing less mowing, it is strategic about timing. For example, he said the agency plans its mowing schedule around the monarch’s migration patterns. In his words, “the monarch butterfly is what’s driving the bus.”

To that end, the agency has done its part to engage residents by asking them to harvest milkweed seed pods from established plants during the critical period of Sept. 1-Oct. 30. Most Ohio counties have a milkweed pod collection station, making it easy for Ohioans to do their part. Harvesting pods from milkweed plants does not have any effect on the population of milkweed in established areas.

Fourth-generation monarch butterflies hatch in Ohio in late summer, migrate north to Canada and then come back through Ohio once more in order to fly to Mexico for the winter. This same generation is also responsible for starting the life cycle all over again in the spring, laying the following year’s first generation of monarchs.

The stakes are high, with the monarch population waning. Ohio, being a highly agrarian economy, depends on pollinators for its livelihood, and the country as a whole looks to the Midwest for some of its food supply.

“If there are no pollinators, there’s no food,” he said.

Yet, according to Hunt’s data, the population of the monarch butterfly has declined by 80 percent. He points to culprits like urban sprawl and the use of pesticides. Milkweed has long been the enemy of maintenance staff, which has in part resulted in a decreasing monarch population.

If you ask Hunt, it doesn’t have to be a zero-sum game.

“Th ere’s a difference between naturalizing an area and ignoring it,” he said.

That’s why, going forward, his department is committed to embracing a winning combination of mowing reduction and targeted herbicide.