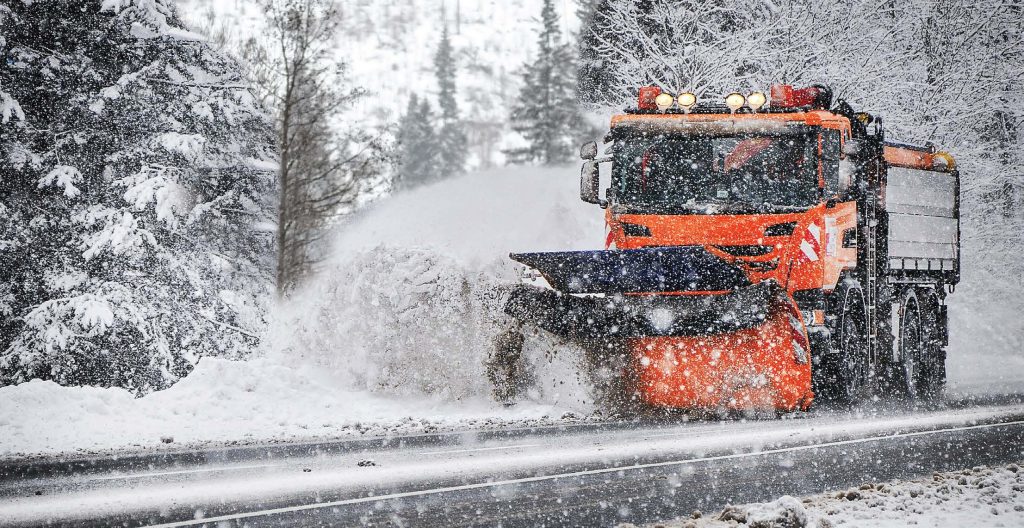 Keeping the roads clear for the approximately 170,000 people living in Fort Collins, Colo., is no easy task with an annual snowfall of 50 inches a year and 1,100 lane miles to plow. While the city typically has quite a few “sunshine days,” which prevent snow from piling up too much, Larry Schneider, streets superintendent, still has his work cut out for him.

“When I started here in the 1980s, we didn’t have much,” Schneider said. The department has grown over his 38 years with the city in part thanks to the operators who take pride in their jobs. There is a specific process for snow removal as soon as they discover snow is on its way.

“Once it starts snowing or we know it’s going to snow we call a pre-storm meeting,” he stated. The snow removal team, made up of multiple departments, meets at the snow command center to begin preparation. At the meeting its members go through a checklist on the weather forecast, personnel and materials.

In order to keep the snow from binding to the pavement, Schneider explained, “We typically anti-ice a day before the storm.” However, rain and wind directly before a snowstorm can make this impossible since it will simply wash away the anti-ice.

Plowing priorities are important with arterial roads coming first, then collector roads and finally minor collector roads. Residential roads are only plowed if there is 12 inches or more of snow on the ground. City-owned parking lots are also plowed.

“If it’s snowing right now we will have parking lots clear by morning,” he said. As a platinum bike community, “we put a lot of emphasis on plowing bike lanes.”

Two crews are in charge of plowing, working 12 hours on and 12 hours off. The crew team remains on the same shift for a while before rotating. There are 24 plow trucks and most are equipped with wing plows.

Depending on the storm and temperatures, the trucks will come and pick up different products from the liquid and granular mixes, though a granular mix is always used. “We call it shake and bake. The liquid goes to work right away and the granular works at it slowly,” Schneider explained. They also utilize a special anti-icing brine mixture, which helps to lower the corrosion rate unlike typical mixers. He commented, “The worst type of storm is one that is raining then turns to ice.”

These weather stations check the pavement temperature and the amount of friction. He explained that .82 is normal and .5 means the level of grip has decreased — or the road is getting slippery. The deicing facility is automated to track how much product comes in and how much goes out.

The city’s compressed natural gas fleet is composed of eight tandem plow trucks that work throughout the snowstorms to keep the streets safe for residents. Each truck has a cost of about $370,000. Throughout the city of Fort Collins, Colo., there are 59 compressed natural gas vehicles. This is a typical CNG truck with a wing plow and liquid tank. (Photo provided by the city of Fort Collins, Colo.)

Certain bridges also have automatic deicers. Roadway weather information systems track both the road and air temperatures to signal the sprayers to work. Live cameras that can be viewed from the command center are also at major intersections. Schneider said this is “really valuable because we can see what’s really going on out there.”

All plow trucks are equipped with automated vehicle location, which monitors the location of the truck, whether the plow is up or down and whether deicer is coming out the back. The city also prides itself on sharing this information with the community on its website so they can see which roads have been plowed.

Each year the city holds a two-day intensive training course the first week of October. Typically it will run about 100 city employees through the course, which includes both classes and written tests. The course discusses the use of sensible materials, maintaining environment sustainability, policies, hands-on driver training, mechanics and maintenance. Prior to snowfall, employees practice going through their assigned route as a team on one of the nine routes throughout the city.

The snow removal team coordinates with the department of transportation and the school districts to determine if school should have a late start or be cancelled. Updates are then provided to the community so people can plan for their day.

“The goal is to achieve bare pavement four hours after the storm stops and snow stops falling for arterials and in two hours for collectors,” Schneider said.

If there is enough snow in the downtown area, it has to be picked up using snow blowers, and the snow must then be loaded into trucks to haul to the snow dump site. Contractors are responsible for clearing the sidewalks and bus stops after a storm has ended.

The material storage facility for snow removal was an approximately 10 months long project. The cost of the project after completion was $3.2 million. The facility holds 10,000 tons and the tanks have a 230,000-gallon capacity. (Photo provided by the city of Fort Collins, Colo.) 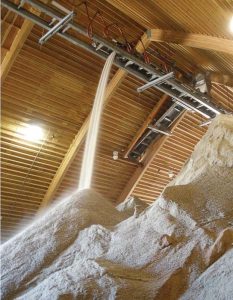 An inside view of the material storage facility, or “salt barn,” as it is fi lled with salt. The city has the capability of coating the salt with liquid product using the automated spray system. (Photo provided by the city of Fort Collins, Colo.)

This is the type of in-stream monitoring system used by Fort Collins, Colo., to practice sustainability. It monitors pressure to determine flow and conductivity to calculate chloride concentration. Individuals at Colorado State University check these monitors and then report the fi ndings back to the city. (Photo provided by the city of Fort Collins, Colo.) 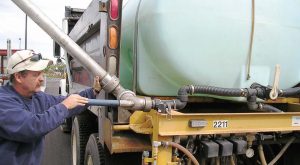