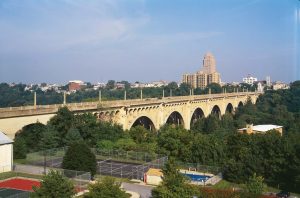 Opened to traffi c in 1913, Allentown, Pa.’s, Eighth Street Bridge has been the site of approximately 80 suicides. In 2014 during a planned renovation, fencing was added to the bridge to prevent suicides there. (Public domain) 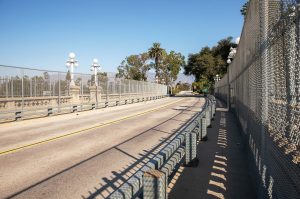 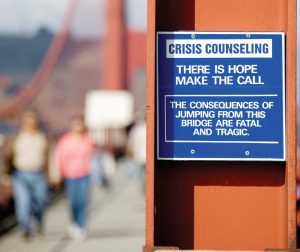 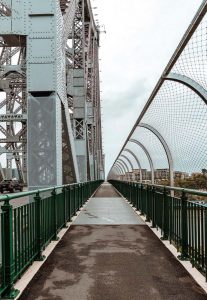 Researchers have learned that barriers have an impact on those acting in the heat of the moment. (Shutterstock.com)

When the Eighth Street Bridge opened for traffic on Nov. 17, 1913, in Allentown, Pa., it was the longest and highest concrete bridge in the world. At 2,650 feet in length, 45 feet in width and 138 feet high, the reinforced concrete, open-spandrel arch extended over the Little Lehigh Creek joining the city’s center area to its south side. On a daily basis, the Albertus L. Meyer Bridge — as it was formally named in 1974 — carries a traffic volume of nearly 17,000 vehicles, and in the century since its construction, it has also been the site of approximately 80 suicides.

Although they account for only 5 percent of all suicides in the U.S., “bridge jumpers” are a serious concern for communities whose structures are sought out by those desperate to end their lives and community leaders are determined to do something about it before more deaths occur.

“If we can make it harder for people to kill themselves, then they are less likely to commit that act,” said Rep. Mike Schlossberg, D-Lehigh.

The solution, according to advocates, is the installation of barriers along those bridges that have earned a reputation as a suicide “hot spot.” These include the iconic Golden Gate Bridge in San Francisco, where at least 1,600 people have leapt to their deaths since 1937; the Colorado Street Bridge in Pasadena, where 150 people have died since 1919 and the UT-202 overpass in Magna, Utah, where a man fell off the overpass and was hit by several vehicles traveling along I-80 in August 2018.

It is a solution that is not without controversy. Those who oppose the barriers argue that these fences often disrupt the aesthetics of a historical structure, they cost too much for the small number of lives that could potentially be saved and that preventative measures at one location will not stop someone from committing suicide elsewhere or by another means — a term known as “displacement.” And while there is some evidence to suggest that displacement can occur when someone is determined to kill themselves regardless of the obstacles in his or her way, researchers have learned that barriers have an impact on those acting in the heat of the moment.

“Suicides are on the rise and we are at a 50-year high,” said Schlossberg. “We are losing people annually, and if we can reduce access for those with impulsive suicidal thoughts, then perhaps we can get them the help that they need.”

Although suicidal jumps fall far behind incidents involving firearms, there is a correlation between the two. Individuals who choose one of these two methodologies are looking for the quickest and most lethal way of ending their lives. They don’t want to hesitate, because hesitation leads to second thoughts. A 2015 case study Michael Westerlund, Gergo Hadlaczky and Danuta Wasserman published by the British Journal of Psychiatry suggests that hesitation prior to a suicidal act means that the choice between life and death remains an open question until the end. The “to be or not to be” moment means there is still time to reconsider the choice and that’s where barriers come into play.

“It’s a small step, but it is an important step,” Schlossberg said.

While nothing will stop all incidents of suicide jumping, structural interventions at suicide hotspots can avert tragedies at these sites. Greg Marley, LCSW, clinical director and senior trainer with the National Association of Mental Illness, said 90 percent of those who were deterred by barriers — and seek out behavioral care — don’t repeat their suicidal attempt.

“Someone in suicidal crisis can be interrupted or slowed down so the moment passes and they can get beyond it,” he said. “It’s a combination of fencing and suicidal hotline signage. Help is available and that makes a difference.”

And communities have concluded that these fences are worth the cost. With an average of three suicides per year from 2007-2016, nine in 2017 and four as of August 2018, Pasadena City Manager Steve Mermell decided the time had come to take action. The city council approved $295,932 for a 10-foot, close weave mesh fence that is very difficult to climb.

The Eighth Street Bridge got its suicide barrier during a massive renovation to commemorate its 100th anniversary in 2014, but there is more work to be done. In 2017, Pennsylvania Sen. Gene Yaw proposed a bill for Pennsylvania Department of Transportation to erect protective fencing on new bridges and those undergoing repairs on interstate highways after a rock was thrown from an I-80 overpass.

The rock smashed through a car’s windshield and hit the driver, causing massive brain injuries and severe damage to one of her eyes.

Schlossberg took the bill further, adding an amendment that would require PennDOT to consider protective fencing to known suicide spots. The bill and its amendment passed unanimously and were signed into law by Gov. Tom Wolf in July 2018.

Schlossberg said he wishes every piece of legislation received the same level of bipartisan support that this bill garnered because there is still more to do and not all of it can be solved with infrastructure improvements.

“People need increased access to mental health care services and that requires funding so there is still more work to do, but this is an important step towards reducing the massive spike in suicides that we have seen over the past two decades,” he said.