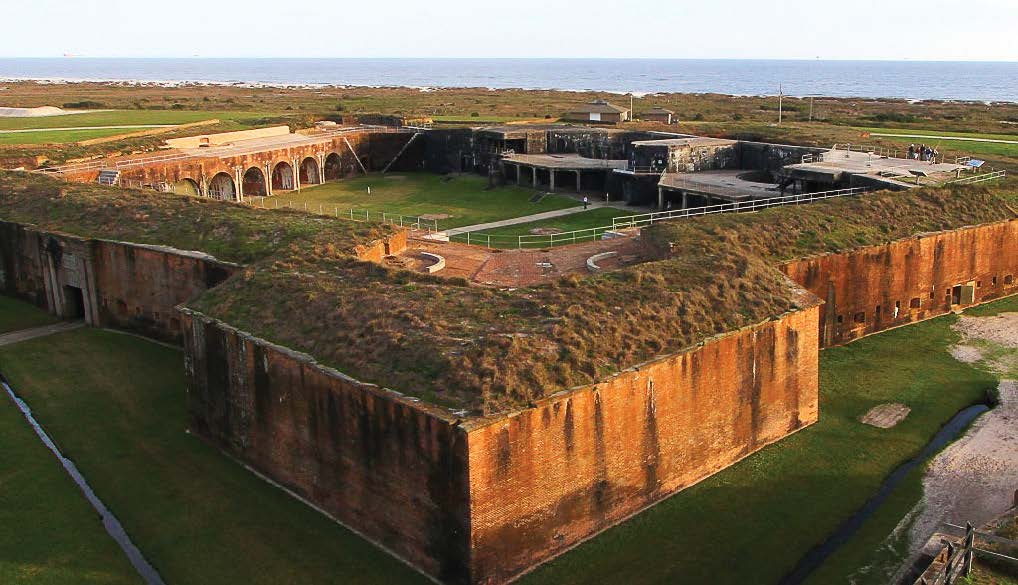 The pentagon-shaped fortress was established in 1819. Construction was completed in 1861. A series of brick-lined tunnels leads to the corner bastions.

At the eastern tip of Dauphin Island, Ala., a barrier island stretching 14 miles east to west but measuring only 1 3/4 miles at its widest point, lies Fort Gaines, a rugged piece of centuries-old history.

Construction on the fort, a pentagonal fortress of brick, masonry and earthen ramparts, began in 1819 but was suspended two years later when Congress canceled its appropriation.

Congress reauthorized funding in 1846, though construction did not resume until 1857.

The fort, named after War of 1812 hero General Edmund Pendleton Gaines, was completed by Confederate engineers in 1861. It played a pivotal role in the August 1864 Battle of Mobile Bay, three miles to the north, where Union Admiral David G. Farragut uttered his legendary order, “Damn the torpedoes! Full speed ahead!”

Partially modernized for the Spanish-American War, the fort’s role in harbor defense gradually waned as its guns became overpowered by the artillery on foreign battleships. After World War I, the U.S. War Department sold Fort Gaines to the state of Alabama, retrieved ownership to briefly reactivate the fort during World War II and then returned the site to Alabama. Fort Gaines opened as a state park in 1955.

The stalwart relic, complete with a tunnel system reaching the five corner bastions, has weathered battle, hurricanes and tropical storms and is still imperiled by shoreline erosion, which claims 10 feet of Gulf of Mexico beach a year. In 2009 it was identified as one of America’s 10 most endangered Civil War battlefields; two years later it was placed on the list of “America’s 11 Most Endangered Historic Places.”

But inside its walls thousands of visitors every year experience re-enactments of fort life from the 1700s to the mid-1900s. Fort Gaines is hailed as one of the most visited family-friendly historic sites in Alabama.

Included in the fort’s attractions are eight original artillery pieces; a blacksmith shop;  kitchens and bakery; officers’ and soldiers’ quarters; museum; gift shop; and the anchor from Farragut’s flagship, the U.S.S. Hartford.

Guided tours by a soldier in period uniform, including a cannon firing demonstration and blacksmithing, are available for groups of 15 or more. Self-guided tour literature is available at the entrance gate.

Fort Gaines is currently under the management of the Dauphin Island Park and Beach Board, which holds special events throughout the year. The Battle of Mobile Bay is commemorated with a one-day celebration every August, and the “Colonial Isle Dauphine” and “Christmas at the Fort” are held in October and December, respectively.

The fort is not the only attraction on the island, the entirety of which has been declared a wildlife preservation and bird sanctuary. Tourist diversions include the island’s abundance of beaches, fishing spots, shops, galleries, restaurants, golf, parks and educational venues such as the Dauphin Island Sea Lab and Little Red Schoolhouse.

Accommodations include hotels, motels, condominiums and private homes, all available every season for rental. 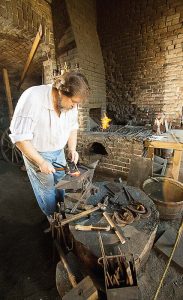 Blacksmith demonstrations are an educational staple at Fort Gaines. 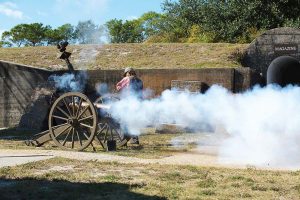 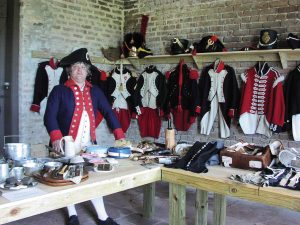 A Fort Gaines re-enactor displays colonial apparel and other memorabilia. 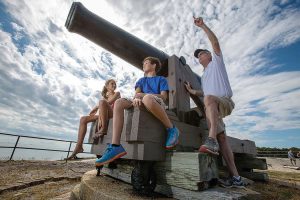 Known as the “Sunset Capital of Alabama,” the picturesque, serene community of 1,300 permanent residents boasts a quiet, relaxing lifestyle. The town’s website promises “you haven’t lived until you’ve experienced the approaching dusk of day from any point on the island.”

The municipal government, headed by a mayor and town council, publishes “The Town Crier,” a monthly four-page newsletter, available for free on its website, www.townofdauphinisland.org.

The contents are what one would expect from a small-town periodical.

The December 2018 edition heralded such news as:

The island is accessible by automobile from the Alabama mainland by the 3-mile-long high-rise bridge along Highway 139. The Mobile Bay Ferry shuttles visitors and their vehicles to and from the island every hour and a half beginning at 8 a.m.

Maps of the island are available at the Dauphin Island Welcome Center.