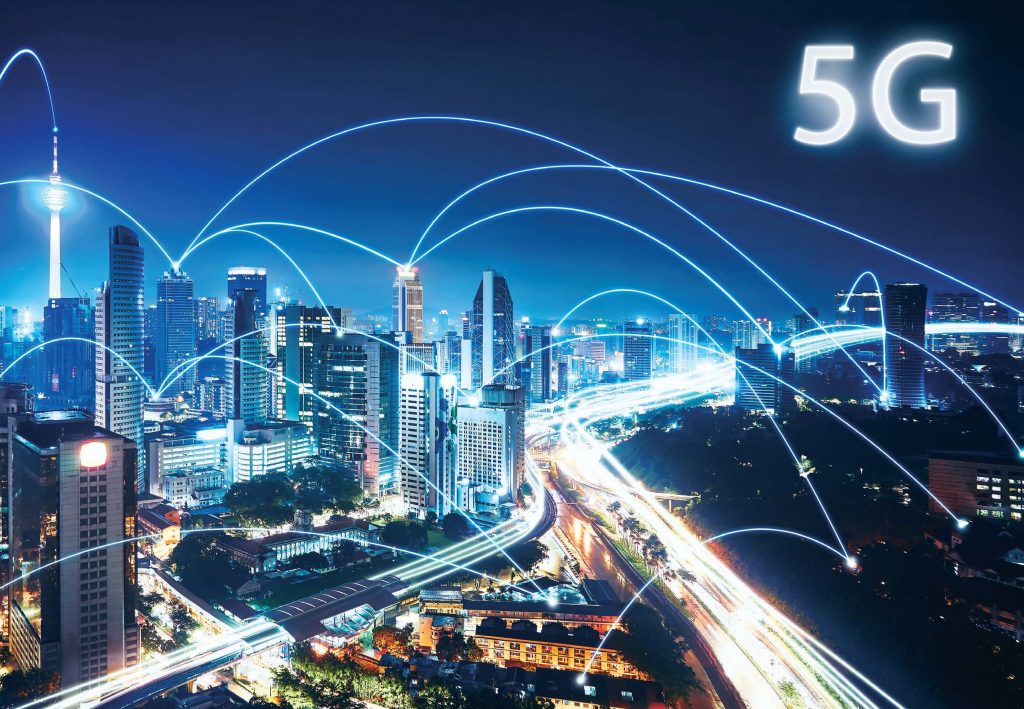 As telecom companies get ready to roll out the next generation of wireless technology, local municipalities are facing thousands of applications for new antenna installations, many of which will be placed in residential areas utilizing existing utility poles.

Besides the obvious issues of privacy, safety, security, aesthetics and revenue raised by these installations, another issue looms large on the horizon: the mounting evidence that constant exposure to radio-frequency microwave radiation is impacting our health.

Municipal managers facing grant applications for new 5G antenna permits need to be aware of the existing and emerging science on this critical issue, and consider their obligations to their constituents when deciding how to address this new technology in their communities.

Researchers and cellphone manufacturers have known for years that holding a cellphone against your head for long periods of time can lead to the development of cancer, and a recent $25 million dollar study by the National Toxicology Program of the National Institutes of

Health added to the extensive scientific literature demonstrating that exposure to radio-frequency microwave radiation can disrupt biological systems, damage DNA, impair neurological and cognitive function and cause oxidative stress that can lead to the development of cancer.

That’s why, buried deep in the legal section of every cellphone, manufacturers instruct users not to allow the device to come into direct contact with their bodies. This warning gives manufacturers some degree of legal protection from lawsuits, while not scaring off consumers.

The issue for municipal managers is involuntary exposure. While cellphone users have the option to use a head set, speakerphone, or even not to use a cell phone at all, no such choice exists for people who live in close proximity to a 5G wireless antenna. The antenna will be emitting powerful radio-frequency microwave radiation 24/7, all day every day, week after week, year after year, whether the nearby residents use the service or not. There is no way to escape.

So what’s different about 5G? 5G will utilize current 3G and 4G wireless frequencies already in use, and add another layer on top, using millimeter and sub-millimeter waves. While this can make data transfer faster, the new waves don’t travel as far, so the rollout of 5G will require a vast network of millions of new antennas located  close to homes and apartments in urban, suburban and rural neighborhoods all across America.

Wireless communications use tremendous amounts of energy. According to the Institute of Electrical and Electronics Engineers, wireless infrastructure consumes at least 10 times as much energy as wired technologies. Thus, this dense network of 5G antennas will require a significant new source of energy, just as towns and cities are trying to move away from fossil fuels and embrace renewable, sustainable energy to reduce their carbon footprint.

Another concern for municipal managers is our uncertain climate and frequency of severe weather events, and their potential impact on telephone poles and lampposts heavily laden with hundreds of pounds of electronic equipment. Contrary to the claims of industry, the equipment necessary to make 5G function does not fit into a pizza box. Indeed, legislation fast-tracking 5G in the twenty states that have approved it allows up to 6 cubic feet of equipment to be installed by each wireless carrier. What happens, and exactly who is liable, when that utility pole or lamppost comes down, injuring someone or damaging a resident’s home or property, is unclear. 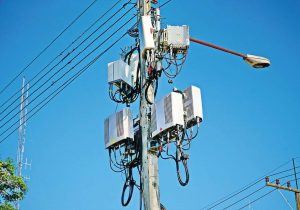 5G antennas can be more intrusive than made out to be and could be an eyesore in residential areas. (Photo provided) 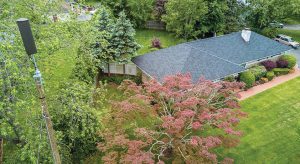 Pictured is a micro cell in a residential area. (Photo provided)

But as most municipal managers know, their options about where antennas may be placed in their own communities are limited.

The 1996 Telecommunications Act prohibits any municipality from basing a decision about the placement of a wireless antenna on the basis of “environmental” concerns, which the courts have interpreted to mean “health” concerns. In addition, the legislation recently passed in 20 states preempts local communities from much of the control they formerly had over the placement of antennas.

However, siting decisions can still be based on other factors such as aesthetics, safety, potential revenue and demonstrated need.

Recently some municipalities have used declining property values as a justification for denying permits for antennas in strictly residential areas.

Other options available to municipal managers include adopting regulations that require specific setbacks for new wireless antennas. The city of Petaluma, Calif., is considering a code regulation that stipulates that no wireless antenna can be placed within 250 feet of a residence, and may not be closer than 1500 feet from any other antenna.

What are the benefits of 5G? It’s not required in residential areas for national security or public safety. It is not needed to improve cellphone service and is not likely to close either the digital divide or the rural divide. What it will do is facilitate the Internet of Things and driverless cars, and allow wireless companies to compete with cable companies to offer internet access.

The debate over the deployment of 5G in villages, towns and cities across the country is likely to grow in the next few years as more science emerges and telecoms expand into new territories. How Americans — and municipal managers — will decide between freedom from involuntary exposure and the convenience of instant technology is anyone’s guess.

The author is the associate director of Grassroots Environmental Education, a nonprofit environmental health organization based in New York.