While the federal minimum wage has remained at $7.25 since early 2009, a number of employers have pledged to increase their lowest pay rates to $15 an hour. This trend is largely due to public pressure to maintain quality of life among all working people coupled with the need to retain employees in a time of labor shortages and attractive offers elsewhere.

A number of large, well-known companies, including Amazon, Charter Communications, Target and Walt Disney’s theme parks have pledged to the higher wage, and local communities are beginning to innovate policies in order to increase labor standards.

According to an inventory conducted by UC Berkeley’s Labor Center cities and counties across the country have begun to follow suit with corporations. Before 2012, only five localities had minimum wage laws; currently, 40 counties and cities do so in Washington, California, Arizona, New Mexico, Minnesota, Illinois, Maine and Maryland.

Whether public pressure or ordinances enacted in cities is the driving force behind the raises, the impact on families is astronomical. 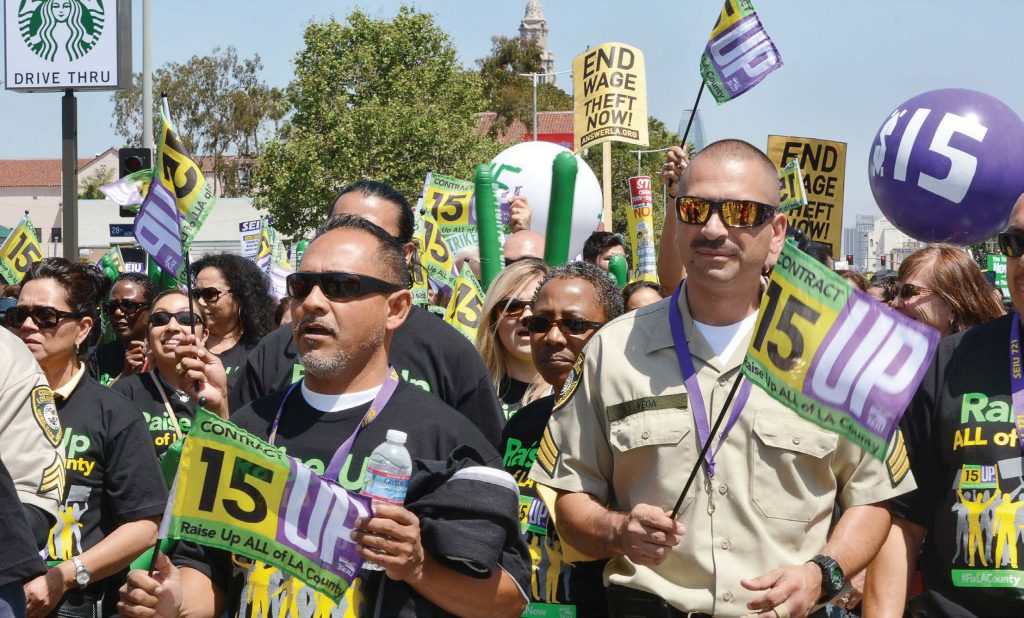 Protestors hold signs and flags advocating raising the minimum wage during a demonstration in Los Angeles on April 15, 2015. The state of California has 22 communities that have enacted minimum wage ordinances, the majority of which are on a path to $15 per hour. (Dan Holm/Shutterstock.com)

A number of communities across the nation — specifically on the West Coast — have already implemented these ordinances and are on the way to compliance.

In 2015, Seattle legislators signed a bill to gradually increase the city’s minimum wage to $15 per hour over a number of years. On Jan. 1, 2017, the city became the first in the nation to reach a $15 minimum wage. California, as a whole, has the most communities that have enacted minimum wage ordinances — 22 of them, the majority of which are on a path to $15 per hour.

And, according to the Poster Compliance Center, the West Coast isn’t the only region raising minimum wage amounts. Recent laws that passed in Flagstaff, Ariz.; Minneapolis, Minn.; and Montgomery County, Md., all provide multi-step increases to $15, and in Illinois both Chicago and Cook County enacted minimum wage ordinances with stepped increases to a lesser rate of $13, followed by annual adjustments.

One of the Midwest communities currently navigating a minimum wage ordinance is Saint Paul, Minn. Currently, Minnesota’s state-sanctioned minimum hourly wage is $9.65 for large employers and $7.87 for smaller ones. However, a number of communities within the state have taken minimum wage into their own hands. In fact, according to a MinnPost article, almost everyone who voted in St. Paul’s mayoral election last fall went for candidates who supported a minimum wage hike.

While most Saint Paul constituents were supportive of the minimum wage hike, they were concerned about how a municipal ordinance that would increase the minimum wage in Saint Paul could be designed in a way that maximizes worker benefits while minimizing unintended consequences in the business community that employs those very workers.

“(Increased minimum wage) could disproportionately affect the city’s poorest workers, benefit outside communities whose residents commute to Saint Paul for employment and force some businesses to cut hours or jobs,” said B Kyle, president of the Saint Paul Area Chamber of Commerce, in recorded meeting minutes.

In an attempt to address those concerns and gather feedback from all those involved — government officials to local business owners and employees themselves — researchers from Citizens League, a nonpartisan think-tank, went to work, resulting in a more than 400-page report summarizing its findings and making recommendations.  In the end, three proposed recommendations were submitted to

Saint Paul city officials and presented in a public meeting. Each of them recommended raising the minimum wage to $15 and varied in timeline for implementation between small businesses and large businesses. They also varied in how to address those who work primarily for tips, like waitstaff.

The ordinance is expected to pass in the coming months, according to Saint Paul Mayor Melvin Carter, who said in a MinnPost article that he’s “committed to signing a $15 minimum wage into law before the end of this year.”