For 30 years the town of Glastonbury, Conn., had discussed the need for access to the riverfront both for first responders in case of emergency and public recreation. The town’s work to make this a reality earned it the National Recreation and Park Association’s Innovation in Park Design award. Kathryn Paquette, Glastonbury’s marketing and communication specialist, shared some of the town’s answers on the award’s application.

“Glastonbury, Conn., borders 9 miles of the Connecticut River yet the town had virtually no public river access for active and passive recreational opportunities,” the application states. “To successfully address these significant community needs the town developed a strategic and complex plan for the development of a riverfront park.”

One of the greatest opportunities for improvement was the tank farm and oil facility that was housed where Riverfront Park now resides. “A deteriorated and environmentally contaminated abandoned oil storage and distribution facility was located on 23 riverfront acres and in dire need of remediation and repurposing,” the application admits. In order to rectify this and move forward with the park plans, the town acquired much needed land, came up with creative financing opportunities, formed public, private and community partnerships — something that earned it the International City/County Management Association’s Program of Excellence Award for community partnership — and created an innovative design.

“The project offered many lessons learned, most notable the effectiveness of a robust planning process and an engaged citizenry,” the town offers. “Glastonbury affirmed the importance of seeking community feedback  and support from state, federal and local partners as well as the benefits of a strategic, phased approach that allowed the community to enjoy project benefits throughout all stages of implementation.” 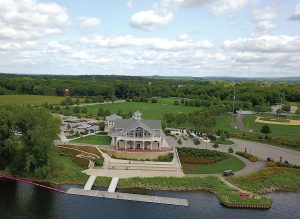 After remediation took place to the oil facility, the area now houses a senior and community center. Various athletic fields are throughout the acres of Riverfront Park. It also holds plentiful recreational opportunities, including fishing and kayaking. (Photo by Paul Coco) 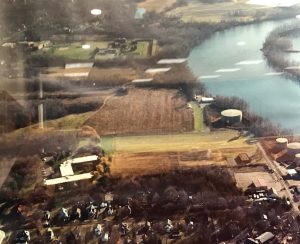 Prior to the plans for Riverfront Park, acres of desirable waterfront land was home to an environmentally contaminated oil storage and distribution facility. However, due to its tie to the shipping industry in Glastonbury, the town was able to save the foundation. (Photo provided by Glastonbury, Conn.) 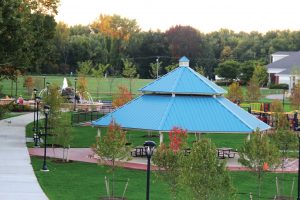 The town of Glastonbury wanted residents to be able to enjoy a wide variety of both passive and active recreational activities at Riverfront Park. This includes a public fountain, covered pavilion, playground, athletic fields and walking trails. (Photo provided by Glastonbury, Conn.) 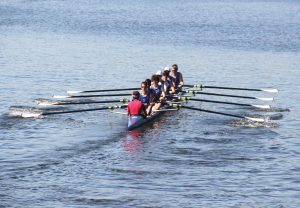 One of the greatest opportunities for community engagement came from Riverfront Park becoming the home of Glastonbury’s high school crew team, the Tomahawks. The Friends of the Glastonbury Rowing group assisted with choosing the best location for the boat house, which also provides facilities for the crew team. (Photo provided by Glastonbury, Conn.)

In order to make the park a reality, the town acquired seven parcels of land, provided the necessary remediation for the oil and distribution facility and relocated a main road. In an effort to ensure the community was included, the town held public forums to help discover the amenities that were a priority for the community itself, not just the region or state.

The town ensured that there was “strategic placement of park amenities to support the successful coexistence of active and passive recreational activities.” A brownstone foundation that has been important to the Glastonbury shipping industry’s history was preserved. The natural topography of the land was utilized to help build an outdoor ice rink. Subsurface material was also used in the park’s parking lot.

The road’s relocation enabled the town to use two parcels of land to create a 126-acre, contiguous riverfront area for the park.

This, along with the many amenities, allows the park to offer a place for waterfront weddings, boating, boating storage; a venue of parties and corporate events; and crew facilities for the high school Glastonbury Tomahawks — all this in addition to having an accessible playground, pavilion and fountain.

The Riverfront Park project has become a model for many other town operations.

With the support of the town council and board of finance, one of the town’s primary objectives was to ensure that the community was engaged in the project. The town did this by involving the community in multiple aspects, including raising awareness, funding support, design efforts and partnerships. Specific topics raised were desirable amenities, park design and types of facilities.

The town utilized public meetings, collaborated with the local chamber of commerce and mailed out brochures to residents in order to gain feedback throughout the Riverfront Park project. The town also sought out input from the Capital Region Council of Governments, Connecticut River Assembly, Connecticut Department of Energy and Environmental Protection and the U.S. Army Corps of Engineers.

Other groups approached for their opinions were the Friends of Glastonbury Rowing; Glastonbury Basketball Association; town  commissions including conservation, town planning and zoning, and recreation; the fire and police departments; and youth sports organizations.

Valuable insights that contributed to the project’s success included “consultations with environmental groups led to an eco-friendly design; public feedback inspired the second story boathouse banquet facility, which hosts over 70 events annually and generates revenues to fund operating and maintenance costs; research and input for FOGRI volunteers and restaurateurs influenced the boathouse location and kitchen design respectively; the local beautification commission shaped the native species landscape design; input from the Glastonbury Basketball Association led to the addition of lights to the outdoor court; and input from the state archaeologist helped preserve a historic foundation and inspired the inclusion of interpretive signs funded by the PTO.”

The town’s beautification commission assisted in designing a landscape plan with plant species native to Connecticut. Members of the fire and police departments helped the town to locate and design the dock necessary for emergency response access. An analysis was done with the help of the FOGRI, which led to the boathouse’s location, elevation and design.

The project involved working alongside multiple agencies, such as the town council, town’s volunteer recreation commission, state boating division and the U.S. Coast Guard Auxiliary. “The extensive amenities and the beauty of the park reflects the overwhelming community support and engaged citizenry,” Paquette shared.

The town created various partnerships with multiple businesses in order to help fund the Riverfront Park project. Revenue sharing contracts were created with caterers, audio visual providers and equipment rental businesses. A riverfront sharing partnership was also created with L.L. Bean for recreation programs. Along with L.L. Bean, Riverfront Park has hosted recreation programs that not only create opportunities for residents, but also create additional revenue for the town.

Groups within the community helped to raise money for the project with donations reaching over $377,000. FOGRI donated $300,000.

The Glastonbury Basketball Association donated $50,000. An amount of $13,900 was donated by the Glastonbury Parent Teacher School  Organization. Glastonbury Lacrosse Club and Hartwell Soccer donated $12,500. A $1,000 donation was also received from Bike-Walk Glastonbury.

Multiple state grants were applied for and received for remediation of the brownfield oil facility site, construction of recreational trails, the addition of a second level to the boathouse, which would house a banquet facility and public recreation facility construction. The grants totaled $4,000,000.

“The park has become famous for its breathtaking sunsets, and the banquet facility has hosted 46 weddings, 80 corporate functions and 18 private events with continuously growing revenues,” Paquette reiterated from the application. With this new banquet facility, the town was also able to hire an event and banquet facility manager and a marketing and communication specialist.

“Designed as a self-sustaining facility,” it states, “revenues from the banquet hall rentals, the boat launch and boat storage already offset nearly 100 percent of operating and maintenance expenses in the second operating year.”

The local Rotary Club provided the project with $125,000 to install a covered picnic pavilion. In November 2012, local voters at a public referendum supported a $1.2 million bond to go toward Riverfront Park.

Several processes are in place to ensure that Riverfront Park evolves and continues to meet the needs of the community, including a financially self-sustaining business model, which challenges town staff to focus on continuous improvements and new revenue sources; employing a full-time event and banquet facility manager and marketing and communications specialist to market and manage the banquet facility and maximize revenue opportunities; encouraging ongoing community feedback, which has led to the installation of six bike racks and a children’s library at the playground; and ongoing efforts to increase public access to the river.