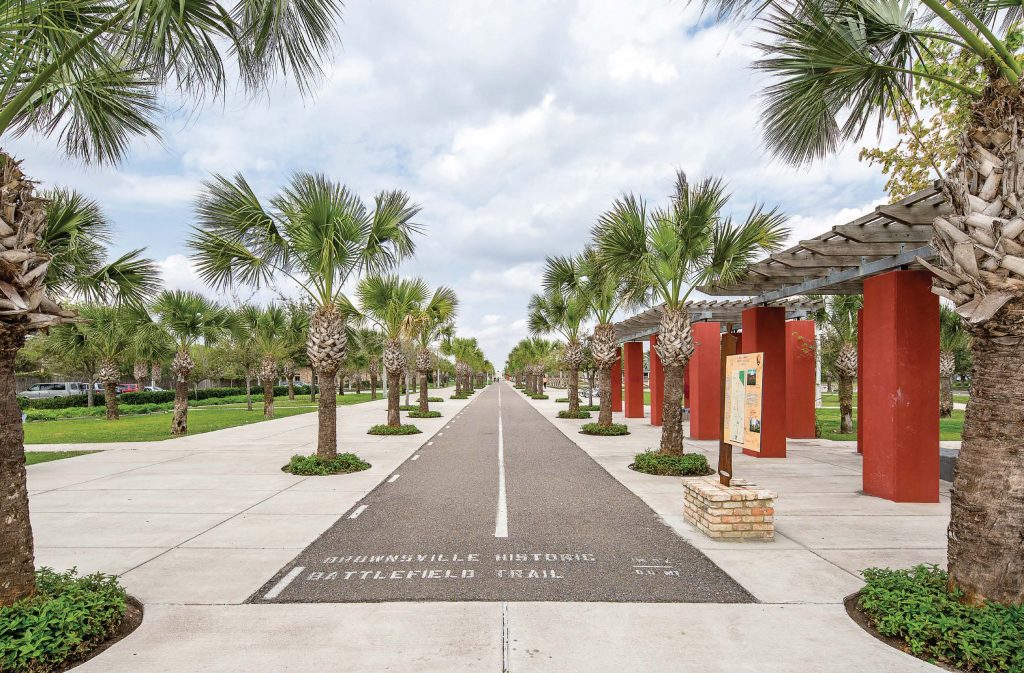 Pictured is the Brownsville Historic Battlefield Trail in Texas. It is one trail in a network of them throughout Cameron County, all aiming to get residents active. (Photo provided by Rails-to-Trails Conservancy)

Leave it to a Cameron County, Texas, physician/city commissioner to come up with a trail network that not only benefits the health of her city, Brownsville, but also its surrounding communities — Los Fresnos, San Benito, Rancho Viejo, Laguna Vista, Port Isabel, South Padre Island, Los Indios, Rio Hondo, Harlingen and Combes — all of which make up one of the poorest counties in the nation.

Rose Gowen, M.D., used her medical knowledge and compassion to bring good health and much-needed outdoor activity to her community. Gowen, a Brownsville native, graduated from the University of Houston in 1980.

“In 2007, I was visited by Dr. James McCormick, the dean of the University of Texas School of Public Health here at the Brownsville Campus,” said Gowen.

“The campus had been established in approximately 2001 when the state legislature created the Regional Area Health Science Center in the valley. Dr. McCormick was trying to recruit clinicians to participate in clinical research and he landed on my doorstep. I said ‘yes’ not really knowing anything about public health. At that time, I was growing bored with clinical practice and asking myself, ‘Is this all there is?’”

As Gowen became involved she learned what the RAHSC was finding: one in three people are diabetic and 50 percent of those people are unaware they are; the state had the highest limb amputation rate; and it also had very high rates of nonalcoholic liver cancer. All of these were due to very high rates of obesity and could be avoided with healthy eating and increased physical activity.

These published scientific findings guided Gowen’s public health team and community members to work toward healthy eating choices and active living — as well as the policy that promotes these things.

In writing a weekly newspaper column and getting highly involved with creating a farmer’s market, Gowen grew to see that “health” was not being looked at or spoken about in city government.

“I decided to run for office to change that,” said Gowen, who had also learned the economic impact of being unwell and wanted to make policy makers aware and responsive.

“It’s been a wonderful ride and I am now serving my third term. While attending an Active Transportation conference where the theme was bicycle tourism, we were impressed with the earnings of other parts of the country that are destinations for bicycle and active  tourists. We began thinking that if we were one such destination, we could generate ‘new’ money (new tourists) while at the same time inspire our own people to get off the couch and take a walk, run, kayak, ride a bicycle and thus lowering our rates of physical inactivity and improving access to such trails.” 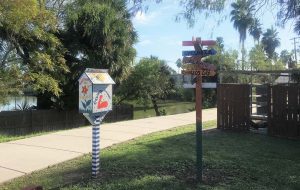 Pictured is the Belden Rail-Trail in Brownsville, Texas. (Photo provided by Rails-to-Trails Conservancy) 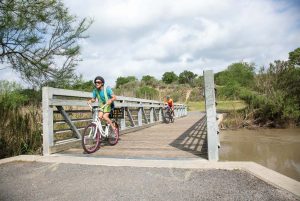 Not only are cyclists, runners and walkers getting exercise, they are also able to explore Cameron County’s tropical desert habitats. (Photo provided by Rails-to-Trails Conservancy)

The group applied to the Legacy Foundation for funds to create a plan to connect their cities and was awarded $100,000. Each city then put approximately $10,000 of its own money into the pot and was able to hire expert consultants and achieve what is now called the active plan. This visionary endeavor consists of 428 miles of trails and routes both on and off the road, plus in the water.

“Our active plan caught the attention of the Rails-to-Trails Conservancy, and we were adopted or endorsed by them as one of their TrailNation projects,” said Gowen. “This has given us validation on a national level and has given us experts to assist with fundraising and policy that will impact the completion of the plan. The biggest challenge will be the money to complete the plan.”

The active plan was finalized and adopted by all cities in 2017, and Gowen and her team are currently working on a governance framework.

No formal partnership policy exists at this time, but all donations are welcome, according to Gowen.

“We — the 10 cities and Brownsville — are all partnering with Railsto-

Trails for implementation,” said Gowen. “Trails are for walkers, joggers, bicyclists, bird watchers and the water routes are for kayakers and canoes.”

According to Brandi Horton, the communications director for the Rails-to-Trails Conservancy, the nonprofit organization is dedicated to creating a nationwide network of trails from former rail lines and connecting corridors, building better places for improved people.

The organization has more than 160,000 members and supporters; 3,000 miles of rail-trails and multi-use trails; and more than 8,000 miles of potential trails. The goal is constructing more walking and biking communities nationwide.

“There are important lessons that communities can learn from across the country when we leverage active transportation and active tourism as tools to address significant social needs,” said Horton, adding that the active plan as a TrailNation project was adopted because of its focus on health and economic development in a unique place. Mayor Cyndie Rathbun of Rancho Viejo is very enthusiastic about the venture, calling it an “awesome plan.”

“I couldn’t be happier to see it come to fruition,” she said. “The town of Rancho Viejo is very proud to be part of the innovative Lower Rio Grande Valley Active Plan. We know our area of the country is in a high-risk zone for increased incidence of diabetes, obesity and poverty. Additionally, the Lower Rio Grande Valley lacks the adequate infrastructure and opportunities for pleasant and safe outdoor activities. The active plan serves to remedy these problems in one fell swoop.

“By providing a safe and vibrant trail that connects municipalities, important historical destinations, federal and state parks and a World Birding Center, the trail provides our residents with a way to explore the unique beauty of our tropical desert habitats with their families. But beyond just studies that prove this, it is obvious that our residents will benefit from a trail nearby not just in terms of their physical health, but in their emotional well-being, too.”

Finally, Gowen is elated that the public is “intrigued and interested.”

She commented, “This is evidenced by the Legacy Foundation granting an additional $2 million to Brownsville and $1.2 million to Harlingen to extend trails in their cities … the first funding of the plan network. These awards were granted in the spring 2018 … proving that people across the county are interested and looking forward to trails.”

More TrailNation and active plan information can be found at www.railstotrails.org/activeplan.