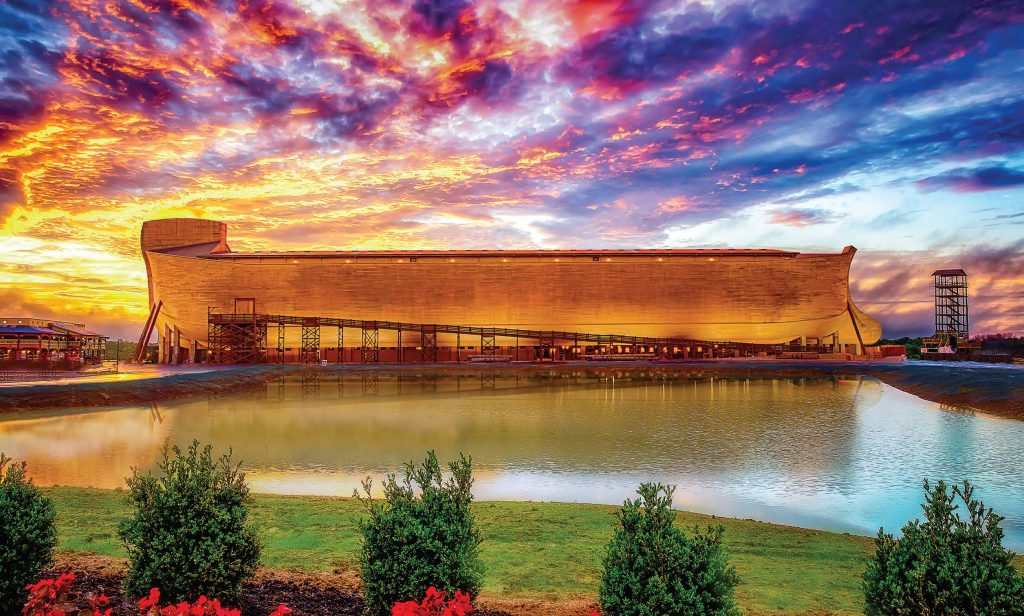 The replica of Noah’s ark stretches almost two football fields in length and towers seven stories above the ground.

Atop one of the scenic rolling hills of Williamstown, Ky., population 3,931, rests a boat — a really big boat. 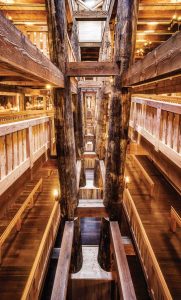 The ark is the largest timber-frame structure in the world. Some of the supporting beams measure 10 feet in diameter.

Hailed as the world’s largest timber-frame building, the life-size replica of Noah’s ark towers seven stories above the ground and measures 510 feet long and 85 feet wide.

The brainchild of Answers in Genesis, a Christian apologetics ministry that also built the Creation Museum 45 minutes to the northwest, the ark serves as the centerpiece of Ark Encounter, America’s newest theme park, which opened in 2016.

Attractions planned for the future include a walled city, first-century Middle Eastern village and marketplace, Tower of Babel and a walk-through aviary.

The park, located 40 miles due south of downtown Cincinnati, welcomed more than 2 million visitors in its first two years of operation. 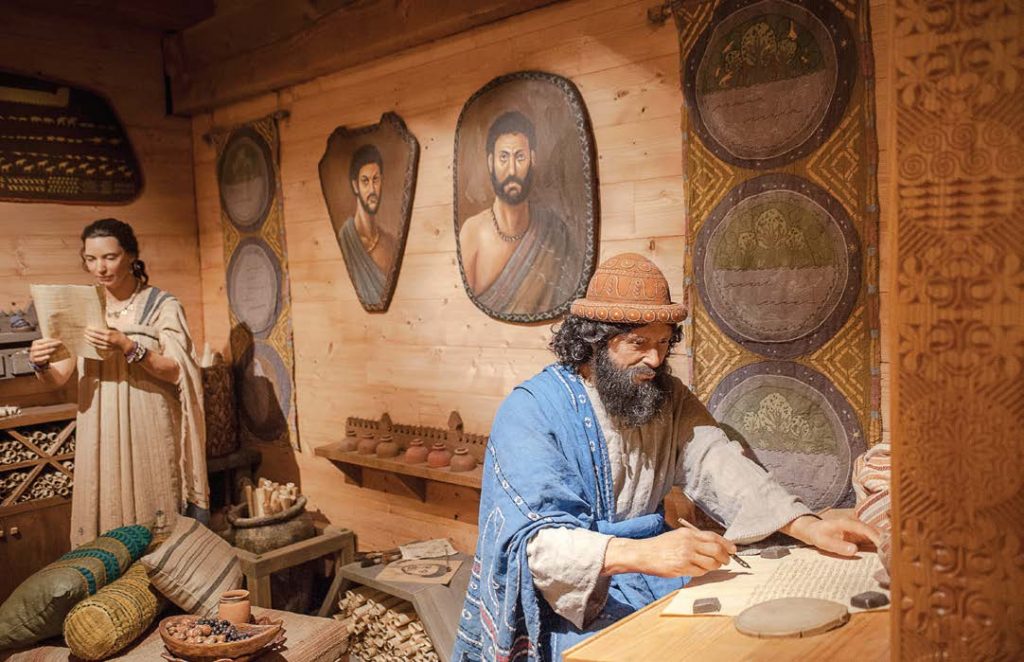 In one of several dioramas in the ark, Noah records an entry in his captain’s log as his wife reads a parchment. 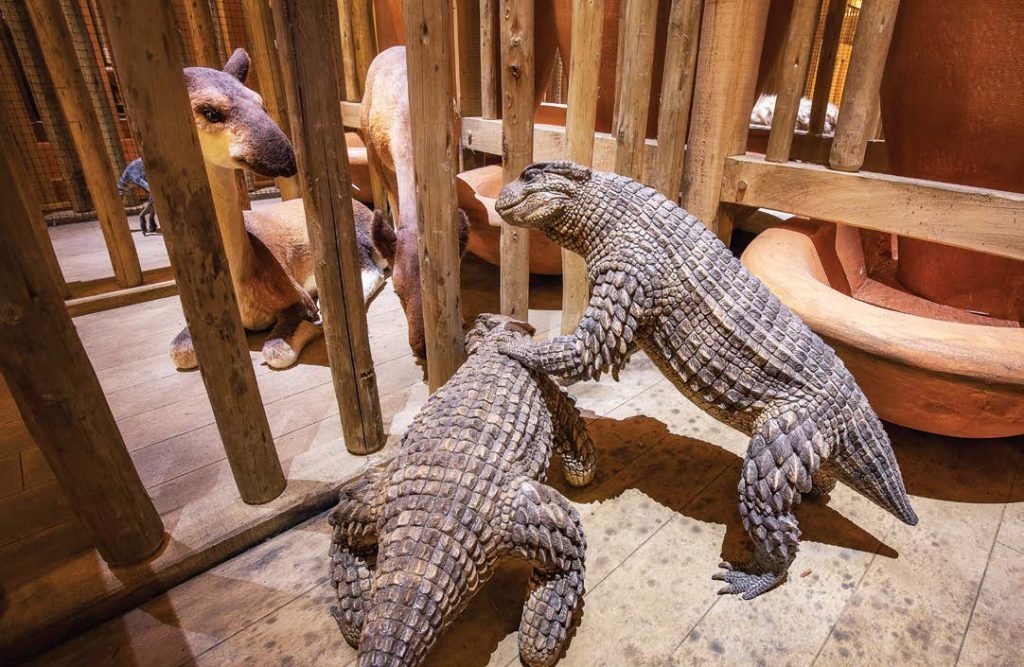 The ark contains 132 bays, many of which enclose likenesses of animal “kinds” thought to accompany Noah and his family. Answers in Genesis contends only about 7,000 animals were housed in the ark during the flood, from which the world’s current species have proliferated.

Ark Encounter is not without controversy. In fact, its history is a chronicle of grappling with opponents and addressing misconceptions.

• On Dec. 1, 2010, Answers in Genesis and the nonprofit Ark Encounter LLC announced their plans to build the theme park. They researched possible sites in several Midwestern states and selected Kentucky because of its economic development incentives.

• Shortly thereafter, Kentucky Gov. Steve Beshear issued a press release embracing  the project, citing a feasibility study concluding the park would employ 900 people and deliver an economic impact of $4.3 billion in its first 10 years of operation.

• Williamstown designated a 1 1/4-mile radius around the site as a tax increment financing district, returning 75 percent of the district’s sales and property taxes to Ark Encounter for 30 years, a move unsuccessfully challenged by some as a violation of separation of church and state.

• In December 2013, Williamstown offered $62 million in unrated bonds to help finance construction. Bond sales were somewhat lackluster until the airing of a Feb. 4, 2014, debate between Answers in Genesis founder Ken Ham and Bill Nye “The Science Guy.” The debate ignited bond sales and donations and three weeks later Ham announced enough funds were raised to begin construction. Groundbreaking was scheduled for May 2014.

• In July 2014 Ark Encounter applied for tax incentives with the state. The Kentucky Tourism Development Finance Authority’s performance-based incentive program allows qualified tourism projects to recover 25 percent of sales tax paid by visitors for tickets, food and souvenirs. The application was rejected in December 2014 for alleged discriminatory hiring practices because Ark Encounter required employees to sign a statement of faith.

• Answers in Genesis filed a federal action on Feb. 5, 2015, challenging the rejection as an unconstitutional violation of its religious freedom. In January 2016, the court ruled in favor of Answers in Genesis, stating the organization was permitted to give employment preference to persons adhering to its central tenets. The court also decided Ark Encounter met the legitimate secular public purpose of spurring tourism and thus qualified for the incentive.

• Ark Encounter posted a rebuttal to the claim of unconstitutionality in the FAQ section of www.arkencounter.com: “No taxpayer dollars were being applied for in building the Ark…. The incentive pertains to sales tax collected at the finished Ark…. Thus, no unwilling taxpayers have seen their tax dollars used to build the Ark.”

• Ark Encounter held a ribbon-cutting ceremony July 5, 2016, and opened to the public two days later. About 150 members of Tri-State Freethinkers gathered near the highway exit to protest the opening. Eric Hovind, founder and president of Creation Today, launched a counter protest and offered to pay admission fees for any opponent wishing to tour the ark. The gesture was accepted by 21 of the freethinkers.

• Ham invited Nye on one of the Ark’s first tours, and they held an informal debate as they toured the structure. Nye called the displays “very troubling” and opined about school kids being “indoctrinated” and “brainwashed.”

• The Freedom From Religion Foundation mailed more than 1,000 public school districts in five states, urging them not to organize field trips to Ark Encounter. Ham responded by offering public school groups a $1 admission per child and no charge for accompanying teachers throughout 2016. 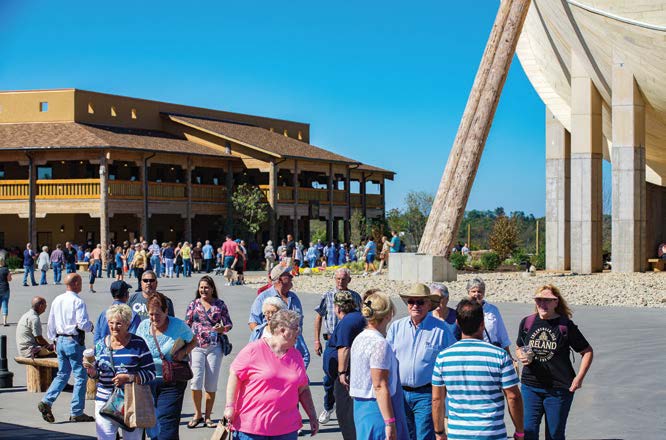 Ark Encounter drew more than 2 million visitors in its first two years, an average of nearly 3,000 people per day.

Williamstown touts itself as “Home of the Ark Encounter” on the homepage of its website, www.wtownky.org.

“The dynamics of this worldwide attraction is quickly changing Williamstown from being a bedroom community to a vacation hub,” says the website. “Hotels and restaurants are developing at both of our Interstate 75 exits and you will find that downtown still offers the quaintness of a small town.”