It’s probably safe to assume that most city officials desire to preserve their community’s resources — environmental and fiscal — in order to provide the best quality of life for residents. It’s probably also safe to assume that at the same time those same officials have likely experienced some levels of frustration due to unfunded federal mandates and struggled to come up with the resources needed to comply with those regulations.

Many of the federal regulations dealt with today were first instituted in the 1970s when the EPA realized the negative impact human actions were having on the environment and that steps were needed to correct and protect our natural resources for the future. The Clean Water Act, Clean Air Act and Resource Conservation and Protection Act were signed into law during that time period.

According to the Springfield Director of Environmental Services Errin Kemper, those were all good things. “Enforcement started to really ramp up the last 10 years and communities were struggling to meet the requirements of the Clean Water Act, for example.”

Many wastewater, stormwater and solid waste issues are interrelated but are assigned to different regulatory departments and are under different legislation, and often, regulators don’t talk to each other, according to Springfield’s officials. This has created burdens on the community’s financial resources and has caused, in many cases, sewer rates and drinking water costs to escalate.

However, the monies needed to fund these projects come from the same source — one municipality and its residents in the form of either increased utility bills, increased taxes or fees. 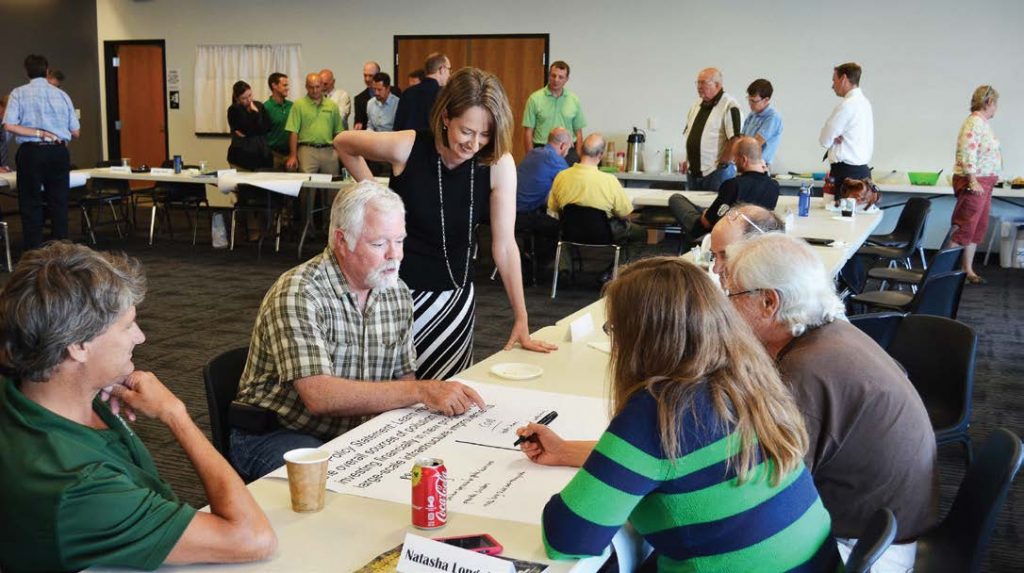 In order to develop an integrated plan for the city that ensures its limited financial resources are being used wisely, an important component was creating an “environmental priorities task force.” The members, some shown here during a planning session, examined all the environmental issues the city was facing. (Photo provided)

So, according to Kemper, around 2012 after a public outcry, the EPA realized the burden this was creating and because of the Stoner Memo approved integrated planning.

The Stoner Memo was named for Nancy Stoner, at the time acting assistant administrator of the office of water, and co-authored by Cynthia Gibb, assistant administrator of the office of enforcement and compliance. It states, in part, “In embracing an integrated approach to waste and stormwater management, we are not suggesting that existing regulatory or permitting standards that protect public health and water on which communities depend be lowered. Rather, we are simply suggesting that such an approach will help municipalities responsibly meet their CWA obligations by maximizing their infrastructure improvement dollars through the appropriate sequencing of work.”

By definition an integrated development plan is a super plan for an area that gives an overall framework for development. Its purpose is to coordinate the work of local and other government entities and to offer a coherent plan to improve quality of life for people in the area. Like most cities, federal and state regulations were requiring Springfield to devote increasingly large amounts of money and resources toward protecting the environment while at the same time they were dealing with increased demand for public spending and growing levels of poverty among its residents.

Kemper said that, generally, most communities developing integrated planning focus on combining stormwater, sanitary and wastewater, “but Springfield decided to go one step further and include air quality and drinking water.”

The city partnered with city utilities — including water, gas and electric — and Greene County to develop its integrated plan. “We decided to take a citizen-based approach,” Kemper said. 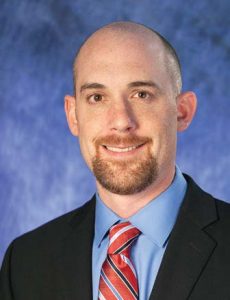 Springfield, Mo.’s, Director of Environmental Services Errin Kemper was promoted to that position April 1 of this year after former director Steve Meyer retired. Kemper was assistant director since 2013 and worked for the city as an engineer for 10 years prior to that. Kemper has been instrumental in developing the city’s integrated planning approach. (Photo provided)

That approach, according to Kemper, was to develop a framework over the last five years, investing a lot of money and man hours to  prioritize a plan that would do the most good and be the most cost effective. Officials involved the public via a task force, a survey and the city website, and they came up with this “decision-making matrix.”

In 2014-15 they put together a task force called the environmental priorities task force made up of about 30 citizens to look at what the community most needed and where environmental fixes would be most effective for their residents.

Kemper gave the example if there were two streams in town and everybody uses one to swim and fish while nobody uses the other, it makes the most sense to invest in the one that everybody uses — but that’s not necessarily the way the EPA would’ve looked at it.

According to City Manager Greg Burris in a presentation given about the integrated plan, the federal government takes the siloed approach. One week the stormwater people may come to town and say this is what needs fixed and this is what you have to spend, and the next week the wastewater people come to town with the same message. So they created a timeline of federal regulations that the city would be required to comply with over the next 15 years beginning in 2009, and he said it was “frightening.” The timeline showed that Springfield, a community with a reputation of being a good environmental steward, was going to need to spend $1.6 billion dollars over that time period.

Springfield based its integrated plan for the environment on the question, “If we only had $1 to spend, how do we invest in what matters most to the community while addressing the most significant problems using the most effective solutions in a way that’s affordable to our citizens?”

“We had an epiphany — we discovered that sewer runoff was a low priority as a pollutant source, occurring only occasionally, while urban runoff was a high priority and had a bigger variety of pollutants and impacted everyone,” Kemper said.

Next officials took a look at how to address the pollutants, and finally, they assessed financial liability and they received some guidance from experts.

The four key elements or lenses that they looked at when making decisions about environmental spending are:

1.) Community priorities — The newly created environmental task force sought to answer two questions: What are the most important resources and where should we focus our efforts? A survey was sent out to residents to get feedback.

2.) Prioritize sources of pollutants — Segmenting the environment into land resources, aquatic life in streams, recreation and air quality, the city looked at all the pollutants and the source of those pollutants and asked, “If you could wave a magic wand and remove one pollutant, what would it be?”

3.) Prioritize solutions — Determine the sustainable return on investment environmentally, economically and socially for each solution. For example, if water quality in the stream is a priority and two solutions would be a new treatment plant or creating a rain garden to deal with stormwater runoff, which would be most affordable and do the most good?

4.) Financial capability — If 2 percent of the median household income is the benchmark provided by the EPA, how do any decisions made impact low-income families, the region’s ability to attract new businesses and the city’s ability to fund other critical projects?

“Every time we go to address an environmental mandate we make sure any decisions we make line up with all of those lenses,” Kemper said, adding that the three entities have pooled their resources; the city paid for one study, the utilities another and the county another. “We all just work together.”

And at the root, he said, “We have to make sure that we don’t spend more money than our community can afford.”

Kemper said while this is still in the early stages, the city has been seeing results. One way in which having the integrated planning has helped the city is by having a consent decree amended. In 1995 a judgment was issued to the city for being in violation of the Clean Water Act. That was amended in May of 2015 because of having the integrated plan in place showing that improvements would be made. The city has a 10-year commitment to spend $200 million in investments. Burris said in a press release, “We believe if not for our unique integrated planning approach our plan would be considerably more expensive, up to $600 million more than we’re required to spend now.”

Kemper also said that the state of Missouri is willing to work with the city on getting its total maximum daily load impairment on the streams down as long as it continues to address the issue. In all, the TMDL numbers have gone down.

The city has been issued several awards, including peak performance awards from the National Association of Clean Water Agencies and the Missouri Water Environment Federation for both wastewater treatment plants, plus awards from the American Public Works Association. The former director of environmental services, Steve Meyer, testified before the House Transportation and Infrastructure Committee and the Subcommittee on Water Resources and the Environment in July 2014, and city representatives have given over 100 presentations across the country about their integrated planning approach.

Director of Environmental Services Errin Kemper is shown standing on the right — wearing a blue shirt and red tie — listening to a member of the environmental priorities task force during one of the planning sessions to develop the city’s integrated plan for environmental issues. (Photo provided)

The city was one of five cities to receive an EPA Integrated Planning Assessment grant.

Kemper pointed out that the integrated plan is “not a project list” like a master plan, for example, but the integrated plan could be used along with a project list. He also said because officials view things differently now, it’s allowed for better management practices, too. For example, on the stormwater side if a need exists, officials are able to get workers out in the field to fix the problem that day.

“There’s not as much of a question as to ‘what should we do?’ Our staff has a better idea of what to do,” he said.

For communities considering an integrated planning approach, he said, “The number one thing I always recommend is if they do nothing else, get the people together to talk.”

He suggested pulling together stormwater, air quality and solid waste people to think things through because there is a lot of overlap. “When you look at things objectively and subjectively you get a lot more traction.”

He added, “This (plan) is always going to be in progress.”