The final sign to welcome visitors is located at the outskirts of town. Wall Drug is the town’s largest employer. (Photo provided)

Dorothy Hustead was hot, tired and trying to stave off the discouragement of a failed career experiment.

In December 1931, she and her husband, Ted, had rolled into Wall, S.D., with their 4-year-old son, Ted’s $3,000 inheritance from his father and all their worldly goods stuff ed into — and onto — their Model T. Ted had graduated from pharmacy school at the University of Nebraska a couple years earlier and the couple buoyantly anticipated a career as drug store owners.

The Husteads had prayed and decided to give the venture five years. They purchased the town’s apothecary, established in 1909, which had dispensed only over-the-counter medicines. Ted’s degree brought prescriptions 50 miles closer to the townspeople.

Wall, population 326, had met its triumvirate of deal breakers: a small town with a Catholic church holding daily mass and a drug store for sale. What the town still did not provide by that sweltering July afternoon in 1936 were customers. Dorothy went home to take a nap, leaving Ted to tend their dormant enterprise.

She lay next to the open bedroom window, trying to catch a breeze and refresh her waning optimism. What she caught instead was the constant drone of traffic from nearby Route 16A. Many of the travelers were driving through the arid, shadeless desert to visit Mount Rushmore, then a work in progress 77 miles west of Wall.

Dorothy reckoned they must be as parched and miserable as she was in the relentless Sunday afternoon heat.

Then came a quiet inspiration, a life-changing epiphany, a gentle echo of a precept from the Good Book, something about “giving a cup of cold water to a stranger”… 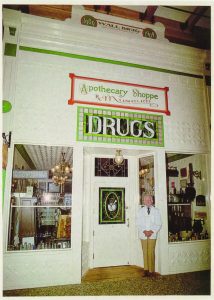 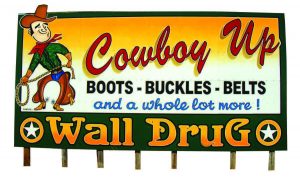 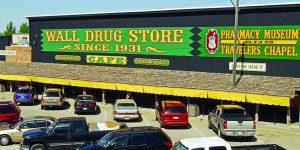 The sprawling attraction takes up more than half the commercial district on both sides of Main Street in downtown Wall. The Travelers Chapel is a recreation of an 1850s Trappist monastery. (Photo provided) 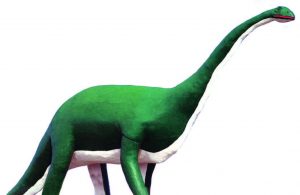 The 50-ton, 80-foot-long brontosaurus was built along the highway when Interstate 90 replaced the former Route 16A. The eyes light up to beckon travelers to take the exit to downtown Wall. (Photo provided)

She returned to the drug store. “I think I finally saw how we can get all those travelers to come to our store,” she told her husband. Ted later recounted her revelation. “What is it those travelers really want after driving across that hot prairie? They want water. Ice cold water. Now, we’ve got plenty of ice and water. Why don’t we put up signs on the highway telling people to come here for free ice water?”

Over the next few days, Ted and a local high school student put together some 12-by-36 signs modeled after the iconic Burma Shave roadside advertisements.

They spaced the boards along the highway, and before they even returned to the store, travelers were lined up at the counter for ice water. Ted and Dorothy scrambled to fill the orders, cracking ice from big blocks and working the well pump — Wall did not yet have running water. Some customers ordered ice cream or purchased odds and ends from the shelves. By the time the shop closed for the day, the Husteads were exhausted.

The following summer they hired eight helpers, and Wall Drug, now in its third generation of ownership, has never looked back.

The enterprise has planted more than 3,000 billboards since 1936, most along a 650-mile stretch of Interstate 90. Billboards dot the nation, with at least one in each of the 50 states.

The “geographic center of nowhere” — as the locals affectionately referred to Wall — had become somewhere. For some it is a destination in itself, not merely a blithe stopover en route to more interesting attractions.

The store’s success “taught me my greatest lesson,” said Ted. “There is absolutely no place on God’s earth that is godforsaken.”

Both the business and the town have grown over the years. Wall has nearly tripled in population and the Wall Drug complex has expanded to more than 75,000 square feet of commercial space; an indoor mall with outlets selling jewelry, western apparel, souvenirs and other merchandise; apothecary museum; 530-seat restaurant; one of the world’s largest private collection of cowboy art; and a variety of family venues with children’s activities.

Some of the attractions border on the tourist-trap kitschy: a 80-foot dinosaur with light bulb eyes to entice travelers when Interstate 90 replaced the old highway, a 6-foot rabbit, life-sized robot T. rex and giant jackalope.

Kids can dig for fossils, pan for treasures, enjoy a shooting gallery and try their skills on a mechanical bucking bronco. Wall Drug currently employs nearly 300 seasonal workers to handle visitors, whom can number more than 20,000 on a summer day.

The Husteads’ sprawling business now comprises a majority of Wall’s downtown. Municipal leaders are delighted. “We have the same sales tax revenue in this town of 800 people as some towns with 5,000 people,” effused former mayor Dave Hahn.