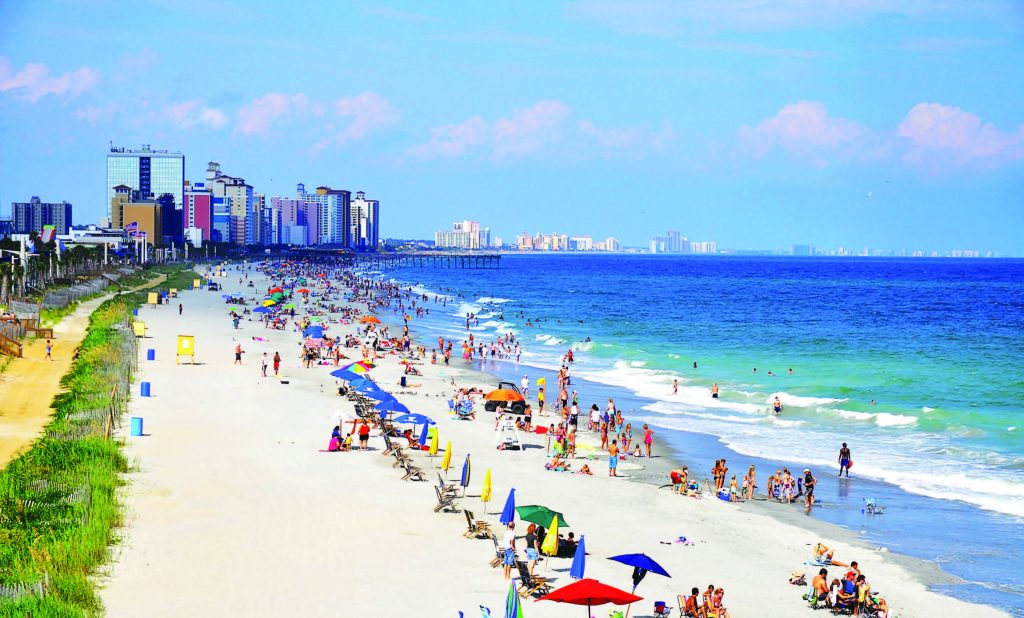 Hidden beneath Myrtle Beach, S.C.’s, shore and the ocean are four deepwater ocean outfalls that are designed to reduce flooding in the city by diverting water back into the ocean. (Shutterstock.com)

Floods and rising sea levels have been an increasingly difficult issue throughout much of the world. Already in 2018, several cities have experienced floods so bad that they were considered 50-year, 100-year and 500-year floods.

“Those seem to come more often than every 50 or 100 years,” said Mark Kruea, a spokesman for Myrtle Beach, S.C.

To combat flooding and other stormwater issues, Myrtle Beach installed four deepwater ocean outfalls — a stormwater system that transports rainfall 1,000 feet out into the ocean. The system runs underneath the beach and ocean.

“It takes the stormwater to where it is released into the ocean beyond a surf zone,” Kruea said. “It is diluted by the ocean. We also obviously then have a linear collection along the beach that gathers that rainfall and points it toward the outfall in that area.”

This system has effectively stopped flooding throughout Myrtle Beach, according to Kruea, and improved the ocean’s water quality while beautifying the beaches.

The water is improved by diluting stormwater past the surf area. The city also implemented debris and oil catchers into the outfalls to help prevent any unwanted or harmful materials from making it into the ocean.

The beaches are more aesthetically pleasing because Myrtle Beach eliminated the need for several above-ground pipes that once ran across the beach and emptied stormwater into the ocean.

“We had smaller pipes that would carry rain from the city straight to the beach,” Kruea said. “By building the deepwater outfall, we’ve been able to remove several dozens of those on-beach pipes. That allows us to carry the water beyond the surf zone.”

For as effective as the deep ocean outfalls are, it takes quite a bit of money and effort to implement one — let alone four. One outfall can cost anywhere between $6 and $20 million, said Kruea. The city of Myrtle Beach has spent roughly $50 million since the early 2000s to install its four outfalls.

Other cities, such as North Myrtle Beach, have also been able to implement several outfalls, but smaller neighboring towns like Surfside Beach, with a population of roughly 5,000, cannot aff ord to install one.

“They are expensive, but they do work,” Kruea said. “Anytime you’re moving Mother Nature where she doesn’t want to go, it gets expensive. The geography is fairly flat here, so we don’t have a lot of gravity to help make the rain go where we want it to. So we have to do most of this work underground and that gets expensive.” 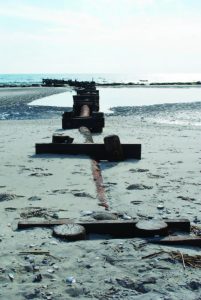 Myrtle Beach has installed deepwater ocean outfalls similar to this one in Cape May, N.J. This outfall tube was exposed in 2010 after a severe storm. Other cities along the East Coast have turned to outfalls to prevent or reduce flooding, with Myrtle Beach launching its outfalls after learning about their use in Virginia. (Photo by Michael Medina-Latorre/FEMA) 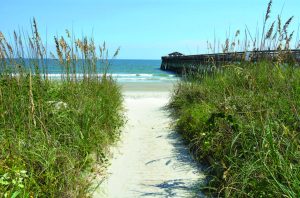 Myrtle Beach conducts regular water quality testing of the ocean and has discovered that water quality has improved since the installation of its four deepwater ocean outfalls. 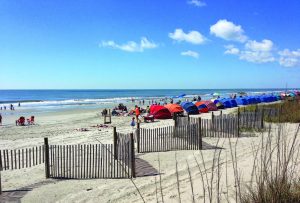 In addition to reducing flooding, the outfalls have beautified the beaches since they allowed for the removal of smaller exposed on-beach pipes. (Shutterstock.com)

“We’ve used regional stormwater retention ponds so that we could help smaller pieces of property by providing a regional system that would allow the collection,” Kruea said. “It’s called a lake basically, then you have a nice recreational amenity.”

Another issue when it comes to deepwater ocean outfalls is that they will only benefit communities that have large bodies of water, such as an ocean or a Great Lake.

In fact, Kruea admits that Myrtle Beach got the idea from communities in Virginia, which he believes came up with the idea for deepwater ocean outfalls.

“We’re not opposed to borrowing a good idea,” Kruea said.

Since Myrtle Beach has become more efficient at sending water into the ocean, he said they monitor the water levels and forecast frequently. So far, the city has not run into any issues. It also helps that Myrtle Beach constructs buildings farther from the water than it is required to.

Going forward, Kruea said that Myrtle Beach is in the preliminary engineering stages of adding a fifth outfall because they’ve been incredibly effective.

“We’ve virtually eliminated the flooding issues that we had after a heavy rain in the city,” Kruea said. “You had some neighborhoods that would fill up 20 years ago, and we’ve solved that problem with the changes that we’ve made to our stormwater system.”