Kosciusko County, Ind., underwent an intensive hazardous material drill in 2017. During the drill, it was determined that communications were a weak point that could hinder responses during the real event. Pictured, emergency responders with the Warsaw-Wayne Fire Territory in Kosciusko County evaluate a truck after it was struck by a moving train in July. (Photo by Maggie Kenworthy/Ink Free News)

No matter when disaster strikes or where an emergency occurs, the ability to deliver vital information to those who need it can be a matter of life or death. While municipalities have worked tirelessly to create multimedia platforms in order to communicate with their constituents, the technology used by their public service agencies is oft en incompatible, out of date and in need of an upgrade.

According to the Federal Communications Commission, radio systems currently being used by public safety agencies have a number of compatibility issues that make it very difficult for these entities to communicate and coordinate efforts in the event of an actual emergency. They are severely crowded, lack interoperability and have less than optimal transmission and reception quality as well as limited feature options. It is such an issue that the agency believes it is one of the most critical deficiencies in today’s public service communications. In many jurisdictions, these antiquated two-way wireless communications systems are not only overworked, but they are also unreliable. Not only are these jurisdictions unable to properly communicate on a daily basis, these systems are preventing them from planning for the future.

In August 2017, the Kosciusko County Local Emergency Planning Commission (Indiana) hired a private consultant to oversee a full-scale hazardous material drill in Warsaw, Ind. The drill scenario centered on a vehicle accident that resulted in a chemical spill, which created a plume of gas in the air and threatened to pollute a nearby creek. The consultant was to evaluate how well the agencies performed in three core capabilities: establish an incident command and announce an onsite commander within 10 minutes of arrival; to establish and maintain interoperable communications between all participating agencies throughout the incident; and to alert and dispatch personnel.

On the first and last points, the agencies were able to perform their duties without any challenges, but on the issue of communication, it became painfully obvious that a major change was in order.

“We knew our system was aging and was in need of an upgrade, but this really pushed us to revamp the system,” said Michael Wilson, fire chief for the Warsaw-Wayne Fire Territory.

It’s a big issue that is affecting communities throughout the nation. Many police and fire departments are married to their old analog systems, which no longer meet FCC mandates, are incompatible with digital systems and are susceptible to “dead zones.”

According to Warsaw Police Chief Scott Whitaker, the current single band VHF radios will be upgraded to a dual band 800/VHF Digital to improve critical communications within the city of Warsaw and throughout Kosciusko County. This upgrade will also allow direct communications with district and state agencies such as the Indiana Department of Homeland Security — a capability that they have not had before.

“We will also replace the current repeater system by consolidating into a single digital repeater on the Station 1 tower, which will include the ability to cross band 800 with VHF,” he said. “We see it down the road as a win-win because it will help us communicate more effectively on a daily basis and in the event of an emergency.”

In order to upgrade to the new system, the city of Warsaw opted to utilize a three-year lease to buy new Kenwood radio devices for the street department, wastewater department, cemetery, parks department, airport, police department and fire department. By coordinating their purchases into a bulk order through J&K Communications in Columbia City, Ind., they were able to take advantage of a two-for-one deal. The total upgrade will cost $383,866.21 and will be paid in three annual payments of $132,149.89. 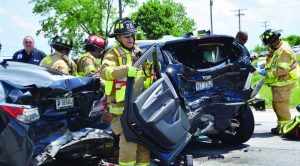 In response to the hazardous material drill’s findings, the city of Warsaw, Ind., is leasing new Kenwood radio devices for the street department, wastewater department, cemetery, parks department, airport, police department and fire department. Pictured, a firefighter with the Warsaw-Wayne Fire Department carries a door away from a vehicle as his teammates work to quickly extract a passenger involved in a motor-vehicle accident. (Photo by Maggie Kenworthy/Ink Free News)

According to a study conducted by David A. Dees with the Florida Department of Law Enforcement, one of the biggest challenges for those transitioning to a “trunked” communications system — a line designed to carry multiple signals simultaneously — is in training personnel on how to use it.

“All system users need to have a basic understanding of how the system functions, what talk group operates off of which tower and what the different tones and messages mean to the operator,” he said.

While field users can be trained in a group setting, it is important that dispatchers have a one-on-one session with a working console so that they can best be able to connect multiple talk groups, identify the caller by identification number and track active calls from a single computer screen.

Whitaker said he does not expect the transition to be easy, especially when most of the personnel have only worked with VHF.

“We know there will be some growing pains, but we are in the early stages so we’ll see how user friendly it will be as we work with it,” he said.

Wilson said training is even more of an issue on the fire department side of things because “when you have multiple bands inside the radio, it can be difficult to use.” He added, “By offering advanced training ahead of implementation, we can make sure that the guys have a better working knowledge of the system before we go live.”

Although these systems are complex and expensive, these upgrades not only meet the regulations set by the FCC, but also give public service agencies a leg up when an incident occurs. An up-to-the-minute, trunked communications system can change the outcome of a call in an instant. It is an investment that will be relied upon by citizens and a trusted tool for those who pledge to preserve and protect. By striving to mitigate any breakdowns in communication, you will give your agencies the ability to be the best and brightest your community has to offer and demonstrate that you have the public’s interest at heart.