The Highway 52 overflow bridge leading from Savanna, Ill., to Sabula, Iowa, was demolished for safety reasons and is currently in the process of being rebuilt. The bridge is the most direct route between the two cities. The Iowa Department of Transportation estimates approximately 2,000 people use the bridge each day. (By David L. Vollenweider – Own work, CC BY 3.0, https://commons. wikimedia.org/w/index.php?curid=22207536)

An extremely important main thoroughfare, the overflow Highway 52 bridge is “the main way across the river from Iowa to Illinois,” stated Chris Lain, mayor of Savanna, Ill.

It is also “the only highway that travels through Sabula,” added Troy Hansen, Sabula, Iowa’s, mayor.

In order to reduce the inconveniences caused by the reconstruction of the bridge, the cities worked together to get a ferry to run people and vehicles across the Mississippi River seven days a week. A shuttle service was originally offered by the Iowa Department of Transportation, but it was later discontinued due to a lack of interest, particularly after the ferry became operational.

Early on in the project the idea of a ferry was discussed; however, since it was projected to be a quick, six-week project completed before Memorial Day, a ferry was not financially feasible. When the bridge construction continued to get pushed back for weeks, then months, residents of both Sabula and Savanna began to push for a ferry.

Although an individual can see the other city from the river bank, the only detours available were far out of the way.

“Sabula is the midpoint between Dubuque and the Quad Cities,” Hansen explained. “In order to travel to Illinois, the closest point of crossing over is Clinton, Iowa. In order to get from Sabula to Savanna, one must travel the nearly 40-mile detour route. This adds about one hour of commute time for a trip that normally takes less than five minutes.” According to the Iowa DOT, approximately 2,000 people use the roadway daily.

Since Sabula is such a small town, many residents work across the river in Illinois or go to Savanna for goods and necessities. Manufacturers also use the bridge to transfer goods and Savanna would frequently lend emergency services assistance to Sabula when necessary.

When residents from both Sabula, Iowa, and Savanna, Ill., began to discuss the need for a ferry, the two mayors started working together to solve the problem. Pictured are Savanna Mayor Chris Lain, left, and Sabula Mayor Troy Hansen taking a trip across the Mississippi River on the ferry. The Iowa Department of Transportation ended up taking responsibility for the ferry, paying for the trips back and forth between the cities. (Photo provided by the city of Savanna, Ill.) 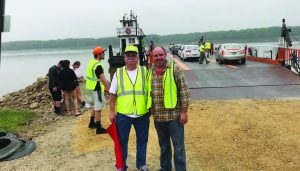 Cars begin to load up onto the ferry leaving from Savanna, Ill., to Sabula, Iowa. Pictured are Bill Hamilton, left , and Chris Lain, mayor of Savanna, Ill. The ferry will remain until the bridge reconstruction is completed or, if it continues to get pushed back, until the river freezes. (Photo provided by the city of Savanna, Ill.) 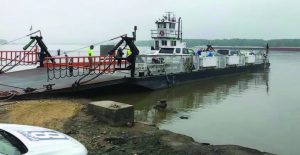 With the detours around the bridge reconstruction, a typical fi ve minute trip took an hour or more. The ferry helps to cut that time in half. It can carry up to 15 vehicles and 80 people per trip and runs nonstop for 12 hours a day, seven days a week. (Photo provided by the city of Savanna, Ill.)

As residents of both towns began asking for a ferry, state representatives in Iowa got involved. This then caused the Iowa DOT to become involved. “The ferry was put into service through joint efforts between the city of Sabula, the city of Savanna, Iowa DOT, Illinois DOT and the Calhoun Ferry Company,” Hansen mentioned.

Mayor Lain described how they “picked out ferry landing sites on both sides, and then about three weeks later the ferry was operational.” The city of Savanna has seven people on its side who manage traffic control along the river since it has both a recreational and industrial riverfront along with commercial fishermen.

In order to allow cars to pass on a road along the riverfront, Broderick Drive in Savanna had to be widened. Fences also had to be put up along the railroad tracks to keep people from walking along the tracks.

Lain mentioned that Savanna did have to pay for the work that went into its landing site. Both cities were willing to “do whatever is necessary to make this work.” However, the ferry itself is paid for by the Iowa DOT. All costs and payroll for the employees managing traffic control with the ferry are sent in and reimbursed 100 percent by the Iowa DOT as well.

The cities conducted a survey to determine the best hours for the ferry to run to ensure it was having the greatest impact since the Coast Guard will only allow it to run for 12 hours at a time. It runs from 6 a.m. to 6 p.m. Sunday through Friday and 8 a.m. to 8 p.m. Saturday. Between those times the ferry runs continuously with a trip across the river and back taking approximately 45 minutes. This equals between 13 and 14 trips every day.

The ferry holds approximately 15 vehicles and 80 people. “We get lots of bicycles and walk on traffic as well,” Lain mentioned. No commercial vehicles are allowed, however. Those who work across the river have learned to line up early in order to get a spot in line.  “Especially if you’re someone who works on a Saturday, you need to get there early,” Lain recommended.

In a positive way the ferry has opened up both cities to a variety of tourism opportunities. “This has been a positive influence on the city given the current situation of the bridge construction,” Hansen concluded.

Lain described a couple from England who had heard about the ferry and decided they had to ride it before flying back home. Motorcycles have also frequented the ferry, particularly during the weekends, for the scenic motorcycle rides on either side of the river.

Since the ferry simply runs continuously for 12 hours, one negative aspect is the inability to specify a set schedule for when it will arrive and leave each day. This can make the last groups lined up who are unable to fit on the ferry difficult to deal with when they must be told to take the detour.

As soon as the bridge reopens and is cleared for vehicle travel, the ferry will leave. If reconstruction of the bridge continues to be pushed back into the cooler months, then the ferry will leave once the river freezes. Currently the bridge is slated to reopen around Labor Day. “A lot of people fi sh in the area of the ferry landing. It will remain there but it won’t have a specific use,” Lain explained.