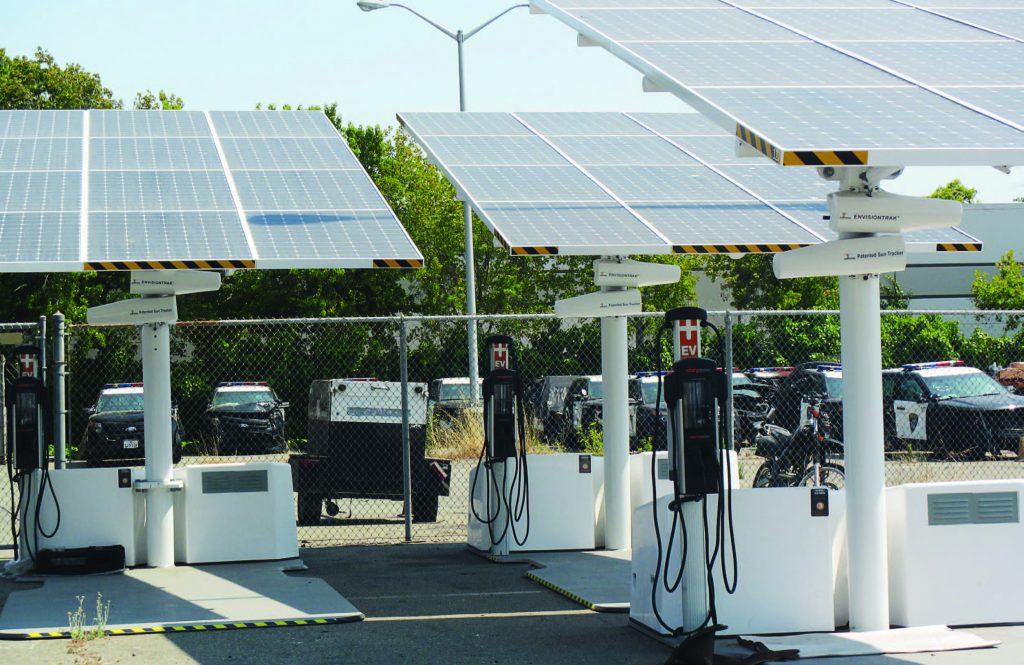 California is ahead of the ball when it comes to electric vehicles, with the state having directives to lower greenhouse gas emissions. These directives place special emphasis on the use of low-emission vehicles, and the state has particularly championed EVs by setting a goal to have 1.5 million electric vehicles on the road by 2025. Long before that goal was set, Oakland, Calif., had been pressing electric vehicles into service as far back as the ’90s. In fact, it is just one prong of the city’s four-prong approach to greening its fleet, with the others being the use of renewable diesel, compressed natural gas and its newest, hydrogen.

“We have a green fleet policy in place and we also have an environmentally preferable purchasing policy,” Richard Battersby, interim assistant director of Oakland’s bureau of infrastructure and operations, said, noting that the latter required the use of re-refined lubricants and specifically identifying biofuels, CNG, propane and electricity for consideration over petroleum fuels. “We also have an energy and climate action plan.”

The ECAP outlines a 10-year plan to achieve a 36 percent reduction in greenhouse gas emissions while also saving 24 million gallons of oil annually through driving habits, vehicle technology choices and infrastructure, including its “Engaging in Electric Vehicle Infrastructure Planning.”

Its electric fleet vehicles include 26 battery electric sedans, which are Nissan Leafs, and 63 hybrid-electric Toyota Prius Cs. For those who might have tried early battery electric vehicles in the ’90s and discontinued use, Battersby shared there have been many improvements since those early days.

“Electric vehicles charge more quickly,” he said. “They have a longer range and the batteries are more efficient. The regenerative braking technology has also evolved.”

Oakland’s 2017 Nissan Leafs have a 30 kWh pack, which gets an EPA-rated 107 miles of range. A full charge from a 240-volt Level 2 AC source takes around seven hours with the 3.6-kW charger and around six hours with the 6.6-kW charger.

But, as noted in last month’s article, “Getting your electric ducks in a row,” you can’t put the cart before the horse. Or as Battersby put it, “You can’t buy the vehicles until you have the infrastructure in place or else they sit. And you have to match the needs of those vehicles so they support their duty cycle.”

Getting that infrastructure in place can be challenging, and Battersby noted it is important to know where the vehicle will be parked. Additionally, he said, “In some jurisdictions, they might have permitting challenges. Some locations might require extensive trenching, which increases the cost.

“Figure out where the city vehicle is being charged, and once that location is identified, look at the existing electricity.”

Another consideration is whether or not a station will be accessible to the public, which would open the possibility of collecting fees. Battersby said smart stations are able to take credit cards or other forms of user ID information. “This makes the program self-funding,” he added.

Fleet managers will also want to make sure their stations are Americans with Disabilities Act compliant, Battersby said, adding with all the planning such considerations can fall on the wayside until a letter is received.

Oakland took a little-at-a-time approach to its infrastructure, with Battersby noting, “We did a couple a year whenever a grant would become available. We used the grant as seed money for the next infrastructure project.”

Funding is extremely important. Looking to take advantage of incentives and grants can help ease some of the costs of building infrastructure or even purchasing the EVs. Oakland secured a $500,000 grant to install 48 Level 2 charging ports and four DC Fast Chargers, and it has also installed four EV workplace charging stations. By partnering with Workforce Development on a $133,000 grant application, Oakland’s fleet has been able to install nine Level 2 chargers in city-owned parking facilities and garages; it plans to install an additional 10 yet in 2018.

“We have three self-contained solar electric vehicle charging stations on order, and what we understand to be the first rooftop installation at a parking garage, which was necessitated due to utilizing all the available power in the facility,” Battersby said. “The fleet secured $160,000 in grant funding for these efforts and received $280,000 in clean air vehicle rebate incentives for plug-in vehicle acquisitions, $30,000 for hydrogen vehicle acquisitions and another $330,000 for CNG vehicle acquisitions.” 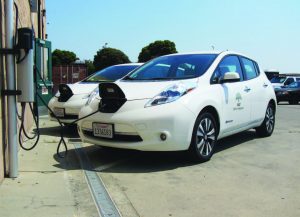 Driver training has been a key to success for Oakland’s EV program. As part of it, drivers have been trained to plug in their EVs after use. (Photo provided) 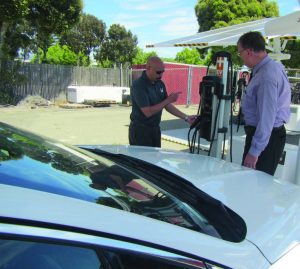 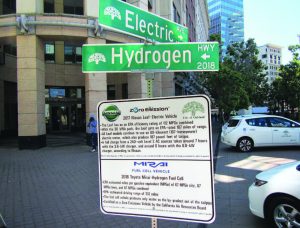 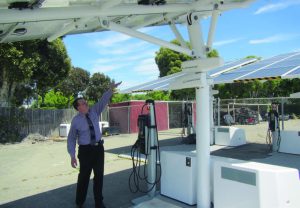 Interim Assistant Director of the Bureau of Infrastructure and Operations Richard Battersby feels the benefits of solar energy. While the units are expensive, they do guarantee that electric vehicles charged there are using 100 percent renewable energy. (Photo provided)

The use of solar charging stations is something Battersby is excited about, noting  that while the units are expensive, they also now guarantee that the vehicle being charged at the station is using 100 percent renewable fuel.

He encourages other fleets to do research and uncover what grants, incentives and rebates might be available.

“It’s a lot of work,” Battersby said of the process. “There are a lot of moving pieces that have to line up.”

For the most part, cities can get by with Level 2 chargers just fine. “If you are plugging in over night, Level 1 chargers are a less expensive option, but Level 2 gives more flexibility.” Battersby noted in Oakland’s case, “They are right at the fence. Employees and visitors can plug in during the day and then they move out and we plug in the city vehicles over night.”

Once the electric vehicles were in the fleet, Oakland also focused on its drivers, with Battersby stating, “There is a strong need for driver education. Mostly electric vehicles drive like normal (petroleum sedans), but they are just a bit different in how they drive and handle.”

Another part of the training dealt with the actual charging, mainly teaching drivers how to plug in the different types of EVs. “Each electric vehicle is a little different,” he said, adding, “We are also training them to plug in so it becomes a habit.”

As to the future of EV use, Battersby said, “Electric vehicles are on the rise. Will they supplant gas vehicles completely? I don’t know.” What he does know is that every vehicle manufacturer is offering a range of electric vehicle options. “Do it now or get stuck with it later.”