A lot of long-awaited goals for the little hamlet of Chappaqua — a part of the town of New Castle, N.Y. — is coming to fruition as the summer draws to its conclusion. In the spring of 2017, Boswell Engineering contractors broke ground on a 24-month construction project to beautify and update the streetscapes and sewer systems. It was a decidedly needed undertaking after several years of procrastinating and repairing old, outdated infrastructure.

“You know it’s a very historic community with very old infrastructure and then we have had many, many — almost decades — of repetitive sewer main breaks and water main breaks,” said Adam Brodsky, former deputy town supervisor who is overseeing the project.

While getting everybody to agree on something — especially something this expensive and time-consuming — was certainly an accomplishment in and of itself, the town was able to fully fund the undertaking.

In total, the estimated cost of construction is $11.6 million. Between community triple A-rated bonds and money saved, New Castle — the hamlet of Chappaqua specifically — fully funded its project. 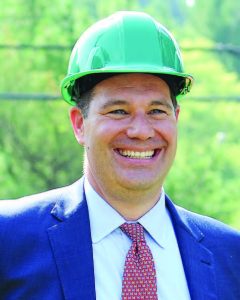 Adam Brodsky, board member of the Downtown Streetscape Committee and liaison to the New Castle Town Board 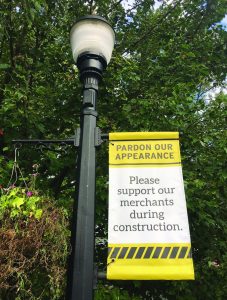 Residents and visitors were kept up to date on the project through New Castle’s website. Additionally, lamppost banners were hung around the hamlet of Chappaqua’s downtown, encouraging people to support local merchants during the construction. (Photo provided) 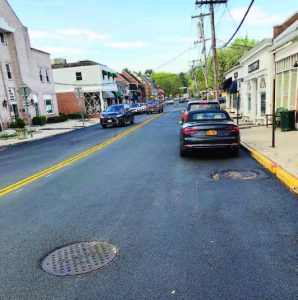 Replacing more than 1,600 linear feet of cement-lined, ductile iron water main pipes as well as 900-plus feet of connection pipes of varying diameter was a major part of the infrastructure and streetscape plan. They were replaced with 24-inch reinforced concrete piping as well as a new 915-foot twin DIP. (Photo provided) 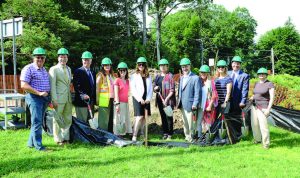 In the spring of 2017, New Castle and its hamlet of Chappaqua hosted a groundbreaking for the hamlet’s intensive infrastructure and streetscape project. (Photo provided)

“This is a project that we’re doing for the next hundred years,” Brodsky said. “Hopefully the infrastructure will last that long and that’s why we’re using high-quality materials — so that we won’t have to do this again soon.”

With the money allocated, the community in support of the project and the crumbling foundational systems in desperate need, contractors got to work.

The water system aspect of the plan included — but was not limited to — removing and replacing more than 1,600 linear feet of cement-lined, ductile iron water main pipes as well as 900-plus feet of connection pipes of varying diameter. It involved installing new valves and hydrants while also providing temporary water services. Construction crews also removed existing ceramic epoxy-lined ductile iron pipe and replaced it. This phase of the construction was completed in December of 2017.

Sanitary and storm sewer systems were also on the agenda. Crews implemented more than 700 feet of sewer laterals, new sewer manholes, castings and covers all while providing the community with temporary sanitary sewer service provisions. The 650-foot storm sewer system drainage trunks — with a diameter of 18 inches — were replaced with 24-inch reinforced concrete piping as well as a new 915-foot twin DIP. Catch basins, frames and grates for the community were also needed. Most recent updates indicate that these systems  are in the final stages of construction and should be completed by Labor Day.

Perhaps the most noticeable change in the small downtown area of Chappaqua was the roadway and streetscape beautification, which is still ongoing. Construction crews are resurfacing all the existing asphalt as well as full-depth asphalt pavement replacement in some areas. Traffic signals are being added to previously congested intersections. New granite curbing, concrete patterned and colored sidewalks are also being installed with brick paver trim. Decorative brick crosswalks and bluestones will make walking through the town a little nicer, too. Ornamental LED lighting, refinished benches, new trash receptacles, bike racks, seat walls and fencing will further enhance the town’s aesthetic. Finally, an information kiosk with planter boxes, new trees, tree grates and a large, decorative clock solidifies the changes and welcomes the community to its updated historic landscape.

“It’s going to be really spectacular,” Brodsky said, pointing to the updated pedestrian safety measures and other features being integrated to the downtown area.

The remarkable execution of such a big project may lead other communities to believe that this is an unchallenging endeavor, but the hamlet certainly has had its obstacles.

With such a tight space in which to work, roads would need to be closed, large crews would need to squeeze into fragile, historic areas and residents would become upset.

“We mitigated (issues) by doing almost all of the construction in the evenings so that we (didn’t) disrupt the businesses downtown or at least minimize it,” Brodsky said.

“Some of the other issues, though, are that when you do construction at night, it’s heavy construction with jackhammers and cutting. Then you’re disrupting residents who live in the vicinity who may be trying to sleep.”

Still, residents find the overall improvements worth the night work. In such a small, sleepy town, construction at night can include closing roads completely. Businesses aren’t open late and the crews can work for hours without the need to direct traffic or find strategic routes to worksites.

Once the work is completed, businesses will have the pleasure of a pedestrian – and automobile-friendly environment. New crosswalks with new signals, benches and sidewalks will make an already-charming area even more welcoming.

“We created a very large outdoor seating area that’s going to have bistro tables and chairs and allow people to congregate there,” Brodsky said. “We want to create a sense of community.”

The project website on New Castle’s webpage includes updates on the construction every other week as well as live maps of the town. New Castle — and the hamlet of Chappaqua, in particular — has a lot to be proud of and to look forward to in the next year.