There are — literally — some big things in Casey, Ill. The mailbox can garage a school bus. The golf tee towers three stories above the clubhouse and a grown man could lie across the tee’s head with neither head nor feet dangling over the sides.

The wind chime stands 56 feet tall, the birdcage can accommodate 10 persons and the 32-foot-long pencil could actually write if someone were strong enough to lift it.

Record-breaking creations are sprinkled throughout the town of 2,769 residents, and so many visitors gawk at the attractions the town council had to lower the speed limit on Main Street to 20 mph to avoid vehicle-pedestrian collisions.

Eight of the anomalies have been certified by the Guinness Book of World Records as the largest on the globe: the wind chime, mailbox, golf tee, rocking chair, knitting needles, crochet hook, wooden shoes and pitchfork. The 60-foot pitchfork is the first of its kind in the record books and by Guinness rules had to be at least 10 times larger than the average farm tool. 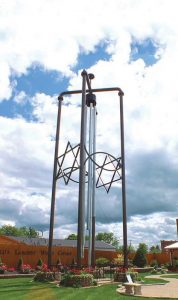 The wind chime was the first of the “big things” to be constructed in Casey, Ill. Jim Bolin crafted the record-breaking item to draw tourists from nearby Interstate 70. (Photo provided) 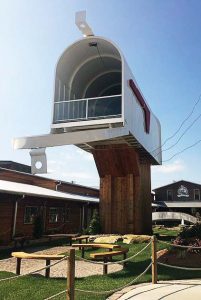 Up to 50 people can climb the stairs and look out over the town from the world’s largest mailbox. (Photo provided) 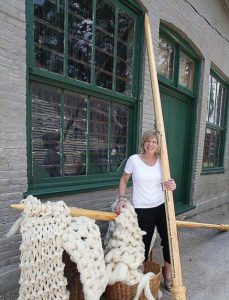 Jeanette Huisinga, owner of The Yarn Studio, stands with the world’s largest knitting needles and the stitches she muscled together at the local elementary school to qualify for the Guinness World Records. (Photo provided) 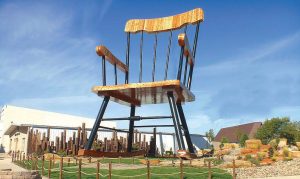 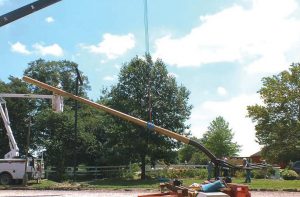 Workers from Bolin Enterprises are dwarfed by the 60-foot pitchfork as they install it on a farm property just outside of town. (Photo provided) 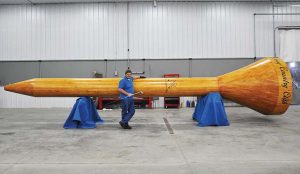 Jim Bolin, mastermind behind the “Big Things in a Small Town,” poses with the world’s largest golf tee. (Photo provided)

To qualify for certification the items have to be fully functional.

The 46,200-pound rocking chair actually rocks. The wind chime, with a robust pull of a rope, actually chimes. The door on the mailbox operates by a cable winch, and when a visitor slips a postcard into the receptacle inside the box, the oversized traditional red metal flag rises to alert postal carriers of outgoing mail.

The local post office has devised a special postmark for the mailbox and delivers up to 100 postcards a day.

Add a ninth record, albeit unofficial: The most world record items concentrated in such a small town.

Though not record setters, other larger-than-life structures include an ear of corn, yardstick, wooden coin, cactus, balsa wood plane and a Minion, the lovable character from the movie, “Despicable Me.”

The creations are the brainchild of Jim Bolin, who grieved seeing his town’s factories shut down and business owners shuttering their stores.

He pondered a way of attracting traffic off nearby Interstate 70, along which Casey is situated halfway between St. Louis and Indianapolis. His wife, Diane, had opened a tea shop in town and named it Whitling Whimsy after Jim’s grandmother Whitling.

Bolin was looking for something unique, Grandma had always been a fan of wind chimes and there was plenty of material lying around the grounds of family-owned Bolin Enterprises, an oil and natural gas pipeline maintenance company. So…

He did his research and set about using the company’s materials, tools and equipment to make the world’s largest wind chime across from the entrance of the tea shop.

The creation was unveiled in 2011 and immediately drew attention. Bolin constructed more items to promote tourism and help his beloved town.

“A lot of people came off the interstate to see the wind chime and shop,” said Bolin. “After we’d seen what it was doing for the community, we started thinking about other things we could build to help our town.”

Driven by his Christian faith, Bolin includes Scripture references on each creation appropriate to the item itself.

“It’s not a self thing or a company thing,” said the self-effacing Bolin. “We give our glory back to our God. We have faith in Him that this will help our small town.”

The pencil bears the inscription: “Let love and faithfulness never leave you; bind them around your neck, write them on the tablet of your heart,” taken from Proverbs 3:3.

The knitting needles cite Psalm 139:13: “For you created my inmost being; you knit me together in my mother’s womb.”

In 2013 Bolin gave the 14-foot knitting needles and crochet hook to Diane’s cousin, Jeanette Huisinga, owner of the once struggling Yarn Studio. The resultant foot traffic of visitors curious about the world’s largest knitting needles has allowed her to expand her shop into a second room.

“If it were not for the gift of these knitting needles, I don’t think I probably could have stayed,” she said.

The town of Casey has donated money toward the installation and maintenance of the attractions and promotes them on its website, www.cityofcaseyil.org.

Though logistically challenged by the influx of tourism, the town is understandably thrilled about the resurgence of downtown activity.

“These big things have put Casey back on people’s radar,” said City Clerk Jeremy Mumford. “Before Jim Bolin and his company put up these big things, there was no tourism in Casey,” he said, citing with gratification five out-of-state cars parked on the street outside his office window.

Bolin’s daughter runs a website, www.bigthingssmalltown.com, with information on each item and a map of their locations.