↓
Home→Streets, Highways, & Bridges→Waste not, want not when it comes to road care 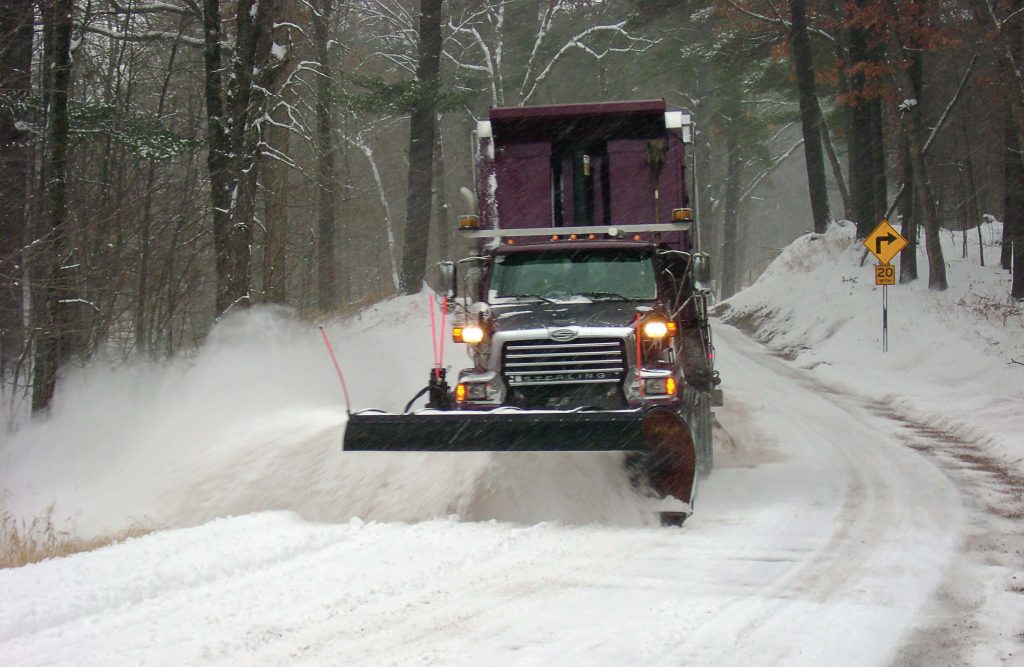 As municipalities seek to lessen salt usage, more might be drawn to byproducts in their own backyards. Polk County Highway Department has been mixing cheese brine with salt and sand since 2008. (Photo provided)

As cities across the East Coast saw record-setting snowfall last winter, salt mines struggled to keep up with the demand for rock salt to clear roadways.

The tried-and-true product not only melts the snow, but deices roads and provides a level of safety necessary for municipalities to operate on a daily basis during cold winter months. While the benefits are apparent, the toll the use of rock salt takes on the environment has lasting effects. So, what if there was another way to provide the same service, or at least make the current supply of rock salt last longer, without further harming the environment, all while saving local governments a few dollars?

“Being in Wisconsin, cheese is obviously a large local industry,” said Emil Norby, Polk County Highway Department’s highway commissioner. “Back in 2008, we started looking for alternatives to salt for deicing and snow control. We couldn’t afford our own brine maker, so thought up the idea to partner with a local dairy that soaks its cheese in brinewater. After the salinity was tested and it was determined it would probably work, we decided to give it a try.”

During winter 2008, the county tested the solution and found that adding the brine to salt or sand in the spinner before it’s released saved it 30-40 percent of salt usage. Norby said this is because the brine thins the solution and allows the salt to activate faster, which ultimately saves the county product and is helpful with budget.

“When you use rock salt in the traditional sense, you’re losing at least 30 percent of what you’re putting on the roads,” he said. “You’ve got to remember you have salt that bounces off the roads, falls into ditches or gets kicked around before it takes effect. We really wanted the salt to be more wet so it would hit the road and stay there, and this seems to be the solution.”

While rock salt has been the primary mode of deicing and winter roadway control since the 1950s, the environmental trade off has been front of mind for environmentalists in recent years.

According to an LA Times article, Xianming Shi, an associate professor of civil and environmental engineering at Washington State University who has researched environmentally sustainable and cost-effective winter road treatments for more than a decade, said impacts of rock salt usage include killing vegetation along roadsides, corroding steel bridges, concrete pavement and cars and high levels of salt in groundwater.

“The challenge has been for highway agencies or local road agencies that they really cannot stay away entirely from chlorides (salt), because that’s the cheapest solution,” Shi said in the article. “In the short run, the focus has been how to use less chloride without sacrificing level of service.” 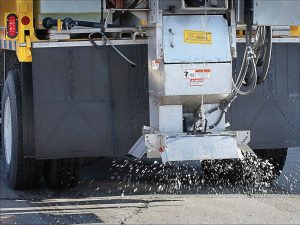 Polk County Highway Department uses between 20,000-35,000 gallons of brine per winter season. It has found a ratio of cheese brine to rock salt that prevents it from clogging up the machines. (Photo provided) 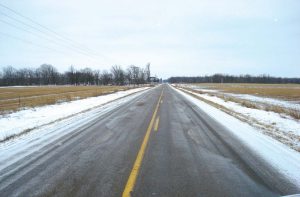 Pictured are roads in Polk County, Wis., that have been treated with a cheese brine mixture. (Photos provided) 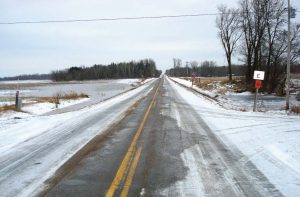 Pictured are roads in Polk County, Wis., that have been treated with a cheese brine mixture. (Photos provided)

Polk County, Wis., looked to a local dairy as it tried to lessen its salt usage each winter. By creating a mixture of cheese brine and salt or sand, Polk County has saved 30-40 percent on its salt usage in 2008. (Photo provided)

That’s where municipalities have turned to byproducts.

Not only do they tend to be environmentally friendly and biodegradable, a partnership can typically be worked out where both entities benefit, and the waste material helps the rock salt supply stretch longer.

“The cheese brine itself can’t be used alone,” Norby said. “It doesn’t act as a deicing agent, it just allows us to use less salt per road than we used to. It stretches the supply so we can be more efficient, lose less product and recycle the waste in a useful way.”

Polk County isn’t the only entity taking advantage of local waste products on its roadways. Lincoln, Neb., uses beet juice. A company in the United Kingdom specializes in taking plastic from landfills and melting it into pellets that can be used to fill potholes. Research is being conducted to see how vodka can be used as a deicing agent.

“I’ve gotten calls from as far away as Germany, Canada and all over the U.S. wanting to know how they can utilize their local byproducts,” Norby said. “They want to know how they can get this to work in their neighborhoods so that goes to show this is something we’re all thinking about.”

As far as challenges, Norby said the transition from traditional rock salt to the cheese brine-rock salt mix has been fairly smooth. The county currently uses between 20-35,000 gallons of brine per winter season, depending on the severity of the weather.

“We’ve not had any negatives in the process, really,” he said. “We’ve learned the ratio of cheese brine to rock salt to keep our machines from clogging, and luckily we haven’t noticed any molding or smells from the brine. The toughest part has probably been driver education, but they’re noticing the impact the brine makes and they’re on board.”

No matter how hard he tries though, Norby can’t avoid the jokes from surrounding counties.

“I mean, we’re in Wisconsin and we’re using cheese on our roads — getting ripped on for that is to be expected. But we can handle it.”