Pictured is a rendering of Sandy Springs, Ga.’s, new city hall, which also includes the Sandy Springs Performing Arts Center. Like much of its operations, the project was completed using public-private partnerships. (Photo provided)

Most cities cultivate partnerships with the private sector in one shape or another, whether they are seeking private sector bids for a construction or repaving project or outsourcing IT services. Sandy Springs, Ga., meanwhile, is taking public-private partnership to a new level by embracing a P3 model of government, which has seen much of its city services outsourced to the private sector. A trailblazer in more ways than one, Sandy Springs has set an example many other fledgling Georgia cities are following.

“P3s are our claim to fame,” Sandy Springs Mayor Rusty Paul said. “It started when we started the city in December of 2005. We had the opportunity to rethink how we wanted to provide city services.”

Of those possibilities, one was the traditional approach in which the city of Sandy Springs would hire employees and set up departments. The second approach would be the adoption of a public- private partnership model; for this approach, the city first had to establish whether or not there would be enough private-sector bidders in order to create a truly competitive marketplace that would enable the city to secure the best price and value. The third approach was a combination of both methods.

“We leaned toward the total P3 model but decided to keep public safety traditional,” Paul said, noting while the city maintains police and fire departments, it does outsource its ambulance service.

In fact, beyond police and fire, the city only has eight employees: the city manager, two assistant city managers, the city clerk, the city manager’s executive assistant, finance director, court administrator and the human resources director. While this might leave the impression that city hall is a vacant space, Paul noted Sandy Springs’ city hall is like walking into a beehive with about 135 people all working.

“We’ve been doing this for 12 years, and it’s worked extremely well for us,” Paul added. Communication has been key to that success, with Paul noting operations are seamless because everyone reports to the city’s senior management, including the city manager and the assistant city managers.

While not all cities take P3s to the level Sandy Springs has, Paul said it’s not that major of a leap, especially since cities are already used to managing contracts and working with contractors. P3s have brought another benefit to the city of Sandy Springs, largely thanks to the rebidding every five years.

“What city every five years out requests to have its operations accessed from top and bottom?” Paul asked, noting through Sandy Springs’ rebidding process, it does just that: Asking members of the private sector to access city operations from top to bottom for free, with the key question being “How could you do it better?”

With 12 years of using P3s under its belt, Paul said the city has held the costs of government services in check, even reducing them by 10 percent. There were some concerns through the rebidding process that costs would increase; however, Paul said, “The costs are coming in lower. We’re staying fairly close to even because of competition.” 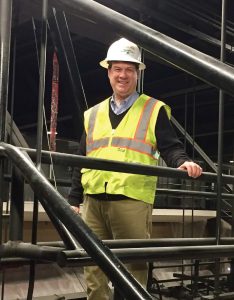 Mayor Rusty Paul checks out construction work at the new city hall. The project wrapped up on schedule and within the city’s budget. (Photo provided) 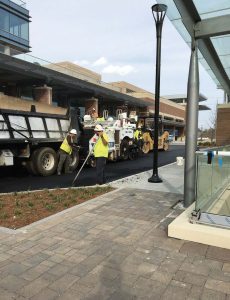 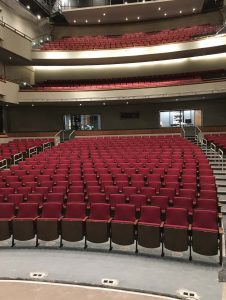 The operations of the performing arts center will be run by a private company in keeping with Sandy Springs’ history of utilizing public-private partnerships. (Photo provided) 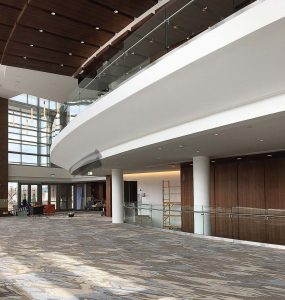 With $1 million in contracts available, potential contractors have to show Sandy Springs how they can do things better, which encourages bidders to pursue innovative and new solutions that increase the efficiency and cost-effectiveness of city government.

With this long history of outsourcing, it’s not surprising Sandy Springs once again turned to the private sector when it came time to create a city hall and, by extension, an anchor for a freshly created downtown — a step many newly minted Georgia cities are taking.

For Sandy Springs, the project includes not only a city hall but also a 1,100-seat performing arts center, which will be managed by a private contractor, a smaller theatre that can also double as a location for city council meetings, an on-site park and a mix of residential and retail components. City hall will also be able to adapt to future technologies.

Paul noted it can be a struggle for cities stay on top of technology changes. “Technology is developing so rapidly. The private sector is so much better with technology, and they are incentivized to bring (the latest technology) to us. It keeps us on the cutting edge.”

Partners for the project included Carter/Selig; Rosser International; jB+a; Holder Construction; and Spectra. Paul said contractors kept the project on schedule and within the budget, two aspects incentivized by the city with bonuses and fines.

“The private sector gets it; they work with budgets,” he said.

The city council approved the site development plan for the project in September 2014, and the ribbon cutting for the new city hall was held May 7, 2018.

Paul noted Sandy Springs’ approach isn’t for every city, particularly for well-established legacy cities; however, even if a P3 model like Sandy Springs is not possible, Paul said incentivizing city employees can prove just as beneficial as incentivizing public sector partners.

“What innovations have (employees) been sitting on? If you give the right incentive and actually ask them what they could do better, you might be surprised,” Paul said. “If you let them (city employees/departments) bid on projects, you will find they are a fount of information and ideas.”

Looking through a P3 lens can bring value to the community as whole, providing a platform for city employees to be innovators, better serve residents and be fiscally inventive while not losing quality.

“It is valuable to reexamine your approach and look through a P3 lens,” Paul said.