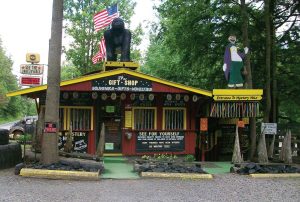 The entrance to The Mystery Hole still sports the kitschy design and trappings popular with the roadside attractions of yesteryear. (Photo provided) 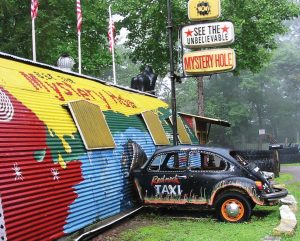 The remnants of a Volkswagen Beetle ostensibly crashed into the quonset hut is just one of the intriguing oddities on display at The Mystery Hole. (Katherine Bowman via Flickr, creativecommons. org/licenses/by/2.0/) 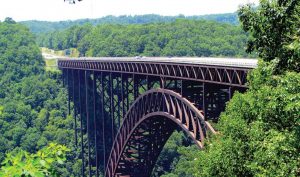 The New River Gorge Bridge, one of the world’s longest and highest steel arch bridges, spans the New River in the Appalachian Mountains a few miles southeast of The Mystery Hole. (bobistraveling via Flickr, creativecommons.org/licenses/by/2.0/) 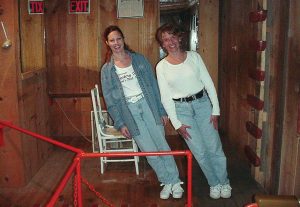 Two patrons of The Mystery Hole near Ansted, W.Va., seem to defy the normal laws of gravity. Whether natural laws are actually suspended or whether the room is just cleverly constructed is a question the attraction’s owners prefer to remain unanswered. (Photo provided)

Is the Mystery Hole just outside of Anstead, W.Va., a unique location where the laws of gravity have somehow gone haywire?

Or is it merely a cleverly constructed subterranean attraction designed to make visitors think so?

The real answer is one owners Will and Sandy Morrison are disinclined to divulge.

“You just have to see it to believe it,” Sandy said cryptically, and Will claims to have turned down several million-dollar offers to reveal the secrets of the Mystery Hole.

Some of the weird phenomena include people appearing to stand on a slant, balls rolling uphill and furniture precariously balanced at impossible angles.

“This believe-it-or-not astounding experience has intrigued many people both young and old over the years,” touts the website, www.mysteryhole.com.

“Many come time and time again just curious to know if they really did see what they thought they’d seen, or if their eyes were playing tricks on them. Yet some have gone away so bewildered they’ve headed in the wrong direction and became lost. Very often keys get locked in the cars because the occupants are too anxious to see the Mystery Hole and experience the laws of gravity in action.”

The website even issues a lighthearted warning to visitors.

“You may not be able to contain yourself in the usual manner or refrain from making comments such as, ‘It made my day,’ ‘I just love it,’ or ‘It stopped my headache.’

“One lady said it changed her husband from an old grouch to a nice, sweet person, and some have even complained the admission price is too low and insisted on giving a tip.

“If at this point your heart is picking up tempo and you feel an urge to explore something very interesting and different, just drop everything right where you are, load up the family, friends and enemies and go for it. You’ll see, feel and hear some of the most unusual things as you coast along on this short, sweet trip that will intrigue you for the rest of your life.”

Carnival barker rhetoric aside, one of the site’s conspicuously posted rules is meant to be taken seriously: “People with heart ailment, vertigo or high blood pressure: Do not enter.” A disclaimer follows the caution: “Not responsible for accidents of aftereffects.”

The Mystery Hole is one of a dwindling number of holdovers from the era of kitschy roadside diversions back in the day when gasoline prices were reasonable and automobile travel reigned supreme.

The site’s kaleidoscopic jumble of colors and incongruous images match the delightful hyperbole of the attraction’s website. Depictions of a clown and black bear greet visitors to the rainbow-colored quonset hut and the adjoining gift shop and a Volkswagen Beetle is placed so it appears to have crashed into the building.

“We are only two miles from Hawk’s Nest State Park,” said Sandy. “This whole area is for tourists.”

Sandy said “thousands and thousands” of visitors have enjoyed the Mystery Hole during the Morrisons’ tenure, now in its 20th season. They bought the place in 1999, becoming the second owners of the attraction “discovered” by Donald Wilson in 1972. He closed the Mystery Hole in 1996 and died shortly thereafter.

For years the property was subject to vandalism and deterioration and the Morrisons invested a substantial amount of resources and elbow grease into restoring the site while preserving the character some have described as “cheesy, tacky, corny, authentic and as a result utterly brilliant,” according to Yelp contributor Donal F.

Nearby Ansted, with a population of 1,404, does its share in promoting the attraction and benefits in return from tourists heading into town for gas, food and lodging.

The 15-minute guided tours are $7 for adults and $6 for children 11 and under. The Morrisons will open the attraction on their off days for tours of 20 or more visitors.

The attraction is open Memorial Day, Fourth of July and Labor Day.

The Mystery Hole is currently up for sale, according to Sandy. “We do well,” she said, but noted it was time for her and Will to move on.