↓
Home→Maintenance and Operations→When you find a good thing, run with it

Whether it’s a summer festival that can’t be beat, a restaurant that’s the envy of surrounding states or a unique tradition that residents embrace and love, half the fun of living in a community is taking whatever it is that community does well and running with it.

Holland is a small midwestern town with deep Dutch roots situated in southwest Michigan. Nicknamed The Tulip City due to an estimated 5 million tulips planted across town, residents and city officials alike embrace the nickname and have even branded a festival in its honor.

“Holland’s roots are really found in the Dutch settlers who founded our city, and the festival is a nod to that history,” said Susan Zalnis, the marketing and public relations director for Holland’s Tulip Time Festival. “The festival started in 1929 when a schoolteacher presented the idea of planting tulips in honor of the city’s heritage. That year, the city council approved about 100,000 tulips to be planted across town, and that has continued to expand ever since.”

Today’s Tulip Time Festival is a massive ordeal that draws crowds of more than half a million — the nine-day event features authentic Dutch food, a Dutch market with handmade crafts and goods, more than 50 Dutch dance performances with more than 700 dancers in authentic garb and a variety of local attractions.

Although the festival’s namesake is for the popular flower, the impact of Dutch culture as a whole is apparent throughout the city.

“Holland really capitalizes on the tulip and Dutch theme,” Zalnis said. “You’ll find Dutch influences in artwork across town, statues in gardens and even structures. The windmill at Windmill Island is not only a huge tourist attraction, but is actually one of the last authentic operational windmills to leave the Netherlands, and it lives right here in our city.”

Tulips are not to be forgotten, however.

“We’re very famous for tulips, and that’s something we take great pride in. Holland has won awards year after year for how beautiful and well-maintained our gardens are, and that takes work yearround,” Zalnis said.

Meanwhile, across Lake Michigan, nobody knows year-round work like the farmers of Viroqua, Wis. Th e town is tiny — the population as of the 2010 census is just over 4,000 — but what they’re cooking up has made a huge wave in the food industry.

Vernon County — home of Viroqua — has one of the highest concentrations of organic family farms in the nation. Viroqua itself has one of the largest farmer’s markets in the state, with more than 60 seasonal vendors and a packed house every weekend.

“More than 30 years ago, a group of farmers wanted to focus on small-scale organic family farms with high standards and created (what is now known as) Organic Valley right here in Vernon County,” said Nora Roughen-Schmidt, executive director of Viroqua Chamber Main Street. “As the demand for organic products grew, new businesses were able to be established and flourish due to the creation of Organic Valley right in our own backyard.”

Numerous eateries in the town tout national awards, and the products produced on locally owned and operated farms are sought after across the nation.

“We have a number of award-winning organizations and businesses, and they exist because Viroqua is a community that values farmer-supported business and high-quality, local products that are traded fairly,” Roughen-Schmidt said. 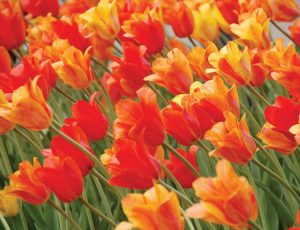 Holland, Mich., has embraced the legacy left by its Dutch founders, fi rst planting 100,000 tulips in 1929. Since then about 5 million tulips have been planted across town, and the city has also incorporated other Dutch influences into its cityscape. (Photo provided) 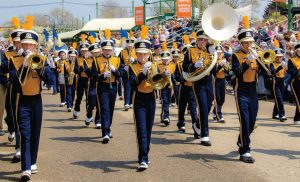 A marching band performs in the Tulip Time Festival, which draws in crowds of more than half a million. (Photo provided) 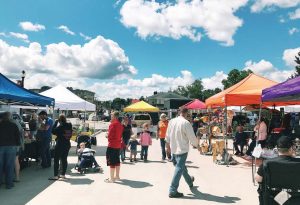 Viroqua, Wis.’s, food scene has landed it on the map as a destination. Its farmer’s market is one of the largest farmer’s markets in the state, with more than 60 seasonal vendors and a packed house every weekend. (Photo provided)

A number of award-winning organizations and businesses call Viroqua home. The community’s commitment to farmer-supported business and high-quality, local products that are traded fairly has helped these businesses thrive. (Photo provided) 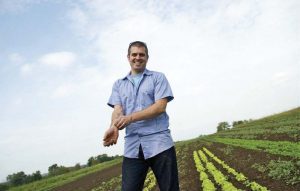 Driftless Cafe — owned by husband and wife duo, Ruthie and Luke Zahm — brought Viroqua great notoriety after it was nominated for a prestigious James Beard Foundation award. Pictured is Luke, who is also the cafe’s chef, visiting a local Wisconsin field. (Photo provided)

As time has gone on and the desire for organic, farm fresh foods has swept the nation, Viroqua’s prevalence in the food industry has grown tremendously.

“We are aware of tourists traveling to the area, savoring local food from family farms and spending their nights in town enjoying our colorful community,” Roughen-Schmidt said. “There are nights in Viroqua during tourist season where streets are lined with visitors from Minneapolis, Chicago, Madison, Milwaukee and the likes.”

One of the town’s most popular eateries — the Driftless Café — brought great notoriety to the area after being nominated for a prestigious James Beard Foundation award.

“The secret about our fantastic little community is out,” Roughen- Schmidt said. “Food has put Viroqua on the map in a very important way and created a destination. It’s something we’re very proud of and the reach has been tremendous.”

So, how did they do it? How does a town carve a niche for itself and capitalize off of that?

“I think in Viroqua’s case, it was a bit of a domino effect,” Roughen-Schmidt said. “Organic Valley founders took the risks and those risks became a catalyst for new business and other cooperatives. Us locals, we choose to live in this small-town paradise because of the abundant resources at our fingertips.”