Those most surprised by Fargo, N.D., winning the Georgetown University Energy Prize were those who had worked so hard to make it possible.

The idea got started when Malini Srivastava, architect and project leader, noticed that most existing buildings are energy hogs and wanted to come up with new and innovative ways to fix the problem. “No one expected Fargo to be the winner,” she mentioned. 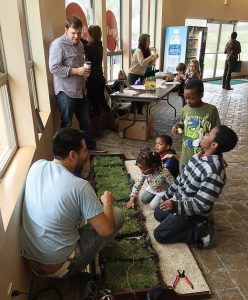 One of efargo’s interactive, family-friendly activities was the earth piano at Party for the Planet held at the local zoo. (Photo provided by efargo) 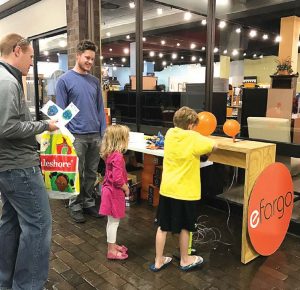 Throughout the two-year competition, those working at efargo came up with a variety of games to get the community involved with saving energy while also showing them ways that the average household could help. (Photo provided by efargo) 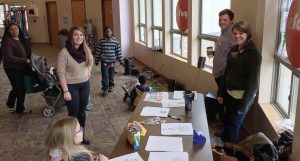 At the Party for the Planet at the zoo, children were invited to help choose and color the villain (shown right) of one of efargo’s most popular games, Waste-A-Watt. (Photo provided by efargo) 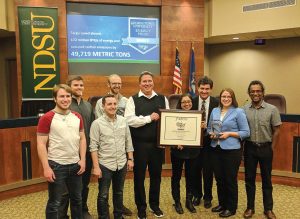 Those instrumental in helping Fargo, N.D., win the Georgetown University Energy Prize are shown with the award plaque. The city was able to save nearly 172 BTUs of energy and reduced carbon emissions by 49,719 metric tons. (Photo provided by efargo)

Working as a team

In order to start brainstorming new ideas, Srivastava approached city officials and asked them to consider participation in the two-year competition. The city of Fargo, North Dakota State University, North Dakota Department of Commerce and the local school system teamed up to begin formulating new ideas. The goal was to not only “impact buildings, impact people but also impact policy,” Srivastava said. This allowed the fields of policy, practice and innovation to come together for the common good.

The various people involved in the project all had very clear roles, which helped to optimize the partnerships. “Each agent took on a part in the continual collaboration. One of the reasons for the success was collaboration across agencies,” Nicole Crutchfield, Fargo planning director, explained. “Through the partnership we came up with different strategies.”

These strategies allowed the team to decide on a stated declaration, which was necessary for the competition, so that its design was both qualitative and quantitative.

The utility companies, Xcel Energy and Cass County Electric, were also brought in so that the city could get energy numbers that could be used to help visualize the data. “Part of the hard work with the team is working with utility providers and engaging with them to curate data and get it into accessible form so we have something to measure against,” Crutchfield stated. This led them to target ways in which schools and residences specifically could lower their energy usage.

Comparing its own municipal building’s energy usage to regional and national benchmarks allowed the city to participate in saving energy as well. Building assessments were performed and energy-efficient renovations were suggested with schools choosing to make some renovations on their own. This also helped to identify policies that may need changed, for example, facility management. Participation in the competition allowed the city to look at the purpose and efficiency of policies and, according to Crutchfield, “bring knowledge and technology to influence codes and practices.”

Instead of simply passing out pamphlets, the team created games to encourage community participation. The city had already shown itself to be motivated with a variety of programs so finding spots in community events did not prove to be difficult. At these events, team members would have residents play the games first, adding an extra element of fun, before discussing ways to drop energy usage. “First play the game, then engage them in conversation,” Srivastava noted.

The online game, Waste-A-Watt, became one of the team’s best programs. In the game, the player tags a building with energy waste and then solves various problems in order to catch Waste-A-Watt, the villain. Designed to engage both children and families, this program taught residents “how to change behaviors in a fun and engaging way,” according to Crutchfield. This allowed the team to collect data, design different games and strategies, implement them to see how they worked and then come back to the data again so that the community can see the results and the difference they are making in their own community.

Crutchfield suggests that it was so many agencies working together successfully that really helped them to win the competition. The city is “used to having to collaborate to get things done,” Crutchfield mentioned, which may not be the case with other cities. The leaders in each field created and achieved common goals and brought the community along with them in their successes. With so many people working together to better the town, it helped to raise morale.

“It showed that we can locally solve big problems,” Srivastava said. “The people power matters the most.”

Plans for the future

A large opportunity that Crutchfield noticed was the lack of awareness with technology. Th is allows the team to focus on opportunities for more training and keeping up with the latest technology while being able to adapt and learn the skills necessary to adapt the use of technology. Therefore, integrating day-to-day energy-efficient practices and improvements that can benefit the average homeowner is an ongoing goal.

Winning this competition has given them access to more financing, more education on components of energy efficiency as well as help from experts in the field. A K-12 challenge has been created in which they are taking the knowledge they gained from this competition and sharing it with neighboring towns. The team has a new game in the works that is designed to specifically help lower income families.

Srivastava confided, “My sense is that it will only get bigger and better.”