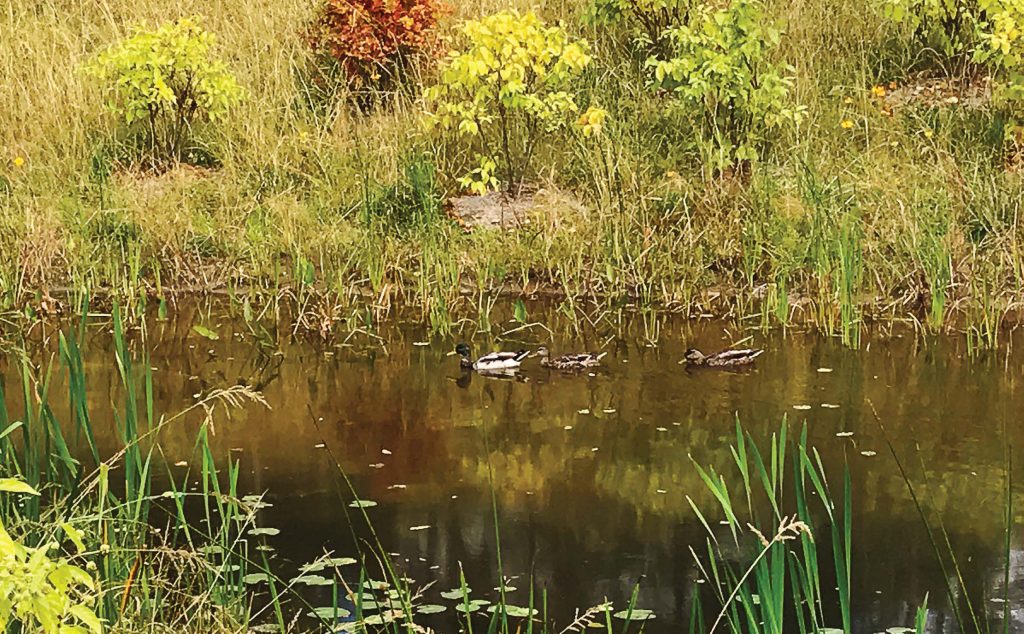 Wildlife soon moved into the neighborhood thanks to a created wetland in Albany, N.Y. This wetland was created to mitigate decades of flooding in the Hansen Avenue neighborhood of Albany. (Photo Provided)

Often when we hear about wetlands being restored or developed one thinks it’s for the conservation of wildlife, and while that might be true, the creation of wetlands has numerous benefits for cities and towns.

According to the Natural Water Summary on Wetland Resources by Mary Kentula, with the U.S. Environmental Protection Agency, there are three types of wetlands: natural, enhanced and constructed.

Natural wetlands are those that have been allowed to remain in their natural state despite development around them. Over the past few centuries, many natural wetlands were drained to accommodate human habitats, changing the migratory pattern of birds and changing local climates. 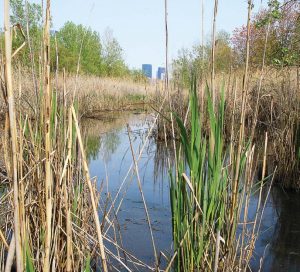 This “accidental wetland” occurred naturally next to a turnpike in Jersey City, N.J. This is one of the accidental wetlands that Dr. Monica Palta, an assistant professor at Pace University in New York City, has studied. (Photo provided)

Enhanced wetlands are those that have been restored or altered in some way to provide shelter for a particular species of birds or other wildlife. A constructed wetland is one that was created where one wasn’t before. Created wetlands are usually constructed to mitigate flooding issues or to treat wastewater or agricultural runoff.

A fourth type of wetland being studied by Dr. Monica Palta is what’s being called an “accidental wetland.” Palta, an assistant professor at Pace University in New York City, said, “In general, most cities have a big chunk of abandoned land that progress into natural systems.”

For example, in Detroit foreclosed properties became urban meadowlands as wildlife took over the abandoned properties. But she said most cities have water they need to get rid of and need a place to divert the water into. In Phoenix that is the dry bed of the Salt River while on the East Coast it was a large train yard and a multi-use area that became a dumping ground for the turnpike.

Accidental wetlands are fed by different water sources — precipitation, runoff from upland areas and discharge of treated wastewater. In accidental wetlands vegetation is naturally appearing. “Seeds are constantly being transported” by the wind or birds, Palta said; and if the plant is conducive to water, it will hold. To designate a wetland, Palta said it needs to have three criteria: plant life — two common wetland plants are cattails and phragmites — certain soil processes and water that stands for at least two continuous weeks.

“Accidental wetlands provide ecosystem services such as nutrient removal, heat mitigation, recreation and enjoyment, carbon sequestration, water storage, groundwater recharge and provision of wildlife habitats. They are formed not through deliberate restoration or management activity but as a product of land use and water infrastructure decisions by municipalities,” according to Palta in a paper written for Frontiers in Ecology.

Whether a municipality should encourage accidental wetlands is “contingent upon the type of service or disservice it might provide and whether it causes more of a benefit or a nuisance,” she said. One concern could be that the accidental wetland is breeding disease or mosquitos; however, Palta said studies have been conducted that show backyard containers are more of a breeding ground than wetlands.

Her studies have also shown that these wetlands do provide beneficial services, but she cautioned against a blanket approval for this type of wetland.

“They certainly require a different set of conditions than other wetlands but are certainly worth taking the time to evaluate,” she said.

In Phoenix, the dry Salt River bed — abandoned when water was diverted to reservoirs — is being utilized by those in the neighborhood and some homeless people as a place to get respite from the heat. She said that is a great benefit of these wetlands, but signage should be posted to not come in contact with the water, particularly after a rain event.

Palta said, when she first began her study, she didn’t expect to find any type of beneficial function so it has been “very encouraging to see that the ecosystem is functioning naturally — plants are thriving and the soil starts behaving like wetlands and its choosing to do it on its own.” 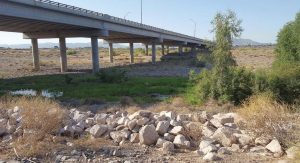 The dry Salt River bed becomes an accidental wetland when water collects there after a rain event or from runoff. Dr. Monica Palta has been studying this accidental wetland to see if the ecosystem is functioning and was pleasantly surprised to find that it is without any assistance. Locals come to this area to get some shade and respite from the Arizona heat. (Photo provided) 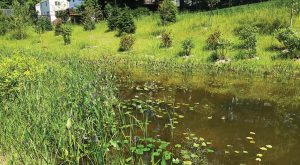 This is the created wetland in Albany, N.Y., in August 2017 — just six months after construction was completed and four months after plantings. Commissioner Joe Coffey remarked that already at this point the wetland looked as if it had always been there. (Photo provided) 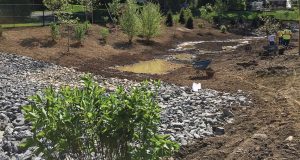 Construction of the created wetland in Albany was ongoing in this photo and water was already starting to collect. The wetland was part of a two-part solution to mitigate flooding in a neighborhood of the city that fell victim many times to “horrific flooding.” The city also installed an underground detention gallery under a baseball field in the neighborhood. (Photo provided) 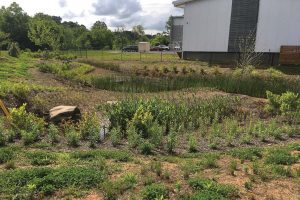 This created wetland on Craven Street in Asheville, N.C., was part of a public-private partnership with New Belgium Brewing. There’s a nearby greenway where folks can walk and enjoy nature. (Photo provided)

One city that has seen success with creating wetlands is Albany, N.Y. Joe Coffey, commissioner of water and water supply for the city, talked about the city’s experience. Prior to becoming commissioner, he worked as a consulting engineer and environmental engineer.

“During 2014 we had a couple of severe storms that dumped over 3 inches of rain in 45 minutes. We had horrific flooding throughout the city,” he said.

The catch basins and sewers were full, flooding neighborhoods. After this event, Coffey, the mayor and deputy commissioner held a public meeting and about 200 to 300 people showed up. Coffey said they invited everyone to share and it was a long meeting.

“There’s only so many times that you can say, ‘I’m sorry, I understand’ when you hear how they lost wedding pictures, childhood pictures and irreplaceable memorabilia because of flooding,” he said, adding that the problem had been going on for decades.

The mayor and neighborhood associations worked together and No. 1 on the radar was two neighborhoods — Hansen Avenue and Ryckman Avenue. Coffey said the plan was to accommodate the first 3 inches of rain. There was a two-part solution: creating gallery underground storage for 750,000 gallons at Babe Ruth Field and an adjacent wetland that has the capacity for a half-million gallons of water. Both projects lie along the Beaver Creek trunk sewer.

At Babe Ruth Field the stormwater is separated into an underground detention gallery, which acts like a detention pond but is underground, and then released back into the combined sewer to clean and separate flow into the treatment plant before being discharged into the Hudson River.

The underground gallery is made from semi-circle chambers of HDPE structures surrounded by crushed stone and covered with a membrane.

“In this case, we put an outfield over it,” Coates said, noting the baseball field’s outfield covers the detention gallery.

The city received a “fair amount of funding” for the adjacent constructed
wetland because it was recommended by the Department of Conservation.

“The cool part of the wetland is within six months it looked like it had always been there,” Coffey said.

The purpose of the wetland is that it detains and slows down the rate of stormwater and also cleanses it.

“So it’s not just water off the street; you get some settling of debris and other natural cleansing mechanics,” he said.

This project received recognition from the Green Innovation Grant Program because of its water quality impact.

A pending project the city is working on is a way to collect and retain the stormwater in the underground gallery and use it to irrigate the outfield. It is also working on connecting all the stormwater management facilities to manage release. It has an Opti system at the wetland so city workers can monitor when to open and close valves and how quickly or slowly to release the water after a rain event.

Coffey said the city has the technology and wants to take full advantage of it.

Coffey said it cost about $1.8 million to construct the project with the capacity to handle 1.1 million gallons of water. He said there is some maintenance involved, but there’s also a recreational aspect for people to enjoy nature. The completed project has also encouraged fauna and other wildlife to manage insects.

“We’ve not had a mosquito issue — there’s enough flow so it’s not standing water,” he said.

Stormwater Services Manager McCray Coates shared the Craven Street project, saying it was a public-private partnership with New Belgium Brewing and the Clean Water Trust Fund. New Belgium opened a new facility in Asheville and donated land for an easement and to widen the road in order to create a greenway. The city created a parkland complex that incorporates six-tenths of a mile of greenway.

“It’s where folks can interact with nature,” Coates said, adding that it is open to the public.

The Craven Street project was completed last year and is in an area of the city known as the River Arts District, which is two minutes from downtown Asheville and a growing area. Coates said the city “included major stream restoration and put some neat plantings in there.”

“It’s a really good process. Any sediments or solids get cleaned and filtered before going into the treatment plant or the river — it’s like a chain of water treatment,” he said. Asheville has a stormwater utility fund and projects like this that provide water quality treatment can be included.

The second project was the Lake Craig-Azalea Road project, which included a new bridge and a drive going into a soccer complex. The project also provided pedestrian and bike facilities. On the other side of the river is the Western North Carolina Nature Center, which several natural species call home.

This project saw major stream restoration to stem flooding and satisfy the high need for pedestrian access. The city was able to add a new roadway and another water feature entering into a roundabout designed to look like a soccer ball. The roundabout has a rain garden that allows water into the roundabout, and once the treated water leaves the roundabout, it enters into a stocked trout stream.

Coates said rain gardens can be designed to fit a big or small area, adding that the city always looks to add a stormwater element when creating new roadways.

“Being in the mountains we see a lot of (drainage) so stormwater management is a very big priority here in town — people in Asheville love to see water quality,” Coates said.

So whether you’re having flooding issues, want to pre-treat your water naturally or provide a serene, cool natural haven in your city, creating a wetland might be something to consider.