Shelby, Ohio’s, Historic Center District, which has been on the National Register since 1982, will be one beneficiary of the city’s Certified Local Government status. This status will open the way to seek grants to fund touch-ups, refurbishing and rehabilitation. (Public domain photo)

Every community has a story to tell. It may include the notable people who once called their city or town “home,” the important innovations and industries that contributed to the growth of the nation as well as the quirky claims to fame that put their municipality on the map. No matter what makes your community special, its history is embedded in the buildings, grounds and other tangible evidence that pays tribute to days gone by, and it is important to keep that history alive.

Shelby, Ohio, understands how vital historic preservation is to a municipality and it is doing its part to preserve the past for present and future generations. By earning its Certified Local Government status, it is now able to apply for federal and state grants that will help rehabilitate registered historic properties for the benefit of all Buckeyes.

“We did some serious work to achieve that status,” said Patricia Carlisle, chair of the Shelby Historic Preservation Commission. “It took us the better part of eight or nine months, and we were very blessed to have some people from the Ohio History Department who gave us some tips on collecting the information necessary to our portfolio that was sent first to the state and then on to Washington, D.C.”

In order to become a CLG, Shelby had to create a qualified commission of five members who designate historic properties and review changes to the historic environment. The city also had to have an ordinance designed to protect historic resources and offer guidance to those wishing to make changes to historic sites, buildings and districts as well as a procedure for identifying historic properties that can be surveyed, recorded, designated locally and nominated to the National Register of Historic Places. It also had to create a public participation program that invites and encourages citizens to engage in the community’s historic preservation program.

It was a lot of work, but in the end, it was worth it. Now that its status as a CLG is official, Shelby has just applied for a $20,000 grant that will enable it to create a solid preservation plan that will help it prioritize what projects it needs to tackle over the next five to 10 years.

“The money will help us hire a professional to assist us with the plan draft, make sure all of the components are in place and that it is a nice package that is unique to Shelby,” Carlisle said. “One project that means a lot to us is the Historic Center District that has been on the National Register since 1982. The buildings can use some touch-up, some refurbishing and some rehabilitation so that they can be repurposed.” 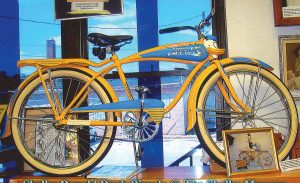 The Shelby Bicycle Company manufactured bicycles in Shelby from 1925-1953. Among its catalog of bicycles were the “Lindy Flyer,” named for aviator Charles Lindbergh, and the Donald Duck bicycles of the ’50s. Pictured is a Donald Duck bicycle that is on display at the Shelby museum. (Photo provided) 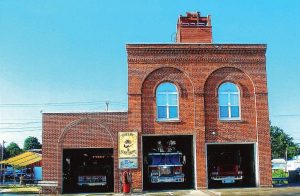 With a new firehouse being built on another location, Shelby’s historic fire engine house will be structurally examined before a new purpose is determined. (Photo provided)

One project that will likely benefit from the preservation plan in time is the Shelby fire station, which was built in 1872. For decades, the city has been in need of a new building for its fire department, and when local businessman and philanthropist Grant Milliron offered to donate the money for a new one, Shelby Mayor Steve Schag said it was a “grant” the city couldn’t turn down.

“Mr. Milliron had been directly impacted by the Shelby Fire Department, (which) came to his aid when his recycling facility was impacted by a major fire,” Schag said. “With the new building, everything will be under one roof where our vehicles, at the current moment, are stored on other sites.”

While the footers for the new building have been poured and the city is excited about the new fire station, there is a lot more buzz about what is to become of the historic site.

“It is an important building and we realize that, so at this time, we are having it evaluated by an engineer for structural stability, and when we received those results, then we will turn the recommendations over to the city council and then begin making future plans for what we might do with it,” he said.

Tom Claybaugh, a local resident who has been involved with Shelby history for three decades, said when considering a site for historic preservation, it is important to get the public interested in it and invite their input. He said the more you encourage the public to get involved, the better the outcome.

“History isn’t only about what happened in the past,” Claybaugh said. “History is made every day, and when you preserve those things that are important for future generations, it can help a community’s economic development in the here and now.”

And that benefits everyone. According to the National Trust for Historic Preservation, there are six practical reasons to preserve old buildings. Naturally, there is intrinsic value in keeping buildings that are constructed of quality materials and rare hardwoods. A building may be full of interesting details and hidden gems that cannot be reclaimed once they have been destroyed. New businesses actually prefer to be in old buildings as do other organizations — as demonstrated by Shelby’s only library, which is on the National Register of Historic Places. Older buildings tend to attract people, which can encourage foot traffic and spending in a community’s downtown or main street districts. They are a reminder of a city’s cultural heritage, and once they are gone, they can never return. Shelby’s rich history is one that Carlisle, Schag and Claybaugh are determined to preserve now and in the future.

“As I get older, preserving history has become more and more important to me,” Claybaugh said. “You appreciate the years that are behind you and you want to make sure to try and keep the past intact. Of course, not every building can be saved, but I think we should do what we can to separate the good ones, resurrect them a bit and make sure everyone benefits from them.”

Founded: 1834
Incorporated: 1921
Population: 9,171 (2012)
Notable history: The world’s longest-lasting incandescent light bulb — known as the Centennial Light — was created in Shelby; it has hung from the ceiling of a California firehouse for nearly 113 years. The city was also home to Shelby Gum Co., the manufacturer of Shelby’s Original Blow Gum. A pioneer in cycling, the Shelby Bicycle Company was located there, and each July, the city holds Shelby Bicycle Days.