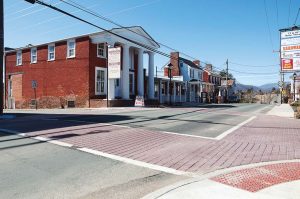 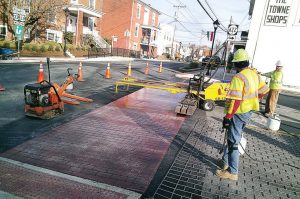 Workers give the appearance of brick to a crosswalk in downtown Stanardsville, matching the surrounding buildings’ historic brick charm. Grants have helped move the streetscape forward. (Photo provided) 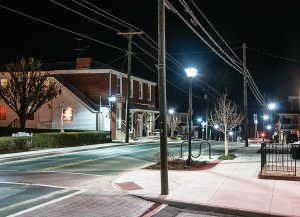 Streetlights have been installed at key positions, providing another boost to safety and appearance. Positioned as a gateway to the Blue Ridge Mountains, Stanardsville hopes to tap into tourism and offer an unique experience for visitors. (Photo provided) 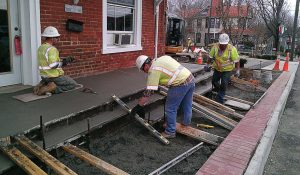 Since 2014, the town of Stanardsville, Va., has dedicated significant amounts of time and funding to the revitalization of the downtown corridor. While many projects have been focused on refreshing the town’s physical appearance, resident well-being, quality of life and safety have also been major considerations in the allocation of funds.

In 2016, the Virginia Department of Housing and Community Development awarded the town a $1 million downtown revitalization grant to be used for facade improvements on commercial buildings on Main Street, housing rehab projects for low-to-moderate-income families and the construction of a performance pavilion and farmer’s market in the town. Previously, the town had been awarded more than $400,000 in grants for streetscape enhancements including the construction of pedestrian-minded sidewalks and crosswalks, installing enhanced street lighting, and beautification efforts throughout the downtown area.

“The common thread of all of these projects is to improve the physical appearance of the town and provide the kind of things that will entice people to come and visit,” said Roy Dye, executive director of Stanardsville Area Revitalization, or STAR. “The physical improvements aren’t just cosmetic, though. They ensure the safety of pedestrians, make the town more walkable and, therefore, encourage more activity downtown both from residents and visitors.”

“We hear a lot of positive comments about these efforts, especially about the streetlights,” Dye said. “They allow us to further beautify the town by adding banners — like welcome signs, event promotions and holiday celebrations — and also make downtown safer and more welcoming once night falls.”

Mayor Gary Lowe said the project brings nothing but good things to Stanardsville, and the addition of the major project — the performance pavilion and farmer’s market — will be especially vital.

“This is great news for Stanardsville,” he said in a 2016 press release. “We will work with property owners to renovate storefronts in the downtown area and start to build the performance pavilion and farmer’s market. Together with the new sidewalk extensions, this will give a tremendous boost to our ongoing revitalization efforts.”

The initial project was so well-received the town decided to use some of the funding from the second grant to continue these efforts.

“Phase two will extend the new sidewalk network on Main Street by expanding those sidewalks further downtown to the shopping center. Right now, people who walk there are walking in the street and it’s a very unsafe situation,” Dye said. “The expansion will continue throughout the rest of town, too. The lengthier extension going east will make it easier for people to walk through town to the pharmacy and will allow low-and-moderate-income citizens easier and more direct access to a local nonprofit that provides them services.”

In addition to new sidewalks, streetlight installation will continue in both directions, as well as minimal beautification efforts, Dye said.

The latest town census reports only about 400 permanent residents in Stanardsville, but Dye believes the town’s location at the base of the Blue Ridge Mountains provides a unique opportunity for a rich tourism industry.

“We’re a gateway to the Blue Ridge Mountains, so the thought is a lot of folks coming down the mountain will see as they approach town things that spark their interest,” Dye said. “The hope is a robust farmer’s market and accompanying bandstand will attract visitors, who can then enjoy our new sidewalks and improved landscaping.”

The farmer’s market and performance pavilion are slated to sit near the town high school, a hub of community engagement. The hope, Dye said, is that each Saturday residents can enjoy live music as they do their weekly shopping.

“Our thought is every weekend there will be some kind of music going on,” he said. “Coming to the market will be an event — residents will see their friends, listen to music, even grab a bite to eat.”

The revitalization has been well-received by residents, and even contributed to an uptick in commercial business presence in the town.

“We’ve had a new bank open a branch office in town, a new restaurant recently opened its doors, a lawyer’s office opened here and an optician is now downtown on Main Street, too,” Dye said. “Our efforts are gradually beginning to have the impact of attracting new commercial enterprises, which is what we’re trying to do.”

The revitalization of downtown Stanardsville is long from over, but Dye said the effort that went into getting to where they are now has been worth it, and he encourages other cities to do the same.

“There’s a lot of grant money available out there,” he said. “And projects like this are the kind of thing communities should be doing to better the quality of life for their residents. It’s been worth it tenfold for us.”