Imagine a place so pristine and idyllic its signal character of perfection is also its most prominent target for criticism.

Welcome to the “too good to be true” master-planned community of Celebration, Fla., population 7,427.

“Town” is not exactly the word Celebration uses to define itself. The community’s website touts the nostalgic character of the place reminiscent of the halcyon days of 1950s small-town America.

“If you’ve visited Celebration, it’s likely that our residents have already helped you feel part of the community,” notes the website, www.celebration.fl.us. “Perhaps it was a simple smile someone shared as they passed by on the street. Maybe it was a friendly chat you had with a stranger while shopping.

“There’s a reason Celebration is not a town, but a community in every positive sense of the word. While the population is diverse, the residents share a strong community spirit and a desire for a friendship with their neighbors.

“Relationships develop in the many programs, activities and opportunities offered within the community. Residents get to know their neighbors while taking part in local school and sports programs; enjoying the walking trails, parks and amenities; enjoying our restaurants and shops; participating in organizations, civic and social groups; and playing an active role on the committees and boards responsible for operating Celebration.”

The community, situated a few miles south of Disney World in Orlando, is the brainchild of Walt Disney, who sought to create a sustainable community in the style of his Experimental Prototype Community of Tomorrow, commonly known as EPCOT. 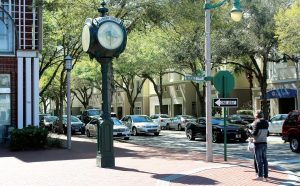 All public fixtures, such as street clocks and street lamps — even manhole covers — are crafted to evoke memories of the halcyon days in small-town America. (Photo by Michael Rivera via English Wikimedia Commons) 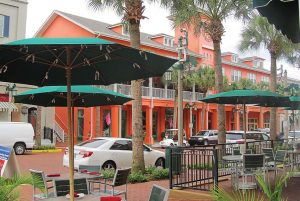 Only the residents’ personal vehicles have a 21st century look in Celebration. The architecture, streetscape and public fixtures were all designed to emulate a 1950s feel. (Photo by Jade-Orlando via English Wikimedia Commons) 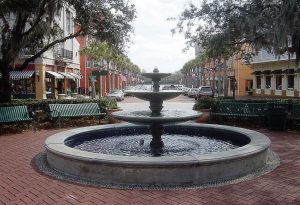 The fountain in the spotless downtown center of Celebration reflects the community’s commitment to maintain a pristine and nostalgic atmosphere. (Photo by Bobak Ha’Eri from en.wikipedia) 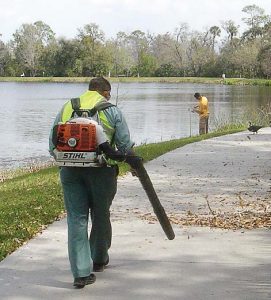 The public employees of Celebration scrupulously ensure the community is kept clean. Littering is stiffly and immediately fined and leaves are removed from walkways at the first feasible opportunity. (Photo by Bobak Ha’Eri from en.wikipedia)

He secretly bought up just shy of 5,000 acres of land west of Kissimmee, Fla., planning to build, as he marketed it, “a place that takes you back to that time of innocence.”

He originally envisioned a community of 20,000 residents, but subsequently halved that goal. All the quaintly styled homes were to be within walking distance of a charming, pastel-colored community square in the center of town.

Disney passed away in 1966, but in the early 1990s, the company he left behind established the Celebration Company and continued the dream, investing $2.5 billion in the project.

The first phase of residential development opened for occupancy in the summer of 1996 and Celebration earned recognition in 2001 as “New Community of the Year” by the Urban Land Institute.

Consistent with the original intention, Disney Development Company divested its ownership of Celebration in 2004 and turned over a majority of seats on the homeowners’ association board to the local residents. Organized under Florida law as a community development district, voting on administrative matters is restricted to local landowners.

In a 2004 New York Times article published shortly after the planned divestment, one resident, Pam Shaw, treasurer of the association board, spoke of the paradigm shift in the locals acquiring political control of the community. “I moved here because I loved Disney. We had such blind faith. But this was just a business venture for them, and now it’s up to us. Their success is based on financials, and ours is going to be more, ‘Are you proud to live here? Do you love your life here?’”

The residents indeed take a day-by-day pride in Celebration. The streets and sidewalks are kept squeaky clean and monitors patrol the public areas, promptly and strictly fining such malefactions as littering or letting one’s lawn grow too high.

Building codes and other regulations are rigid, even dictating the type of vegetation a resident can grow in his or her yard. Pink flamingoes, ubiquitous in other communities around the state, are strictly verboten.

Such meticulous oversight serves to protect the residents’ investments. The average home in Celebration sells for $300,000 and thousands of visitors a week browse the community’s selection of boutiques, restaurants and other attractions.

Some critics of Celebration assail its artificiality, citing the hourly winter snowfall in the community square being composed of soap flakes and the ice rink consisting of an opaque white plastic sheet. One expositor even pontificated the community ambiance was “creepy.” Others likened life in Celebration to “living in a bubble.”

Not so, say the residents, who participate in Celebration’s annual events, such as a communitywide yard sale, art show, exotic car festival, Radio Disney holiday concert, Oktoberfest and the Great American Pie Festival, which is televised on The Food Network.

One writer, jamegumm, responding to a critical article on www.gizmodo.com, summed up the reasons for Celebration’s quaint charm.

“I think Celebration has been a very noble experiment on a number of different levels, minimizing the importance of the car and giving its residents a choice to walk or bike; building commercial and residential space in close proximity to each other; integrating residences for people of varied income levels; giving civic buildings an appropriate sense of scale in relation to surrounding structures; applying a sense of organization to the aesthetics and visual language of things like signage, lighting fixtures, typefaces, etc.”