A variety of tiny homes can be constructed. Some can be a small home on a foundation, similar to other single-family homes, and others can be on wheels, which are more similar to a mobile home. (Photo provided)

In Des Moines the concept of multiple tiny homes was brought to the city at a pre-application meeting. The interested party was hoping to learn more about the processes necessary for such an endeavor and code requirements though they have not formally submitted any application.

Michael Ludwig, planning administrator for the city, explained, “In Des Moines, they were encouraged to apply under existing, planned unit development. Their plan was more similar to a campground with pods of tiny homes around a community building. Realistically their concept at the time was more like little cabins.”

The biggest issue appeared to be attempting to find a property within the necessary budget and proposing a rezoning process. Neighborhood meetings must then take place to gauge the reactions of the local residents. Ludwig has not been informed that any meetings were held by the interested party to pursue this process.

A minimum square footage for living requirements must also be met under the city building codes. “With the existing code perspective and lot size requirements, it was hard to fit into existing code requirements,” shared Ludwig. He went on to state the city’s biggest overall concern with the idea proposed was that each unit did not have its own bathroom, which would make it a challenge to call the unit a single-family home.

Other concerns involved the accessibility to sewer and utilities in places the interested party had chosen as areas of interest. The fire department had concerns regarding access to the homes and the durability of materials was brought into question. Although not in the original plan, the interested party was encouraged to include some form of porch or semi-private space outside of the dwelling.

Prototype homes were built with the assistance of local churches to help bolster support for transitional housing. In order to gain awareness, these home prototypes would be parked at various churches throughout the city. If it was determined that this tiny home campground would not be appropriate within city limits, the city has considered plans to either get services to them or have certain services provided on site if an acceptable place was discovered in the unincorporated metro section of the city. 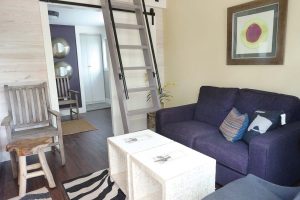 The interior of a tiny home includes the basic necessities of any other home, simply in a significantly smaller space. Some can even include multiple bedrooms and a loft area. (Photos provided) 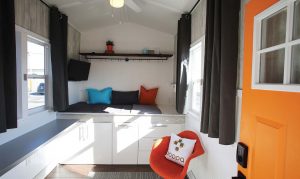 With many services for the homeless available within Des Moines proper, Ludwig went on to say that there are many housing options available for individuals or families who are struggling.

“Des Moines, as a central city, has a lot of early, turn of the century housing and post-World War 11 GI housing, which are very modest, smaller homes that are already available,” Ludwig said. “Our housing stock provides smaller, more historic tiny homes in Des Moines proper that are not in the surburbs. If people really want to downsize, there’s quite a bit of opportunity for them to downsize without going to the tiny home aspect.”

Des Moines is showing progressive movement with its zoning ordinances by drafting a code for the first comprehensive rewrite since 1965. In this newly drafted code, such issues are addressed with the proposal to allow some accessory housing units as well as lowering square foot lot requirements to potentially as small as 50 feet wide. In this way they are trying to address both affordability and the desire for smaller lot sizes. A best-case scenario for this code would see it effective Sept. 1; however, it is dependent on the extensive review period. The city has addressed many of the community’s questions and concerns but it still must release a public hearing draft. After this is done, it will be approximately four months until the code changes can go into effect. “It has been a long and arduous process,” Ludwig claimed.

“In general, between building codes and rental codes for minimum occupancy and square footage, there is probably some kind of minimum threshold per living occupants,” Ludwig commented. “Building codes are at least cognizant of a tiny home, though many would still have bathrooms, gas and electric.” 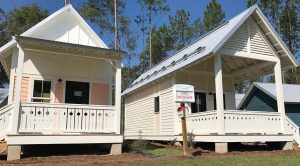 Tiny home communities seem to be more popular outside of city limits, such as The Dwellings in Tallahasse, Fla. However, the city’s building code requirements would be the same as anyone pursuing building a single-family home subdivision. (Photo provided)

Just as in Des Moines, city officials in Tallahassee are working on a case-by-case basis on the definition of what constitutes a tiny home. John Reddick, senior planner in the growth management department in land use and environmental services, discusses the requirements for four options that he has considered.

Other than meeting the Florida building code, if an individual wishes to build a tiny home as the primary structure on a single lot then the city has no restrictions in terms of minimum house size. “It would just have to be within a zoning district that allows single-family homes, typical of any other style of single-family home,” Reddick explained.

However, this does not include specific neighborhoods that have their own home size and design requirements.

If a tiny home were to be built on wheels, then it would likely be defined as a mobile home. Under this designation, it would only be allowed in particular zoning districts. Certain development standards, such as property line setbacks for that zoning district, would still need to be met.

Another way in which a tiny home might come into play would be as a mother-in-law suite. This would involve a home being built on the same lot as an existing house but smaller than the existing house.

“In this case, we do have a size restriction,” Reddick clarified. “But the tiny home concept typically prevents them from approaching our maximum size restrictions, so we rarely run into that issue.” The necessary requirements for this type of tiny home would be that it must be set on a foundation, not on wheels, and would be subject to the same development standards as any other similar structure.

For a tiny home community, the requirements would be the same as pursuing a typical, single-family home subdivision. In this option, depending on zoning requirements, they could potentially have the option of either each tiny home being built on its own lot or multiple units being built on a single lot if multi-family homes were allowed. Any pros and cons related to a tiny home community would simply depend on what the developer was looking for in the project. Normal permitting and development standards would still apply.

A widely publicized tiny home community is The Dwellings. It is a program-based housing option made available to single men and women as well as families with children. Applications must be filled out for acceptance and, once accepted, they are given three housing floor plan options — small, medium and large — in which one, two or three individuals can reside respectively.

“This falls outside city limits so it was permitted through Leon County Development Services and the environmental management department,” Reddick explained.

• Each dwelling unit must have a minimum of one habitable room that is at least 120 square feet of floor area and 7 feet in horizontal dimension.
• Other habitable rooms must have a floor area of at least 70 square feet. The only exception for these is a kitchen.
• Ceiling height of all habitable spaces should be at least 7 feet high. Some exceptions can include sloped ceiling and bathrooms. Specific specifications and dimensions also exist for any stairways inside the dwelling.
• Each dwelling must have bathroom facilities and a kitchen that includes a sink.
• All plumbing fixtures must be connected to an approved water supply that is able to provide both cold and hot water as well as either a sanitary sewer or approved private sewage disposal system.
• Every sleeping room, along with habitable attics and basements with one or more sleeping rooms, must have a minimum of one emergency escape and rescue opening.
• Each dwelling must also contain a means of egress as well as an egress door that is side-hinged and a minimum of 78 inches tall and 32 inches wide when opened 90 degrees. The egress door should be easily opened from inside the dwelling.