↓
Home→Uncategorized→A casino in your backyard?

There has been gambling in the U.S. since the beginning. Yet, over the years, how it’s regulated has varied, and the same goes for how the general public and local governments perceive it.

Currently, the nation is seeing the possibility of significant gambling reform, especially when it comes to sports betting because experts expect the law prohibiting states from allowing sports gambling to be overturned by the United States Supreme Court soon.

If the law is overturned, it will then be up to state government officials on whether or not to allow sports betting in their state.

Even though the overall financial impact of sports betting on a state would be significant, there still may be many states that elect not to allow it, similar to how more than 200 municipalities in Pennsylvania recently exercised their right to prohibit a mini casino from coming to their towns. Thus, forgoing the robust financial contributions that a casino would likely bring to the community.

The reasons local governments choose to exercise this right are varied. Some local municipalities said that they didn’t have the room for it while others thought that having one would go against their conservative ideology.

Part of this is also the township’s desire to remain “rural” by preventing too many businesses from inhabiting the area. George said the decision for his town to vote against hosting the casino was unanimous and the deliberation process was relatively quick, with little support for possibly hosting a casino.

Other Pennsylvania municipalities and local governments prohibited the casino simply because of geography: They would not have anywhere to put one, even a casino that’s referred to as “mini.” “That’s a large facility,” said Mary Swankler, the borough manager of North Irwin, Pa. “We don’t have anything like that. Nothing.”

Swankler said that if her borough did have space, she suspects that there would have been a debate amongst residents, which she already heard rumblings of when Pennsylvania lawmakers said they could have a casino in the first place. Ultimately, she is unsure what would have happened if North Irwin did have the capacity to host one, but she does understand why some residents were ethically opposed to it. 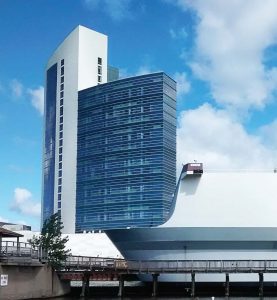 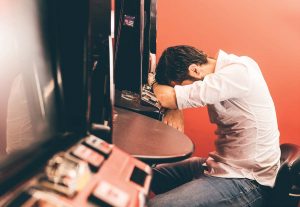 Concerns of gambling addiction and its potential impact on the community and local families has led some municipalities to turn away proposed casinos. (Shutterstock.com)

“When you walk to a casino, what’re the things that you see on the walls and in the elevators?” Swankler said. “(A sign that says) if you have a gambling problem, then call this number. (Gambling) addictions like that destroy families just like any other addictions do.”

According to Casino.org, an online site for gamblers, places where gambling is part of the culture are more likely to have larger percentages of their population dealing with a serious gambling problem. For instance, a Web Wallet analysis titled “2017’s Most Gambling-Addicted States” determined that Nevada experienced more “excessive gambling” than any other state in the U.S., followed by South Dakota and Montana, which also have a significant gambling culture.

Overall, more than 2 percent of adult Americans are said to be impacted by gambling disorders.

However, it’s unclear how much casinos themselves are contributing to this problem. Obviously, they provide an avenue for adults over the age of 21 to readily gamble, but what else are they doing to contribute to the problem?

That’s why, as Swankler said, many casinos also have signs and literature available to help people with gambling addictions. Additionally, to combat some of the potential damage it may have done to the community — perhaps also to its image — the Blue Chip Casino also participates in a number of charitable events.

Each year, the Blue Chip Casino hosts many events in the community to benefit charities and other nonprofit organizations, such as a large silent auction where all of the proceeds go to the United Way. And that’s only the tip of the iceberg when it comes to the economic impact it has on the county.

“It really helps the community in many different ways,” Seitz said. “First of all, it employs a lot of people and all of those people pay taxes, which really helps out all of the communities. The Blue Chip is very generous in helping and supporting nonprofit organizations throughout the community. Blue Chip provides finances or money for developing in Michigan City and LaPorte County.”

In fact, in the Indiana Gaming Commission’s 2017 annual report, more than $45 million in taxes were generated from the Blue Chip Casino, with roughly $38 million coming from wagering tax and roughly $7 million coming from casino admission tax. Much of that money goes to LaPorte County, Michigan City and the state of Indiana. That’s why, even given some of the difficulties that a casino can cause for its community, Seitz views the Blue Chip Casino as a net positive.

“It’s one of the economic engines of the community and an asset to Michigan City, the city of LaPorte and the county,” he said.

Casinos can contribute to a number of problems in its community. It can ruin families and lives, but the gambling industry significantly benefits municipalities and creates thousands of jobs while providing its community with ample economic development. It’s no wonder that so many people are divided when it comes to a casino’s overall impact.